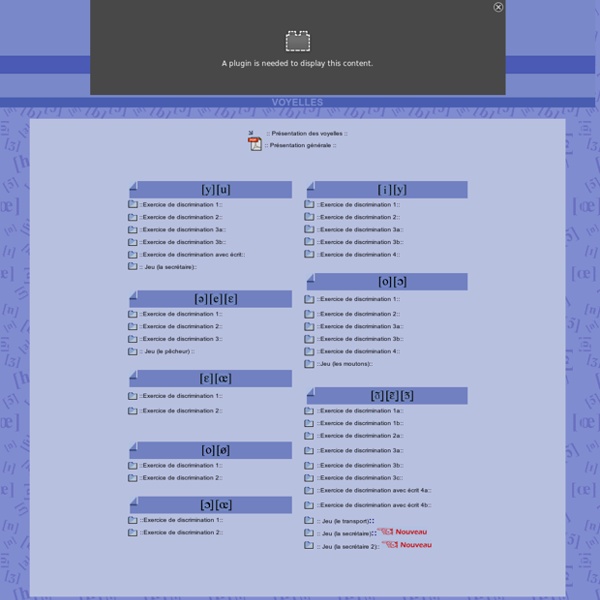 Learn Spoken French: 10 French Pronunciations You Won't Learn in School Want to speak casually cool modern French? Then you’re ready to take your colloquial French up a notch. You’re already working on mastering French slang. Top 10 French Pronunciation Mistakes and Difficulties Many students find that pronunciation is the hardest part of learning French. The new sounds, the silent letters, the liaisons... they all combine to make speaking French very tricky. If you really want to perfect your French pronunciation, your best option is to work with a native French speaker, preferably one who specializes in accent training. If that is not possible, you need to take things into your own hands, by listening to French as much as possible, and by studying and practicing the pronunciation aspects that you find most difficult. Based on my own experience as well as that of other French learners, here is a list of the top French pronunciation difficulties and mistakes, with links to detailed lessons and sound files. Pronunciation Difficulty 1 - The French R

The 6-step Guide to Mastering French Phonetics The top of a ferris wheel can seem so high up from the ground. But when you’re on the slow, gentle ride, you know you’ll eventually reach the top. Speaking French without a foreign accent can also seem a long ways away. But with a strategic approach that gradually gets you closer and closer, you will get there. And do you know what will turn the wheel to keep you progressing on this pronunciation promenade? French pronunciation ~ Soirées entre amis In this episode: Pol shares his thoughts on always partying with the same group of friends… To use the dictionary from French to English: Click or Tap maroon words in the story below. Learn French online one fun story at a time; also improve your pronunciation with integrated French pronunciation audio and remember French vocabulary easily through short stories. Practice is the only way, don’t delay. To make your experience worthwhile, >> sign up for a membership now to have continuous and unlimited access to all episodes.

prononciation - All French phonemes in one sentence? - French Language Stack Exchange Regarding: "The first sentence lacks [ɑ] (a distinct phoneme from [a] in most French dialects), [h] (only found in a few interjections) and [ŋ] (found in some English imports, not merged with [ng] by all speakers). Apart from the lack of [h], I think there are speakers for which it works." According to: [ɑ] is now pronounced as [a] by most French speakers in France. Madame Belle Feuille: j'aime lire - teaching reading in grade 1 French Immersion What's your routine for teaching reading and specifically French sound blends in grade 1? Here's an overview of mine. September to December we review the letter sounds from kindergarten using Jolly Phonics. Sound blends are introduced over 10 weeks beginning in January. Guided reading routines begin in March.

Number of phonemes (vowels, consonants) by language in Europe - Linguistics A phoneme is a sound, or set of similar speech sounds, which are perceived as a single distinctive sound by speakers of the language or dialect in question. For example, the "c/k" sounds in cat and kitten represent the English phoneme /k/. Phonemes are divided in vowels and consonants. Sound words poster (French-English) Getting your own classroom and being able to decorate it was one of the things I was most excited about when I landed my job. The things you put on your walls can be motivating, inspiring or simply just eye-catching. In this post, I hope to show you how I've made the wall space in my room work for me. Opinions/Adjectives Board French Phonetics Phonology and Phonetics are two different fields in the science of linguistics that study how people make sounds and pronounce words. Phonology (and phonetics) should be interesting because knowing how the French make their sounds could help French language learners across the globe acheive a pronunciation “non-marquée“, that perfect pronunciation. The whole reason people have foreign accents in the first place is because their mouth cannot adjust to the correct ways of creating certain phonemes! In this extensive article, I will introduce many cool topics, for example: Did you know that in French, syllables have the tendency to end with a vowel? This is called open syllabication.

The 6-step Guide to Mastering French Phonetics The top of a ferris wheel can seem so high up from the ground. But when you’re on the slow, gentle ride, you know you’ll eventually reach the top. Speaking French without a foreign accent can also seem a long ways away. But with a strategic approach that gradually gets you closer and closer, you will get there. l'accentuation l'accentuation In French, stress (l'accentuation) is placed on the final syllable of a word. This is very different from the placement of stress in English which varies according to the word itself.