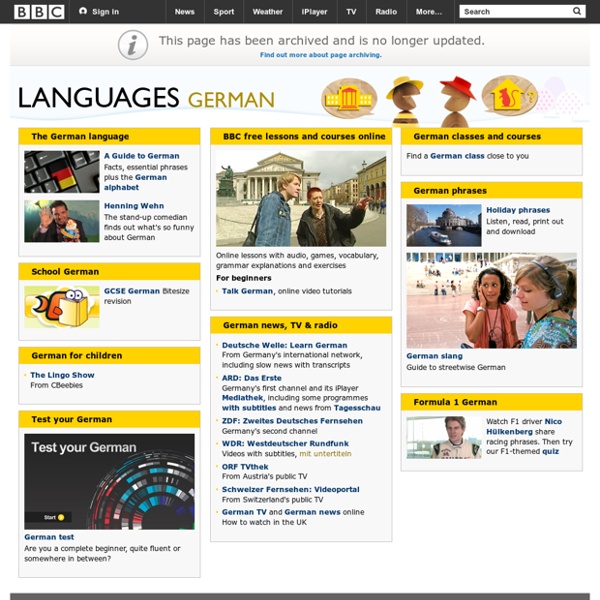 The Homeschool Den Thursday, January 10th, 2013 Last semester, we spent time reading simple stories together in German. There are a couple of stories we downloaded from Amazon, Peter und das Huhn and Der Kartoffel-troll. We read them aloud together and I had the kids do a few activities related to those stories. Peter und das Huhn ($0.99) is considerably easier than any of the stories in Der Kartoffeltroll ($1.50), but the kids enjoyed them both. Say what you type in French : Say what you type in Spanish the best way to start with French and Spanish! Choose the language you want to listen your text, type your text in your selected language then click on "say it". You can change the character or the voice if you want.

7 German TV Series To Help You Learn German Tired of struggling with irregular verbs and breaking your head over declension rules? Why not put your textbook aside for a while and watch some German TV series? Even if you don’t understand everything at first, you’ll be surprised how much you can glean just from body-language, mimicry and context. In this post, I’d like to showcase a few German TV series which are both popular among native audience and might be a good starting point for German language learners. Loriot Learn Dothraki with Living Language David J. Peterson was born in Long Beach, California in 1981. He attended UC Berkeley from 1999 to 2003, and received a B.A. in English and a B.A. in Linguistics. He then attended UC San Diego from 2003 to 2006, where he received an M.A. in Linguistics.

University of Cambridge Language Centre Overview This is a web-application developed by the University of Cambridge Language Centre for basic level students of German. It focuses on listening and reading skill but it also includes many activities that help learners prepare for speaking and writing. The three sections invite you to acquire the functional language needed to go out and about in town, to travel and to organise your leisure time. The following reference materials are included in the German Basic Software in German Essentials, German Verbs and Basic German Grammar. German Essentials, German Verbs and Basic German Grammar Practise German free of charge City of Words An Online Game for learners of German at A1-level. In the ficticious "City of Words", you collect new words, use them in short sentences, and you can test your skills in short games with other players. Vocabulary trainer app Learn German on the go with the Goethe-Institut’s vocabulary trainer app. The Goethe-Institut’s new mobile vocabulary trainer helps you to practise and improve your German by adding new words to your vocabulary even on the go.

Learn German by watching movies and TV series with German subtitles German language > Movies in German with German subtitles Add movie to this section On this page you will find a list of movies in German that you may use to learn and improve your German. You will not find links to download movies here, but instead there is some unique information that will help you a great deal in your studies of German language - it's our user reviews that will help you choose the best movies that suit your level. Such reviews are indicated by a little sign near the movie title. Vocational training in Germany – how does it work? A dual vocational degree (ausbildungsintegriertes duales Studium) is a special form of degree programme. It integrates studies at a higher education institution such as a university or Berufsakademie and on-the-job training at a company. This means that you will obtain both a degree and a recognised professional qualification.

Top 5 Easy-to-read French Books for French Learners Are the simple reading passages in your French textbook boring you? Have you tried reading the news in French, but found that you crave an actual story? Well then you’re in the right place! Pulling any old French book off the shelf can be a daunting task. Given the variety of styles that you’ll come across in French literature, you may find yourself discouraged to see you understand less than half of what you’re reading… all because you unfortunately chose the wrong book.

German Gender Hints - Noun Gender in German Nouns and Gender in German You are here: German for Beginners > Lesson 3 > Gender Hints > Noun Suffixes Most world languages have nouns that are either masculine or feminine. German, besides capitalizing all nouns, goes them one better and adds a third gender: neuter. The masculine definite article (“the”) is der, feminine is die, and neuter is das. German-speakers just seem to know whether Wagen (car) is der or die or das. Learn German Online for free - deutsch lernen online - manual note (zip, videos) pages with this sign contain a video Prologue How does German sound? Pronunciation Personal pronouns in basic form (Nominative) German Words and Phrases 1. Basic Phrases Ich is not actually pronounced ikh, unless you are speaking a northern dialect of German. If you are speaking a southern dialect, then it is more like ish.