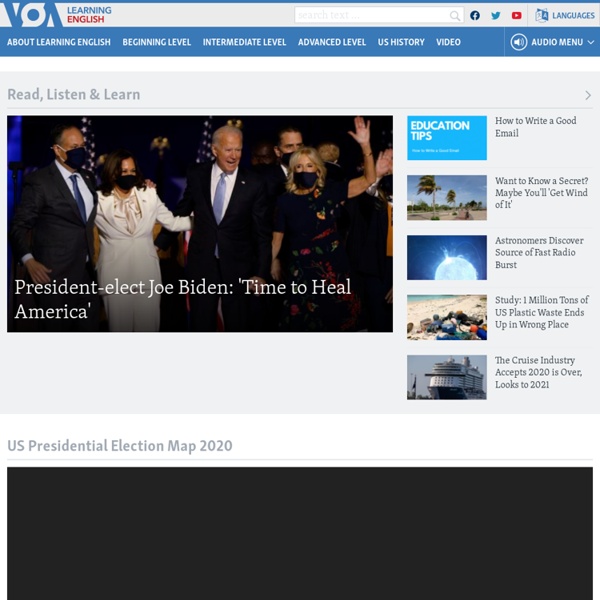 American Folk Music, Traditional to 'Freak' BARBARA KLEIN: Welcome to THIS IS AMERICA in VOA Special English. I'm Barbara Klein. This week on our program, we explore American folk music, the music of the people. "Good Night Irene," is an example of a traditional folk song. That means the song is so old, no one really knows who wrote it. American Folk Music, Traditional to 'Freak' Digital Storytelling with Voicethread (and How to Do It Offline) As regular readers of this blog will know, I love doing things in class that are simple yet productive and full of student-generated content. It might be something like a drawing activity that leads into a whole series of other tasks, a couple of everyday items as the basis of discussion, or, as featured on my recent guest post on Teaching Village, a basic digital camcorder and some very creative young minds. Another simple but effective web 2.0 tool I really like using is Voicethread. I love the interactivity it offers with different people able to leave messages on the same presentation slide as well as the option to combine images or text with audio or video comments.

Photoshop Masking & Compositing: Advanced Blending In this exercise, I'll explain the difference between the two numerical blending options here inside the Layers panel, the first of which goes by the name Opacity and the second of which is called Fill, short for Fill Opacity. I'm working inside a file called Sample type.psd found inside the 01_intro folder. And notice that we have two identical words set in the font Myriad Pro, both of which are located on independent layers. I'm going to start things off by making the top layer active, then I'll click on the word Opacity in order to highlight its value there in the Layers panel, and I'll change the value to 25%. Then I'll click on Sample #2 in order to make it active, click on the Fill this time in order to make its value active, and change it to 25%. And you'll notice that both effects are absolutely identical to each other.

How to think in English? I learned English all by myself, and I speak just like a native American (I'm not interested in the British accent :P). I am learning Italian and I speak that language the way Italians do. The good thing is that I think in Spanish (my native tongue), English, and now Italian. The most important thing that I believe you should do is to separate language from ideas. I mean, you can have a visual idea (in your mind) about a situation, something you want to do, or something you saw, etc; here is where you need to stop "listening" to yourself speaking in your native language. So...You Wanna Be A Blogger So this is a blog. Yep. It really is, or at least I want it to be.

Photoshop Masking & Compositing: Fundamentals In this exercise, I'm going to introduce you to the Channels panel and explain how it compares to the Masks panel just so that you have a sense of where you stand right from the start where masking is concerned inside Photoshop. I'm working inside an image called Toucan with swatches.psd and it's based on a photograph from the Fotolia Image Library, about which you can learn more at fotolia.com/deke. But, I've made a few modifications to the image. If you go to the Layers panel and Alt+ Click or Option+Click on the eyeball in front of the Background layer, you will see the original photographic image. Now, it's a very colorful image indeed.

American Stories - VOA - Voice of America English News VOASites by Language Top Stories: April 15, 2014 18:51 UTC Programs Audio / American Stories Learn English as you read and listen to a weekly show with short stories by famous American authors. Collocations What is a collocation? A collocation is two or more words that often go together. These combinations just sound "right" to native English speakers, who use them all the time. On the other hand, other combinations may be unnatural and just sound "wrong". Look at these examples: Why learn collocations? 23 Free Learning Tools For Monological, Dialogical and Polyphonic Forms of Teaching How Students Benefit From Using Social Media 12.98K Views 0 Likes A lot of criticism has been leveled at social media and the effect it has on the way students process and retain information, as well as how distracting it can be. However, social media offers plenty of opportunities for learning and interactivity, and if you take a moment to think about it, it's not too hard to see how students benefit from using social media. 10 African-American History Month Teaching Resources 1.26K Views 0 Likes