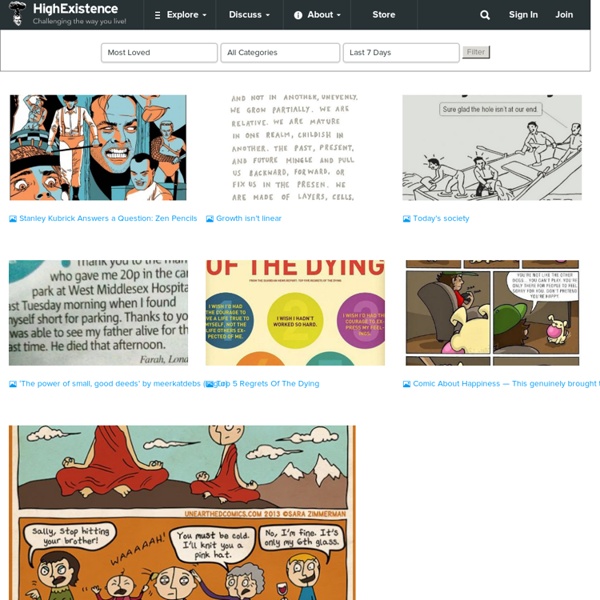 Most Loved All Categories Last 7 Days Stanley Kubrick Answers a Question: Zen Pencils Growth isn’t linear Today’s society ‘The power of small, good deeds’ by meerkatdebs (imgur) Top 5 Regrets Of The Dying Comic About Happiness — This genuinely brought tears to my eye… Sometimes family gatherings are the truest test of one’s equanimity… I hate small talk My brain is melting… This is the new Urban “We Must Do Away With the Specious Notion…” — Buckminster Fuller Einstein on the “cosmic religion” Hierarchy of Possession Questions Nietzsche Remembrance Day 123102030Next

The magic button — Make Everything OK 25 Beautifully Illustrated Thought-Provoking Questions A question that makes you think is worth asking… At the cusp of a new day, week, month, or year, most of us take a little time to reflect on our lives by looking back over the past and ahead into the future. We ponder the successes, failures and standout events that are slowly scripting our life’s story. This process of self reflection helps us maintain a conscious awareness of where we’ve been and where we intend to go. It is pertinent to the organization and preservation of our dreams, goals and desires.

National Geographic Photo Contest 2011 - Alan Taylor - In Focus - The Atlantic - StumbleUpon National Geographic is currently holding its annual photo contest, with the deadline for submissions coming up on November 30. For the past nine weeks, the society has been gathering and presenting galleries of submissions, encouraging readers to vote for them as well. National Geographic was kind enough to let me choose among its entries from 2011 for display here on In Focus.

The Top 10 Relationship Words That Aren't Translatable Into English Here are my top ten words, compiled from online collections, to describe love, desire and relationships that have no real English translation, but that capture subtle realities that even we English speakers have felt once or twice. As I came across these words I’d have the occasional epiphany: “Oh yeah! That’s what I was feeling...” Mamihlapinatapei (Yagan, an indigenous language of Tierra del Fuego): The wordless yet meaningful look shared by two people who desire to initiate something, but are both reluctant to start. Oh yes, this is an exquisite word, compressing a thrilling and scary relationship moment. It’s that delicious, cusp-y moment of imminent seduction.

Muhammad: Legacy of a Prophet . Muhammad and Women t the time of Muhammad's birth, women in 7th century Arabia had few if any rights. Even the right of life could be in question, since it was not uncommon for small girls to be buried alive during times of scarcity. In the Qur'an, it is said that on Judgment Day "buried girls" will rise out of their graves and ask for what crime they were killed. Part of Muhammad's legacy was to end infanticide and establish explicit rights for women. Islam teaches that men and women are equal before God.

Neil deGrasse Tyson: Atheist or Agnostic? More ideas from Tyson Transcript I'm often asked – and occasionally in an accusatory way – “Are you atheist?” And it’s like, you know, the only “ist” I am is a scientist, all right? Home - Freedom From Religion Foundation