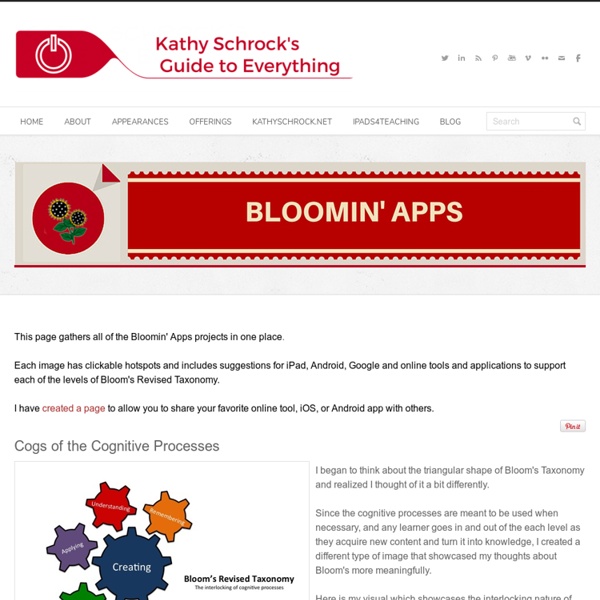 This page gathers all of the Bloomin' Apps projects in one place.Each image has clickable hotspots and includes suggestions for iPad, Android, Google and online tools and applications to support each of the levels of Bloom's Revised Taxonomy.I have created a page to allow you to share your favorite online tool, iOS, or Android app with others. Cogs of the Cognitive Processes I began to think about the triangular shape of Bloom's Taxonomy and realized I thought of it a bit differently.Since the cognitive processes are meant to be used when necessary, and any learner goes in and out of the each level as they acquire new content and turn it into knowledge, I created a different type of image that showcased my thoughts about Bloom's more meaningfully.Here is my visual which showcases the interlocking nature of the cognitive processes or, simply, the "Cogs of the Cognitive Processes". IPAD APPS TO SUPPORT BLOOM'S REVISED TAXONOMYassembled by Kathy Schrock​ Bloom's and SAMR: My thoughts

Writing Guides The following Writing Guides are available. To view guides, click on the list of catgories on the list below. You may view or hide descriptions of the guides. Writing and Speaking Research Writing & Documentation 7 Top Sites for Finding Useful iPhone and iPad Applications The iPhone and iPad are the hottest gadgets today and iPhone 4 that just was released will only make iPhone even more popular. One of the best things about the iPhone and the iPad is the huge number of applications available for them. There are literally thousands of iPhone and iPad related applications listed in the App store so how do you filter out the really good ones from the masses. One option that works is to use websites specializing in finding and reviewing great Apps. This article give you 7 Top sources to find iPhone and iPad App-inspiration. Advertisement

Eight Great Apps for Educators to Create, Display and Share Nancy White/Flickr By Kathy E. Gill, PBS MediaShift The Best Websites On The Internet The internet is a big place, with a lot of content. Over one billion websites at the time of writing. With the web constantly changing, it’s hard to keep track of which sites have the best content and resources. To help make things easier, we’ve compiled this enormous list of the best websites on the internet, split into their relevant categories. What is a Scholarly Source? When I use the term "scholarly source", I mean a source that is peer reviewed or published in a recognized scholarly source, like a journal or a university publisher. How do you tell the difference between a scholarly source and other sources? Well, the library has a chart that might help, at least in telling the difference between scholarly journals and popular magazines. Here are a few other tips:

Thesis Guide Senior Theses in Computer Science A senior thesis is more than a big project write-up. It is documentation of an attempt to contribute to the general understanding of some problem of computer science, together with exposition that sets the work in the context of what has come before and what might follow. In computer science, some theses involve building systems, some involve experiments and measurements, some are theoretical, some involve human subjects, and some do more than one of these things. Computer science is unusual among scientific disciplines in that current faculty research has many loose ends appropriate for undergraduate research. Senior thesis projects generally emerge from collaboration with faculty.

Some Of The Best Designs Of iPad Apps For Inspiration - 33 Examples An app made for iPad is an app like no other. That’s because apps for iPad are designed specifically to take advantage of all the technology built into iPad. However, not all iPad apps are to be considered well designed. Most of them have a rather simple design, making an app look similar to the next. Still, some apps have a creative approach and tend to make things differently so that they stand out and be liked not only for their functions and usability, but also for their design. 33 of these intelligently designed apps are here in this article for inspiration, to help you see how a good looking app should be, in case you’ll start designing your own app.

RFID Tags Past and Present - How RFID Works RFID technology has been around since 1970, but until recently, it has been too expensive to use on a large scale. Originally, RFID tags were used to track large items, like cows, railroad cars and airline luggage, that were shipped over long distances. These original tags, called inductively coupled RFID tags, were complex systems of metal coils, antennae and glass. 29 Incredibly Useful Websites You Wish You Knew Earlier There are so many wonderful websites around, and it is difficult to know each and every one of them. The below list provides some of those websites that I find particularly helpful, even though they are not as famous or as prevalent as some of the big names out there. 1. BugMeNot Are you bugged constantly to sign up for websites, even though you do not wish to share your email?

What Is a Scholarly Source? College professors often require students to write papers using scholarly sources. These sources are academic writings by educators and researchers who specialize in specific subject areas. The writers pepper the documents with specialized language and include graphs or charts to illustrate their findings. Scholarly sources are geared toward specialized audiences. Types of Scholarly Sources Other than professional and academic journals, scholarly sources include primary sources (statistical data and lab reports), secondary sources (literary reviews, analysis of literary, visual or performing arts and informed commentary) and tertiary sources (textbooks and reference works, such as dictionaries and encyclopedias).

AWE App @ UCL Survey of English Usage Available for: iPhone 3-6, iPod Touch, iPad and iPad mini. Also on Google Play for Android. Published by UCL Business PLC Apple >> AWE Android >> AWE >> Support >> FAQ >> Feedback >> Facebook The Top 50 Mac Apps (What’s New To You?) If you own a Mac, you love it. That’s just how it works. While it’s awesome right out of the box, you can add a lot to your Mac experience with some fun, creative, productivity-enhancing and unique apps like those I’ve listed here. If you’re like me, you get a lot of apps for your iPhone or iPad, but not so many for your Mac. I don’t know why it is… probably because my phone is just with me more (though most of my work still gets done on the Mac). So if you haven’t checked out the Mac app store since the last OS update was released, do yourself and favor and see what you find here.

Enhanced Biofeedback with Virtual Reality - The MotionMonitor® Conduct motor-control and stimulus response studies with audio and visual cues using either a 2-D display or 3-D immersive stereoscopic display.Generate discrete or randomized targets.Provide visual and audio "pacing" signals for timed exercises.Encourage extended range of motion with "success" tones when target values are achieved.Monitor timing and existence of muscle recruitment with EMG feedback.Optimize balance strategies by tracking body segment center of mass and forceplate center of pressure.Record and save all data collected during the biofeedback trial.Display data selected from intuitive drop-down menus or defined by the user with standard math notation. Export all raw or processed data for further processing in other software. The image to the left dispicts a 2-D biofeedback balance exercise with the subject encouraged to extend his limit of stability. The image depicts a portion of the biofeedback dialog used to setup an experiment. Return to the Applications List >>>

8 Free Mind Map Tools & How to Best Use Them Advertisement Here’s the good news. Finally, we can be like Leonardo da Vinci’s in one small way. No, we are not getting his polymathic superpowers. His penchant for taking free-flowing notes that filled notebooks with diagrams and scribblings is more achievable. Maybe, he knew that the human brain likes visuals more than words.

Fantastic! I have iPads in my classroom and I'm always looking for ways to use blooms in my classroom. I've yet to sift through all the apps but happy so far. I'm new to pearltrees but gradually getting the idea by ladyvaries Jun 9