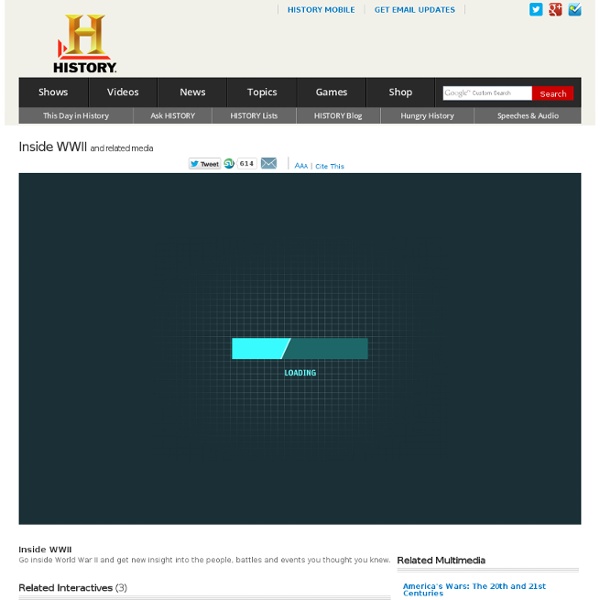 A More Perfect Union | Watch | Constitution USA One of the most revolutionary aspects of the Constitution is “federalism,” the innovative system which created a strong national government while at the same time preserving much of the independence of the states. This delicate balance of power, seemingly hard-wired for disagreement and conflict, has served America well for more than two centuries. But it has also led to tensions throughout American history and still sparks controversy today. Peter Sagal travels across the country and meets many who believe that the federal government has grown too big, and assumed more power than the framers intended. On the flip side, Peter will meet passionate advocates who point to the central contributions that can only be made from a strong central government, like the construction of dams and interstate highways, protection of food and drugs, and maintaining clean water and air.

Nonsense Thoughts Teaching History With Film: 'Lincoln', 'Argo' and 'Zero Dark Thirty' DreamWorks Pictures and 20th Century FoxDaniel Day-Lewis in Steven Spielberg’s film “Lincoln.” Three of this year’s Oscar contenders — “Lincoln,” “Argo” and “Zero Dark Thirty” — invite viewers to look at history, either through the lens of the distant past (as in the case of “Lincoln”) or through recent events (like “Zero Dark Thirty”), and to question the degree of truth and fiction at work in the retelling of these events. These same three movies have also prompted some serious debate and reflection on American politics, and the direction the nation should be headed. Below, we offer ways you can approach each film in the classroom, with critical thinking questions and related Times resources. While they are intended as jumping-off points for further discussion and reflection, you can also have students address these themes by writing their own movie reviews or scene analyses. Ways to Approach: • Explore the cult of personality. • Investigate “Lincoln” and the 13th Amendment. 1. 2. 3.

6 Insane Coincidences You Won't Believe Actually Happened America's Freak Luck During the Battle of Midway The Battle of Midway may be remembered as one of the most spectacular naval battles in history and one of the huge turning points in the Pacific theater, but it started out as a pure clusterfuck for the Americans. Despite going into battle with most of Japan's game plan in their pocket thanks to American codebreakers/Bothan spies, the U.S. Navy had little to show for it in the early hours of June 4, 1942. Just about every aircraft that took on the Japanese that day was destroyed, and all without delivering any serious damage. In short, the Battle of Midway started off like the Battle of Endor, only with every fighter in the Rebel Fleet crashing into the Death Star's deflector shield. Where it Gets Weird: There was one squadron of American dive bombers lead by Lieutenant Commander C. His squadron started dropping like flies until, in an act of sheer luck that would make even J.K. Where it Gets Even Weirder: ...when he wasn't busy being a pimp.

explodingdog 2012 Digital History Completed just three weeks after British sentries killed five colonists and wounded six others, Paul Revere's engraving shaped the popular image of the Boston Massacre. Unhappy BOSTON! see thy Sons deplore, Thy hallowe'd Walks besmear'd with guiltless Gore: While faithless --- and his savage Bands, With murd'rous Rancour stretch their bloody Hands; Like fierce Barbarians grinning o'er their Prey, Approve the Carnage, and enjoy the Day. If scalding drops from Rage from Anguish Wrung If speechless Sorrows lab' ring for a Tongue, Or if a weeping World can ought appease The plaintive Ghosts of Victims such as these; The Patriot's copious Tears for each are shed, A glorious Tribute which embalms the Dead.