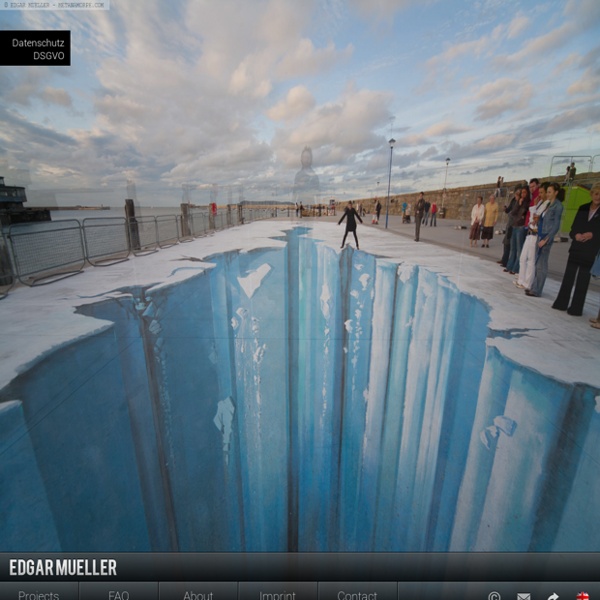 www.julianbeever.net Born Cheltenham, UK 1959.Grew up in Melton Mowbray from the age of two.Attended state schools and studied Art at Leeds Met. University in UK.1979-83.Julian Beever is a British artist who began pavement art as a busker, drawing in different countries including the USA, Australia and Europe to fund his travels .Began anamorphic pavement illusions in early 90’s. Commercial commissions from mid 2000’s.Has also worked in a range of different jobs including photographer’s assistant, tree-planter, carpet-fitter, Art teacher, English teacher (TEFL), street entertainer and Punch and Judy Man.Made 10 part TV series « Concrete Canvas » (with ElectricSky Productions) in 2007.Wrote book « Pavement Chalk Artist », now in third edition (published by Firefly), featuring his pavement art in 2011 . His earlier drawings were portraits of well known people which worked best in getting immediate attention from passers-by. He still finds time to do drawings for his own satisfaction and for their own sakes.

Acrylic pixels by Anthony Michaels Just found on Flickr (thanks to Simmi) and can’t find much info about him, sorry. I really enjoy his colorful pixel retro style acrylic paintings, bringing strong messages put down like old Nintendo videogames covers. Julian Beever's pavement drawings [Homepage] [Wall murals] [Fine Art paintings] [E-mail] J ulian Beever has made pavement drawings for over twenty years. He has worked all over the world. T o buy a book on the pavement art of Julian Beever (Publishers website) :

Bastardilla New Mural In Valencia, Spain StreetArtNews Colombian artist Bastardilla has made her welcome return to Europe and she starts with Valencia for the Poliniza 2012 Urban Art Festival It's been over six months since we last saw some of Bastardilla's work on the streets of London (covered). She just completed this superb mural which can be seen inside the Polytechnic University of Valencia and she will now be traveling around Europe to "paint a lot", so check back with us soon fore more... Phibs Phibs @ Stanmore – Ozanam Project Huge project @ Stanmore – more pics yet to come! Linz & Beastman

MONEYLESS X 2501 X TELLAS X GAIA X OZMO X MARTINA MERLINI X ANDRECO, OSTIENSE RAILWAY BRIDGE DREAM TEAM FOR 999CONTEMPORARY ROME – DOZE — perpetually pushing forward Here’s an exclusive video of 999 Contemporary’s latest collaborative street art project in Rome, Italy. Words by Crist Espiritu. Photos and Project by 999Contemporary. Video by Giacomo Daverio. The project features several contemporary artists who have created impacts on the art scene with their distinctive painting styles both in the streets and in galleries. LDN. London Street Art, documented. There are many forms of diverse Street Art around London. Here is a small selection of some exemplary work found around the capital. Street Artists A-Z LDNGraffiti has had an overhaul and painstakingly searched the database to create a set of 'A-Z' listings of Street Artists found in and around London... Banksy vs Team Robbo - Updated: 23/02/2014 On 19/12/2009 Street Artist Banksy adapted a piece of graffiti painted in 1985 by London Graffiti Pioneer Robbo.

Street Artist interview: C215. By Street Art London C215′s street art represents an exploration of animals, architecture, freedom and those forgotten about by society all in incredible detail and against a backdrop of overlooked places. C215′s real name is Christian Guémy but he goes by his artistic identity, ‘C215′. He has put work up all over the world in India, Israel, Poland, the USA, Senegal, Russia, Morocco, his home-country of France and of course, London. 10 Fascinating Art Installations Banksy’s Telephone Booth To parody the decline of the famous London Telephone Booths, infamous British guerilla artist Banksy puts an axe through this one. Reymond's Real Life Transformer One of the most famous works of french artist Guillaume Reymond, this series of performances, "TRANSFORMERS", brings together different types of vehicles, gathering them according to a precise choreography, and creating what looks from the sky like gigantic robots.

Exclusive Interview with C215 - The Shooting Gallery - The Shooting Gallery In honor of his first solo show, ‘Smoke Gets in Your Eyes,’ at the Shooting Gallery, French stencil artist C215 answered a few questions for us, providing thorough answers that not only give insight into his artistic intentions but into his personal character as well. Between studying “catholic theory of Architecture and Painting in XVIIth century, the history of Romanticism in Germany and the birth of Abstract in painting,” being a devout father to an 8 year old daughter and traveling around the world as a practicing and passionate artist it’s incredible to see that C215 still found time to create such a thoughtful solo show. Come see ‘Smoke Gets in Your Eyes,’ opening tomorrow from 7-11pm. Murals Archives December 5, 2011 (Photo by Lucky Cat) Posted by marc at 7:17 AM in Murals |