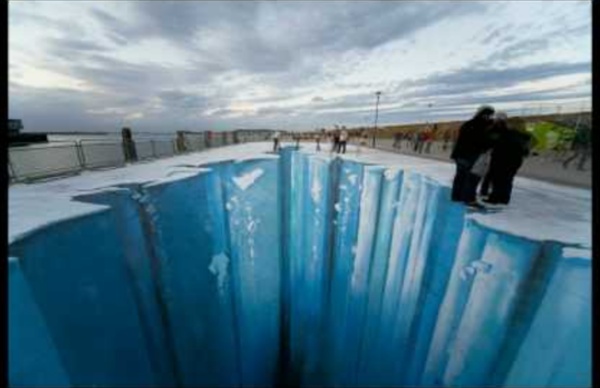 trash lovers Edgar Müller Shark street art created by Edgar Müller in Hong Kong Edgar Müller (born 1968, Mülheim, Ruhr, Germany, often transliterated Mueller) is considered by at least one author to be "one of the world's top 3-D illusionist street painters",[1][dead link] "one of the best known street painters in the world thanks to his YouTube videos",[2] and has been featured as "Maestro Madonnaro" at the Sarasota Chalk Festival.[3] At the Avenida de Colores, Inc. Müller created a 100' x 40' 3-D street painting that is the first known contemporary street painting that metamorphosed from one image to another with the change from day to night because the painter used photoluminescent paints. At the Sarasota Chalk Festival, the featured artist, Vera Bugatti, and Müller, created a 3-D street painting that made history as well. Guinness Records[edit] Largest pavement art[4]Largest anamorphic pavement art[4] See also[edit] Kurt Wenner Sources[edit] Jump up ^ Sarasota Chalk Festival (October 12, 2010). External links[edit]

Street Artist interview: C215. By Street Art London C215′s street art represents an exploration of animals, architecture, freedom and those forgotten about by society all in incredible detail and against a backdrop of overlooked places. C215′s real name is Christian Guémy but he goes by his artistic identity, ‘C215′. He has put work up all over the world in India, Israel, Poland, the USA, Senegal, Russia, Morocco, his home-country of France and of course, London. C215 talks with Street Art London about the subjects and themes that have inspired him to become a full time artist. The “C” in C215 stands for your real name – Christian – but your artistic identity also has another significance. This nickname was the number of a room where I decided approximately what my life has been since then. You first painted the street with a spray bomb over 20 years ago. My first stencil was from 2006. You’ve painted in countries all over the world? Not all over the world, but in a lot of different places. Freedom is in the abstract part of my work.