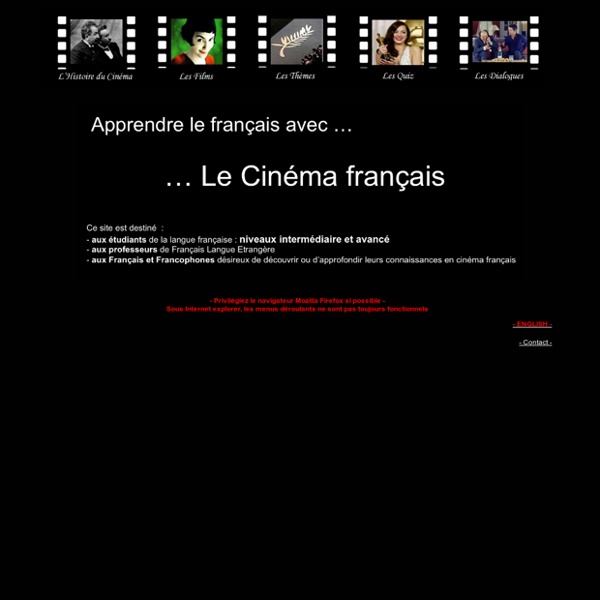 Teaching Foreign Languages K-12: A Library of Classroom Practices 1. Introduction to the Library This program provides an overview of the entire library, with suggestions for use in professional development settings. Go to this unit. 2. 31 French movies to watch. (March Edition) + Where to watch these movies online Reading time: 10 minutes Ready for another helping of French movies? For March, I have prepared a special menu for all fans of French cinéma. Juicy films dished out by cream of the crop directors. Just the right pinch of action, thriller, hot-blooded drama and a huge slice of eye-catching cinematography. You can watch these movies one per day for each day of the month, or you can be a total movie glutton and devour them all in one go.

- StumbleUpon Who came up with the idea that we are supposed to drink orange juice at breakfast? And why, if oatmeal is so good for us, do we eat that only in the morning as well? Apologies to the Palinites, but nutritionists are starting to realize that you and I like our oatmeal and OJ before we start the day because we evolved to like it that way—because enjoying the two together is healthier than eating each of them alone. Watch Taxi 2 Full Movie Online Free Download in HD Server Episode 1 The 13 Best Youtube Channels to Learn French According to a study by PhD graduate Paul Sulzberger from Victoria University, listening to a language is one of the most efficient ways to learn it. To do that, you could listen to a podcast, watch French TV or watch French movies. Or you could go to Youtube and learn French with one of the Youtube channels I selected for you. Whether you’re a beginner, intermediate or advanced French learners, there is a Youtube channel for you here! The Best Youtube Channels for beginner French learners Learning French with videos can be extremely rewarding and fun, but you need to make sure you don’t end up watching videos that are 90% in English.

The top 50 Greatest Films of All Time from our September 2012 issue Introduction Ian Christie rings in the changes in our biggest-ever poll. And the loser is – Citizen Kane. After 50 years at the top of the Sight & Sound poll, Orson Welles’s debut film has been convincingly ousted by Alfred Hitchcock’s 45th feature Vertigo – and by a whopping 34 votes, compared with the mere five that separated them a decade ago. So what does it mean? 20 Must-Watch Artist Documentaries, From Basquiat to Bas Jan Ader With Sundance just passed, Oscars on the horizon, and a cold New York winter keeping us indoors, ARTINFO HQ has been abuzz with movie talk lately. As is to be expected, there have been more than a few conversations about our favorite art films and documentaries. From our many debates about the best, we've distilled this list of indispensible docs for art lovers. Crumb (1994)

The Best French Movies to Improve Your Understanding Watching movies in their original format (without dubbing) has proven to be a remarkably fun and effective way to improve your foreign language skills. We’ve written before on the best movies to watch for learning Spanish. So many people requested a similar list for French that we decided to come up with our top 5 movies that will help you learn. Remember that, in principle, the most effective way is to:

The Story of Film: An Odyssey The series was broadcast in September 2011 on More4, the digital television service of UK broadcaster Channel 4. The Story of Film was also featured in its entirety at the 2011 Toronto International Film Festival,[2] and it was exhibited at the Museum of Modern Art in New York City in February 2012.[1] It was broadcast in the United States on Turner Classic Movies beginning in September 2013.[3] List of episodes[edit] Each episode lists the film clips that are featured.[1][2][7][8]

Human Brain The brain is the most complex organ in the human body made up of over 100 billion nerve cells. It controls the central and peripheral nervous systems and regulates most human activity. This collection looks at the structure and function of the brain and covers a number of the diseases to which it is susceptible.

The best resources and tools to Learn French On this page, you’ll find our list of online resources for learning French. The different sites are broken down into categories for easier browsing. Simply click on one of the main links (like “podcasts”) to view numerous resources. Happy Learning! General Learning (online courses, general sites, blogs…)^ Français Authentique (literally “Authentic French”) is a very popular website for French learners where you can find many resources (videos, podcasts, lessons…) to learn and improve your French skills.