25 maps that explain the English language 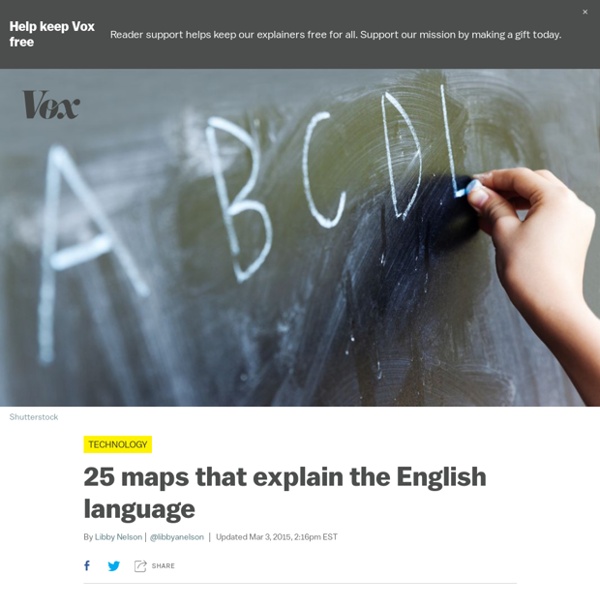 English is the language of Shakespeare and the language of Chaucer. It’s spoken in dozens of countries around the world, from the United States to a tiny island named Tristan da Cunha. It reflects the influences of centuries of international exchange, including conquest and colonization, from the Vikings through the 21st century. Here are 25 maps and charts that explain how English got started and evolved into the differently accented languages spoken today. The origins of English 1) Where English comes from English, like more than 400 other languages, is part of the Indo-European language family, sharing common roots not just with German and French but with Russian, Hindi, Punjabi, and Persian. 2) Where Indo-European languages are spoken in Europe today Saying that English is Indo-European, though, doesn’t really narrow it down much. 3) The Anglo-Saxon migration 4) The Danelaw The next source of English was Old Norse. 5)The Norman Conquest 6) The Great Vowel Shift The spread of English Credits

Norway considers giving mountain to Finland as 100th birthday present What do you give a country that has 188,000 lakes for a birthday present? Its highest mountain back, obviously. Norway’s government has confirmed that for the centenary of Finland’s independence next year it is considering moving the border, gifting its Nordic neighbour a mountain peak that would be the country’s highest point.

The Trump Resistance Plan: A Timeline – Russia and President Trump Of the Jan. 6, 2017, meeting, when Comey told Trump about the infamous Steele dossier, Trump said: “He shared it so that I would think he had it out there” as leverage against Trump. Of the Feb. 14, 2017, meeting, when Trump said he hoped Comey could see his way to “letting Flynn go,” Trump said: “He said I said ‘hope’ — ‘I hope you can treat Flynn good’ or something like that. I didn’t say anything. But even if he did — like I said at the news conference on the, you know, Rose Garden — even if I did, that’s not — other people go a step further. These Ancient Trees Have Stories to Tell Over three trillion trees live on planet Earth, and yet we know so few of their stories. Of course all trees play an important role—purifying the air, hosting the feathered and the furry, teaching kids (and kids at heart) how to climb—but some have spent more time doing these things than others. Quiver trees, for example, can live up to 300 years, oaks can live a thousand years, and bristlecone pines and yews can survive for millennia. In 1999, photographer Beth Moon took it upon herself to begin documenting some of these more seasoned trees.

9 of the Strangest and Loveliest Dioramas Ever While there are endless different kinds of dioramas, there is something that most all of them have in common: the strange beauty that comes from capturing our world in miniature, in exacting detail. Some of the most impressive examples of this craft are on display in museums around the globe, while others a bit more off the beaten path. From bizarre to beautiful, here are nine places to see these intricate three-dimensional snapshots of the world. Fisher Museum Forestry Dioramas The Center for Fiction About Our First Novel Prize The Center for Fiction's First Novel Prize is awarded to the best debut novel published between January 1 and December 31 of the award year. The author of the winning book is awarded $10,000 and each shortlisted author recieves $1,000. The winner will be announced at our Annual Benefit and Awards Dinner on Tuesday, December 6 at The Metropolitan Club. This year's judges are: Viet Thanh Nguyen, Chris Abani, Kate Christensen, Rivka Galchen, and Kate Walbert.

42 maps that explain World War II by Timothy B. Lee on November 13, 2014 World War II was a great tragedy, claiming 60 million lives and throwing millions more into turmoil. Yet the war also spurred rapid technological development, hastened the end of colonialism, and laid the foundation for institutions like the United Nations and the European Union. Here are 42 maps that explain the conflict — how it started, why the Allies won, and how it has shaped the modern world.