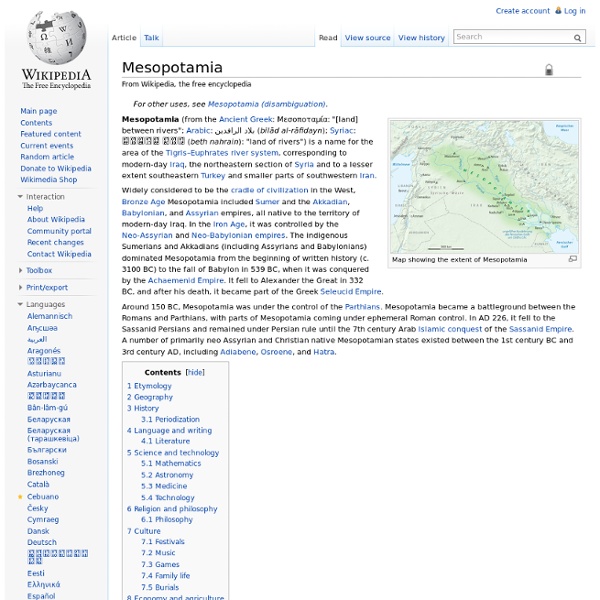 Map showing the extent of Mesopotamia Mesopotamia (from the Ancient Greek: Μεσοποταμία: "[land] between rivers"; Arabic: بلاد الرافدين‎ (bilād al-rāfidayn); Syriac: ܒܝܬ ܢܗܪܝܢ (Beth Nahrain): "land of rivers") is a name for the area of the Tigris–Euphrates river system, corresponding to modern-day Iraq, Kuwait, the northeastern section of Syria and to a much lesser extent southeastern Turkey and smaller parts of southwestern Iran. Widely considered to be the cradle of civilization in the West, Bronze Age Mesopotamia included Sumer and the Akkadian, Babylonian, and Assyrian empires, all native to the territory of modern-day Iraq. In the Iron Age, it was controlled by the Neo-Assyrian and Neo-Babylonian empires. The indigenous Sumerians and Akkadians (including Assyrians and Babylonians) dominated Mesopotamia from the beginning of written history (c. 3100 BC) to the fall of Babylon in 539 BC, when it was conquered by the Achaemenid Empire. Etymology Geography History Periodization Literature

Levant The term entered English in the late 15th century from French.[3] It derives from the Italian Levante, meaning "rising", implying the rising of the sun in the east.[2][4] As such, it is broadly equivalent to the term Al-Mashriq (Arabic: اَلْـمَـشْـرِق‎, [ʔalmaʃriq])[5], meaning "the land where the sun rises". The Levant has been described as the "crossroads of western Asia, the eastern Mediterranean, and northeast Africa",[19] and the "northwest of the Arabian plate".[20] The populations of the Levant[21][22] share not only the geographic position, but cuisine, some customs, and a very long history. They are often referred to as Levantines.[23] Etymology The notion of the Levant has undergone a dynamic process of historical evolution in usage, meaning, and understanding. While the term "Levantine" originally referred to the European residents of the eastern Mediterranean region, it later came to refer to regional "native" and "minority" groups.[27]

Middle East The Middle East[note 1] (also called the Mid East) is a eurocentric description of a transcontinental region centered on Western Asia and Egypt. The corresponding adjective is Middle-Eastern and the derived noun is Middle-Easterner. Formerly, the eurocentric synonym Near East (as opposed to Far East) was commonly used. Arabs, Azeris, Kurds, Persians, and Turks constitute the largest ethnic groups in the region by population,[1] while Armenians, Assyrians, Circassians, Copts, Druze, Jews, Maronites, Somalis, and other denominations form significant minorities.

In the US, white supremacists have infiltrated police and military to get weapons training “Many people from my crew went on to be Chicago police officers, they went on to be prison guards,and they certainly took their ideology with them. A lot of people that I know ended up enlisting in the military to recruit [racists] and to get weapons and combat training.” Picciolini says he “frequently” gets requests for help from people in the military - or parents or friends - concerned by rhetoric within the ranks. “They are denying the Holocaust, their views are in line with white supremacists and white nationalists, and they are coming back from serving in the military angry,” he says. Picciolini’s experience is echoed by a 2015 FBI Counterterrorism Policy Guide that highlights its investigations into domestic terrorism. The FBI identified active links to officers who were employed by some of the 18,000 law enforcement agencies across the United States.

Euphrates River in Asia The Euphrates (; Sumerian: 𒌓𒄒𒉣 Buranuna; Akkadian: 𒌓𒄒𒉣 Purattu; Arabic: الفرات‎, romanized: al-Furāt; Syriac: ̇ܦܪܬ‎ Pǝrāt; Armenian: Եփրատ: Yeprat; Hebrew: פרת‎ Perat; Turkish: Fırat; Kurdish: Firat‎) is the longest and one of the most historically important rivers of Western Asia. Together with the Tigris, it is one of the two defining rivers of Mesopotamia (the "Land between the Rivers"). Originating in the Armenian Highlands (eastern Turkey), the Euphrates flows through Syria and Iraq to join the Tigris in the Shatt al-Arab, which empties into the Persian Gulf.

Anatolia Anatolia (from Greek: Ἀνατολή, Anatolḗ, "east" or "[sun]rise"; Turkish: Anadolu), also known as Asia Minor (Medieval and Modern Greek: Μικρά Ἀσία, Mikrá Asía, "small Asia"; Turkish: Küçük Asya), Asian Turkey, the Anatolian peninsula or the Anatolian plateau, is a large peninsula in West Asia and the westernmost protrusion of the Asian continent. It makes up the majority of modern-day Turkey. The region is bounded by the Black Sea to the north, the Mediterranean Sea to the south, the Armenian Highlands to the east and the Aegean Sea to the west. The Sea of Marmara forms a connection between the Black and Aegean seas through the Bosphorus and Dardanelles straits and separates Anatolia from Thrace on the Balkan peninsula of Europe. The eastern border of Anatolia is traditionally held to be a line between the Gulf of Alexandretta and the Black Sea, bounded by the Armenian Highland to the east and Mesopotamia to the southeast.

Western Asia Western Asia, West Asia, Southwestern Asia or Southwest Asia is the westernmost subregion of Asia. The concept is in limited use, as it significantly overlaps with the Middle East (or the Near East), the main difference usually being the exclusion of the majority of Egypt (which would be counted as part of North Africa) and the inclusion of the Caucasus. The term is sometimes used for the purposes of grouping countries in statistics. The total population of Western Asia is an estimated 300 million as of 2015. MI6 boss Sir John Scarlett still signs letters in green ink Sir John said that he keeps a special coloured pen in his desk for official correspondence and to inspire junior agents with the history of the service. MI6 bosses have been known colloquially as the "green ink brigade" since the days of Sir George Mansfield Smith-Cumming, the former Royal Navy officer who established the Secret Intelligence Service (SIS), also known as MI6, to gather intelligence on the Germans before the First World War. A man who revelled in the secrecy and glamour of espionage, Sir George signed all his correspondence with his final initial in green pen – the writing implement of choice for conspiracy theorists and cranks.

Akkadian Empire Historical state in Mesopotamia Coordinates: 33°6′N 44°6′E / 33.100°N 44.100°E / 33.100; 44.100 During the 3rd millennium BC, there developed a very intimate cultural symbiosis between the Sumerians and the Akkadians, which included widespread bilingualism.[5] Akkadian, an East Semitic language,[6] gradually replaced Sumerian as a spoken language somewhere between the 3rd and the 2nd millennia BC (the exact dating being a matter of debate).[7] Iran Country in the Middle East Coordinates: 32°N 53°E / 32°N 53°E / 32; 53 Iran (Persian: ایران‎ Irān [ʔiːˈɾɒːn] ( listen)), also called Persia,[10] and officially the Islamic Republic of Iran (Persian: جمهوری اسلامی ایران‎ Jomhuri-ye Eslāmi-ye Irān ( listen) [dʒomhuːˌɾije eslɒːˌmije ʔiːˈɾɒn]), is a country in Western Asia.[11][12] It is bordered to the northwest by Armenia and Azerbaijan,[a] to the north by the Caspian Sea, to the northeast by Turkmenistan, to the east by Afghanistan, to the southeast by Pakistan, to the south by the Persian Gulf and the Gulf of Oman, and to the west by Turkey and Iraq. Iran is home to one of the world's oldest civilizations,[16][17] beginning with the formation of the Elamite kingdoms in the fourth millennium BC.