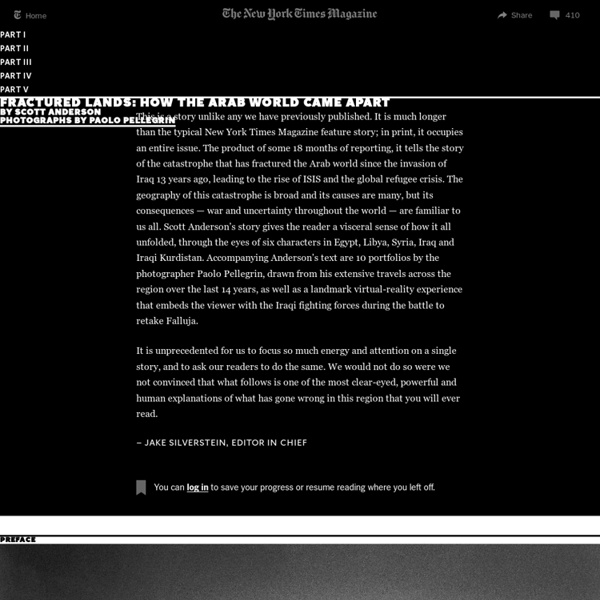 This is a story unlike any we have previously published. It is much longer than the typical New York Times Magazine feature story; in print, it occupies an entire issue. The product of some 18 months of reporting, it tells the story of the catastrophe that has fractured the Arab world since the invasion of Iraq 13 years ago, leading to the rise of ISIS and the global refugee crisis. The geography of this catastrophe is broad and its causes are many, but its consequences — war and uncertainty throughout the world — are familiar to us all. Scott Anderson’s story gives the reader a visceral sense of how it all unfolded, through the eyes of six characters in Egypt, Libya, Syria, Iraq and Iraqi Kurdistan. It is unprecedented for us to focus so much energy and attention on a single story, and to ask our readers to do the same. We’re saving your reading progress so you can pick up where you left off later. You can log in to save your progress or resume reading where you left off. Preface

Middle East: Is secularism the answer? - Burhanettin Duran The world's eyes are fixed on daily updates from the battlefields in Syria and Iraq. Clashes between the Free Syrian Army (FSA), currently advancing toward al-Bab and the People's Protection Units (YPG), the defeat of Daesh in Bashiqa, the prospect of creating a buffer zone in Northern Iraq and the PKK's growing presence in Sinjar and Kirkuk are among the many developments that consume everyone's time. Meanwhile, all stakeholders are asking the same question: What lies ahead for the Middle East? The current situation is not exactly great: The nation-state system, which was imposed by Westerners, is going down. Against the backdrop of two civil wars, proxy wars, sectarian clashes and religious and secular extremism, unpopular governments and their discriminatory policies are pitted against the greed of local players.

Why I Hate Female Sommeliers and So Should You You would be forgiven for thinking that we are living in a marvelous time for women in the wine industry. With headlines like “The Rise of the Female Sommeliers” and “Sex and the Sommelier: Make Way for Women,” women are showing up everywhere. From “13 Badass Female Winemakers” to “New York City’s Pioneering Female Sommeliers,” women seem to be making big strides in wine making and tasting. As a female wine writer, I should be delighted by this celebration of “female” sommeliers and winemakers. Surely this explosion of coverage of women in wine is cause for excitement. But I’m not excited. Donald Trump’s swamp of war: What does he know that career military officers don’t? President-elect Donald Trump’s message for the nation’s senior military leadership is ambiguously unambiguous. Here is he on “60 Minutes” just days after winning the election. Trump: “We have some great generals. We have great generals.”

How likely is secular democracy in the Middle East? - SEMİH İDİZ Ambassador Feridun Sinirlioğlu, a former Undersecretary at the Foreign Ministry who is Turkey’s new “point man” at the U.N., believes the Middle East has to move toward a secular and democratic future. “We also see that this multicultural region needs a secular and democratic future on the basis of freedom of religion and belief,” Sinirlioğlu said in an interview with Hürriyet’s Cansu Çamlıbel, just prior to flying off to New York to assume his post as Turkey’s Permanent Representative to the U.N. “The Arab Spring, which started in 2011, also began with the same demand. People were demanding democracy. Democracy and secularism were both on the agenda,” he added.

James Mattis Quotes - The Monks of War, a James Mattis Biography This article originally appeared in the March 2006 issue. Of all the lessons he's learned in this war, the most important one to Marine Lieutenant General James Mattis is this: Winning this war is mostly about not losing friends along the way. In the run-up to the invasion of Afghanistan in the fall of 2001, General Mattis was charged with setting up an air base in Pakistan to make the movement of marines into the theater possible. To clear the way for the airstrip, he flew to Islamabad and sat down with the Pakistani joint headquarters staff, a meeting that was mostly taken up with a litany of offenses the Americans had committed against the Pakistanis.

How Syria's War Threatened the Middle East's Food Future TERBOL, Lebanon—Just across the mountains from this quiet valley of green fields, cypress trees, low-slung apartment buildings, and minarets towering over domed mosques, a war is going on. Since 2011, Syrian government forces have mercilessly attacked civilians, rebel forces, and the Islamic State with barrel bombs dropped from helicopters onto urban neighborhoods, artillery shells fired on schools and hospitals, and chemical weapons. An estimated 400,000 have died, and at least 11.4 million have fled their homes. Some of Syria's refugees are here in the Bekaa Valley, five miles from the border. They live in tents covered with white and blue plastic sheeting that rattles in the wind.

How Journalists Covered the Rise of Mussolini and Hitler How to cover the rise of a political leader who’s left a paper trail of anti-constitutionalism, racism and the encouragement of violence? Does the press take the position that its subject acts outside the norms of society? Or does it take the position that someone who wins a fair election is by definition “normal,” because his leadership reflects the will of the people? After Daesh: The Future of the Middle East Loud & Clear Get short URL As the battle for Mosul continues, U.S. Trump, the Dragon, and the Minotaur by Yanis Varoufakis ATHENS – If Donald Trump understands anything, it is the value of bankruptcy and financial recycling. He knows all about success via strategic defaults, followed by massive debt write-offs and the creation of assets from liabilities. But does he grasp the profound difference between a developer’s debt and the debt of a large economy? And does he understand that China’s private debt bubble is a powder keg under the global economy?

The Neural Correlates of Religious and Nonreligious Belief Abstract Background While religious faith remains one of the most significant features of human life, little is known about its relationship to ordinary belief at the level of the brain. Log In The middle section is a 200-page presentation of the various kinds of neurobiological work now being done on the age-old mind-body problem. It is this part of the book — the one that concentrates on the astonishing efforts being made to understand the mind as distinct from the brain — that most seriously commanded my attention. What clearly intrigues Hustvedt, the inspired student of science, is the exciting uncertainty that underpins this work. Here, she “trumpets doubt and ambiguity, not because we are incapable of knowing things,” but because “doubt is fertile.” In service to this thesis Hustvedt gives us an encyclopedic tour of the investigative research being done by the neurobiologists who spend their lives addressing subjects that fit under such headings as “Brains: Hard or Soft?”; “Nature/Nurture: Minds and Pop Culture”; “Heritability and Twin Tales”; “Machines, Emotions and Bodies.”

Egypt’s Failed Revolution The Egyptian President, Abdel Fattah El-Sisi, who came to power in a coup that, in its aftermath, resulted in the massacre of more than a thousand supporters of his predecessor, has a reputation for speaking very softly. This quality often disarms foreigners. “When you talk to him, unlike most generals, he listens,” a European diplomat told me recently. “He’s not bombastic.” An American official told me that Sisi reminds her of a certain Washington archetype.

“Not Sending Their Best”: World Map of IQ Drop Due to Immigration Well, apart from the Gulf states – thanks in large part to coming from such a low base that even subcontinental coolies are an improvement over the natives. Otherwise, the cognitive impact of immigration – at least as proxied by the differences in performance on the PISA tests between the national average, which includes immigrant children, versus only native children – is almost entirely negative for its supposed beneficiaries across the entire world. Even those few countries with expressly “cognitively elitist” immigration policies see only the most modest of benefits: Singapore: +0.7; Canada: -0.1; Australia: -0.2.

The Vampire Squid Occupies Trump's White House - Rolling Stone Back on February 19th, during a primary-season speech in Myrtle Beach, South Carolina, Donald Trump directed a two-pronged rhetorical offensive against opponents in both parties. He started with Ted Cruz. Cruz's campaign, Trump pointed out, had taken loans from the infamous investment bank Goldman Sachs. And he'd failed to properly disclose one of these loans.