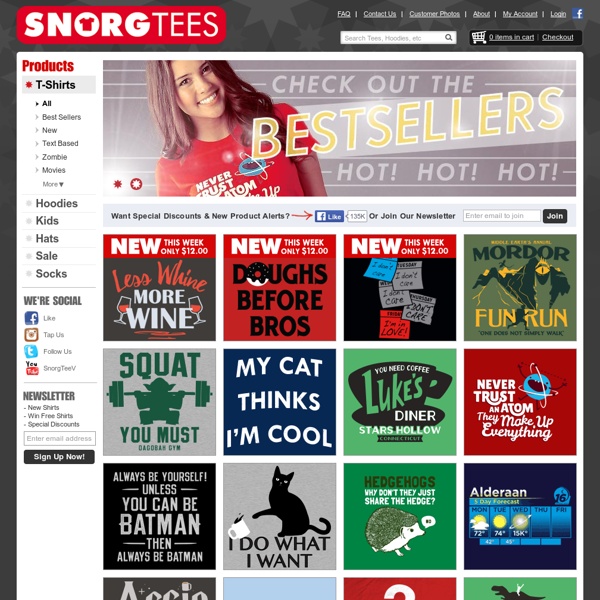 List of fictional elements, materials, isotopes and atomic particles This list contains chemical elements, materials, isotopes or (sub)atomic particles that exist primarily in works of fiction (usually fantasy or science fiction). No actual periodic elements end in "-ite", though many minerals have names with this suffix. Some of the materials listed as elements below may indeed be minerals, alloys, or other such combinations, but fictional works are often vague on such distinctions. Fictional elements and materials[edit]

Humorous, Graphic, Hilarious, Offensive, Cheap, TShirts Looking for novelty, crazy and funny t-shirts? Rip off that old one and get into something new. Select from over 12 color choices, 10 different styles, and sizes up to 10XL! We also carry women and kids sizes. Place your design on the front or back, whichever you prefer! occult/discordia/text/what.is.fnord Fnord? Fnord is evaporated herbal tea without the herbs. Fnord is that funny feeling you get when you reach for the Snickers bar and come back holding a slurpee. Fnord is the 43 1/3rd state, next to Wyoming. Fnord is this really, really tall mountain. Fnord is the reason boxes of condoms carry twelve instead of ten. Guardian Druid Tank Macros and Addons (WoW MoP 5.0.5 General Information Macros and addons are an integral part of a raider's arsenal as they can make it easier to perform a variety of tasks, improving your overall game experience. On this page, we present macros and addons that can be useful to a Guardian Druid in World of Warcraft MoP 5.4. The other pages of our Guardian Druid guide can be accessed from the table of contents on the right. About Our Reviewer This guide has been reviewed and approved by Arielle, (@ArielleEJ), a prominent Guardian Druid theorycrafter and the main author of The Inconspicuous Bear (a very respected Guardian Druid resource).

"Beatles feat. Dr.Who - Mash Up (Original Version)" T-Shirts & Hoodies by soulthrow About the artwork: Four mysterious male figures are singing this famous song “When I Get Home” while they are traversing a zebra crossing… Rumours has it that … THEY ARE ALIENS …. they came to planet earth with one mission…SAVE THE GUITAR FROM EXTINCTION! Keep Calm and Rock On! (On Tardis Door) Thanks to Alien-bugs (many call them the Beatles) rock music and the sound of guitar are still alive in our shi**y techno-dubstep days. p.s You can also see Harry Potter training on his broomstick for the Quidditch tourney 2012 Minimal Version @ More Dr.Who Designs by SOULTHROW (Click on the banners)

How to Make Cinemagraphs — Still Photos that Move Like Movies! Yup, that picture moves. Nope, you’re not going crazy! ‘Cause who said photos can only feature “still” life? Inspired by the moving pictures created by photographer and motion designer duo Jamie Beck and Kevin Burg, we set out to make the magic happen. Make your pictures move like ours did with a some Photoshop magic! Make DIY Moving Photos! More than 100 Doctor Who T-shirts Hide Your Arms has gained something of a reputation for creating epic t-shirt lists and obsessing over films and TV shows to find t-shirts. When it was first suggested to me that I write a list of Doctor Who t-shirts (if you have an idea for a list send it in) I thought that it might be a tough ask since I don’t watch the show. I don’t have anything against it, I just already spend too much time watching TV shows, though since practically everyone says it’s good I probable should give it a go.