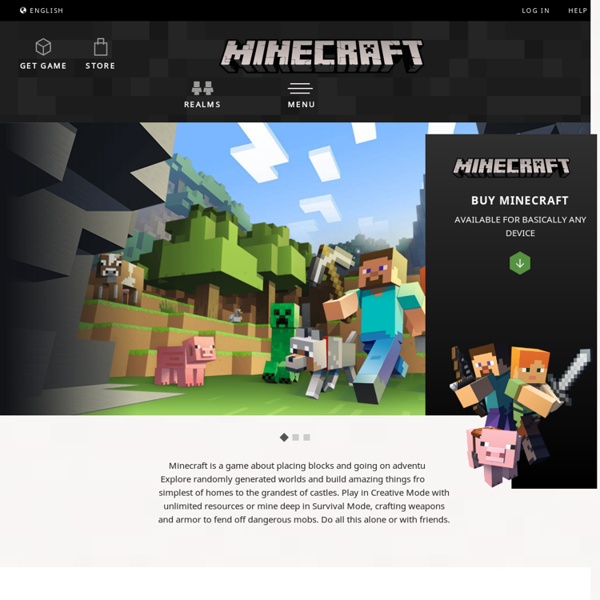 Games Like Minecraft Tap here for our Free App! Get all our media picks, personalized for your kids. No thanks Jump to navigation "Best of" Lists "Best of" lists Pid - Official website Pid is our 'nod' to old platforming adventure games and its action packed challenges and mindtwisting puzzles ultimately test the players creative ability and platforming skills. You play as a school boy stranded on a bizarre planet where he uncovers a huge conspiracy that keeps the planet mesmerized and prevents him from ever reaching home. You can purchase Pid by clicking below, or pick it up on either Xbox-live, Playstation Network or Steam. Buy game (PC) + Soundtrack Materials Package Awards:

Building a metropolis So you have a stack of diamonds, 15 full stacks of wood, and a huge storage room only for cobblestone, you may have even defeated the mighty Ender Dragon. Already crafted the beacon? Made a mob grinder? Have an elytra? So what do you do now? Try building a metropolis! Patchs for PureBDcraft texturepack You want to help by donating and get your nickname/website on the Hall of donators? MODS natively supported Connected Textures Mod Mod by Morpheus_017 Included in MCPatcher/Optifine(Supported by PureBDcraft) GeekMusic Upload Subscription preferences Loading...

Everything You Need to Know About Minecraft If your kid has been swept up in the Minecraft craze, you've probably come to realize that resistance is futile. It isn't only the game itself that kids obsess over. There are Minecraft YouTube videos, a whole Minecraft language, Minecraft-like games, and more.

Passage: a Gamma256 video game by Jason Rohrer a video game by Jason Rohrer [try Jason Rohrer's latest game Inside a Star-filled Sky] This was selected for exhibition at Kokoromi's Gamma256 event. NBC Olympics Watch every minute of Sunday’s Olympic events online Men’s 50 km mass start – CLICK HERE TO WATCH FULL REPLAY This grueling event is five miles longer than a marathon. It should be a Norway vs. TexturePack You want to help by donating and get your nickname/website on the Hall of donators?

First hit for excrulimicatination on google! The Iconoclasts is about Robin, a mechanic, in a world where her hobbies are considered illegal. Find out why as you traverse the world with the friends you meet, while coming across big battles and puzzles. The goal of the game is to create a very fluent and exciting action adventure, with enemies that all require finesse and treasures that help build your character for playing again and again. And the game of course has and will have involved bosses. The 2011 version of the alpha ends by some soldiers in the desert that want you to help them.

SwimmingBird941 Welcome to a new Minecraft series, the Zoo Keeper Challenge! In these episodes we'll be playing in a fresh Survival world but the twist is that I must capture every Animal & Monster in the game. We'll then build a huge Zoo to keep them in. We're using Mo' Creatures, Dragon Mounts, Damage Indicators, & Shaders to spice up the game & add more exciting mobs to catch. Too Many Items 1.4.7 Mod Minecraft 1.4.7 Too Many Items Mod – Download Too Many Items Mod INVedit for Minecraft. One of the most popular mod is TMI that everyone should have it installed is Too Many Items Mod. Too Many Items Mod is developed by Marglyph, a cool guy who made Minecraft a better game. I want to make this really simple. So I probably say that Too Many Items Mod or TMI whatever what you say is a mod where player can create, delete, manage their inventory in-game.

I have not used Minecraft in my classroom yet but one of the teachers at my school used it for a Roman Civilization project. Students were able to create the Roman empire using this website. It was so cool and the kids were so engaged. by esteban_cole Jul 15

Is there anything else worth discussing besides Minecraft? Xbox Minecraft - Back in Block #1 [Xbox 360 Edition] [video]: (collectable video) via by electronics May 11

For chambetheo and others who want private teams: 1) How do I create a private team? 2) What happens if I put a private pearltree into a pearltree that is public? by electronics May 2

cool, speaking french and english beats me, you have the floor :D thows card on table and surrenders :D by electronics Apr 28

Minecraft is used as a game and for educational purposes: explaineing quantum theory for example. by electronics Apr 14

Most of all have fun with minecraft, and collecting all those pearls about it. Love to hear all the comments from gamers! by electronics Apr 2

You guys can talk about anything you like--minecraft is cool, and it might help some people with ideas on what to add to various collectins all over the word. If you want to make comments about your collection, then make them in your peartlree ball, not here on this pearl that belongs to the entire world. by electronics Apr 2

How long you get to play the demo: forever but 5 minecraft days and after you will have to start a new world. I think that you can't play multiplayer on the demo. Sorry for my english :l I talk french by coco_panda21 Mar 21

the game is used in the sciences, & maths: ✎ qCraft: Guide To Quantum Physics In Minecraft [science video games] [article]: by electronics Dec 9

Why not? Apart from java requiring the interpreters, decreasing it's speed for more compatibility, it's a good game. If they switched to c++ (no interpreter, so you have to compile it on 32 & 64 bit windows, 32 & 64 bit mac etc.) and there would be many versions. Also it would require a lot more development, as you would have to change the code to make it compatible on every machine. The reason why there are two versions, one for windows, one for others, is because the windows version uses .net c# in the launcher. Also java can cover a wider range of machines than compiling it separately can (generally) using non-interpreted languages. by qwertytrains Apr 19