Gone too soon. TALENT at PIXAR. :(

Imgs For > John Lasseter Family. Special Effects: Titanic and Beyond. So You Want to Be in Pixels: Glenn McQueen NOVA: How does the animation process happen? 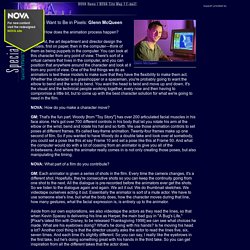 Pixar Planet. Who is Glenn McQueen and what was known about him? February 10, 2000 - FilmForce correspondent Kenneth Plume recently enjoyed a discussion with Pixar animator Glenn McQueen. 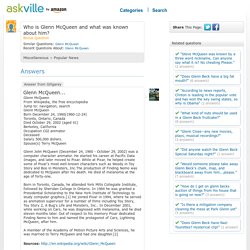 McQueen has served as a computer animator on Toy Story, was one of two Supervising Animators for A Bug's Life, and was the sole Supervising Animator for Toy Story 2. Before Pixar, McQueen worked at legendary FX house Pacific Data Images (Antz, Forces of Nature.) In his two-part conversation with Ken, McQueen discusses how CGI technology has changed over the last few years, what it takes to get in the door at a place like Pixar, and contemplates how increasingly advanced technology is enabling animators to focus more heavily on the characterization and "performance" of their characters. PLUME: Can you give me some background about yourself? Glenn John McQueen (1960 - 2002) 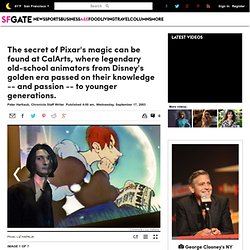 A shot of John Lasseter's first student film in 1979 where he made furniture come to life. Shot on 9/9/03 in Valencia. A Tribute to Joe Ranft. Discussion Boards: Pixar memorial for Joe Ranft ... highlights story Page 1 of 1 - LaughingPlace.com: Disney World, Disneyland and More. Joe Ranft ... someone who made the world a better place By Leo N. 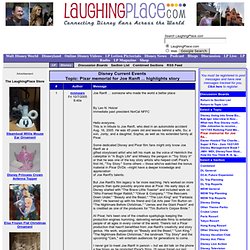 Holzer immediate past president NorCal NFFC Hello everyone, This is in tribute to Joe Ranft, who died in an automobile accident Aug. 16, 2005. “Toy” story man. I first fell for the comic art of Pixar while watching that intrepid spaceman Buzz Lightyear coif a troll doll during “cartoon dailies” at the Point Richmond, Calif., studio four years ago. 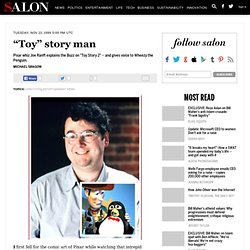 With the jolly and acute director John Lasseter officiating like the Ghost of Christmas Present in a Hawaiian shirt, a mass of crafts people observed Buzz oozing confidence and finesse in the uncharacteristic role of hairdresser, and the troll’s eyes blinking in nervousness — or, maybe, sexual tension. The room erupted in a dozen wisecracks as the animators envisioned Buzz taking the place of Warren Beatty in “Shampoo,” ad-libbing lines like “You are so much more beautiful than the other trolls.”

Lasseter concentrated on whether they could make Buzz’s combing stroke more vertical and modulate the troll’s blinking eyes just before Buzz combs downward. The director sighed in admiration at his team’s handiwork — and at the dexterity of his leading man. So, it seems, is Pixar. Joe Ranft. Early life[edit] Ranft was born in Pasadena,[1] and raised in Whittier. 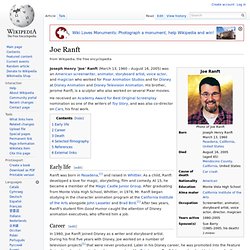 As a child, Ranft developed a love for magic, storytelling, film and comedy. At 15, he became a member of the Magic Castle Junior Group. A Brief Talk with Joe Ranft (Korkis Korner) by Jim Korkis. I have to admit that I have been extremely fortunate in my life. 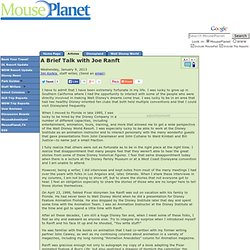 I was lucky to grow up in Southern California where I had the opportunity to interact with some of the people who were directly involved in making Walt Disney's dreams come true. I was lucky to be in an area that had two healthy Disney-oriented fan clubs that both held multiple conventions and that I could visit Disneyland frequently. advertisement When I moved to Florida in late 1995, I was lucky to be hired by the Disney Company in a number of different capacities, including entertainment, animation, tours, training, and more that allowed me to get a wide perspective of the Walt Disney World Resort.

I was especially lucky to be able to work at the Disney Institute as an animation instructor and to interact personally with the many wonderful guests that gave presentations from John Canemaker and John Culhane to Ward Kimball and Bill Justice—to name just a small fraction. Your resource for all things Disney. Remembering Joe Ranft (1960-2005) - Upcoming Pixar. On this day, Disney and Pixar legend, Joe Ranft, would have been 50 years old. 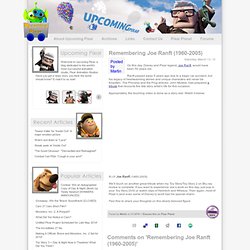 Ranft passed away 5 years ago due to a tragic car accident, but his legacy of heartwarming stories and unique characters will never be forgotten. The Princess and the Frog director, John Musker, had prepared a tribute that recounts the late story artist’s life for this occasion. Appropriately, the touching video is done as a story reel. Watch it below: R.I.P. Crash kills Marin Oscar nominee. Mark Prado Posted: 08/18/2005 05:06:31 AM PDT. 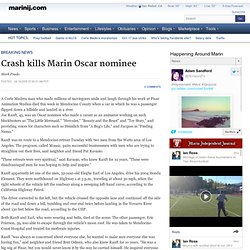 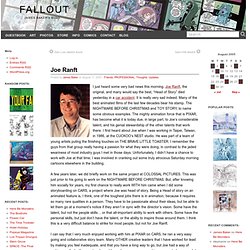 Joe Ranft, the original, and many would say the best, “Head of Story” died yesterday in a car accident. It is really very sad indeed. Many of the best animated films of the last few decades bear his stamp. The NIGHTMARE BEFORE CHRISTMAS and TOY STORY, to name some obvious examples. The mighty animation force that is PIXAR, has become what it is today due, in large part, to Joe’s considerable talent, and his genial stewardship of the other talents that work there. A few years later, we did briefly work on the same project at COLOSSAL PICTURES.