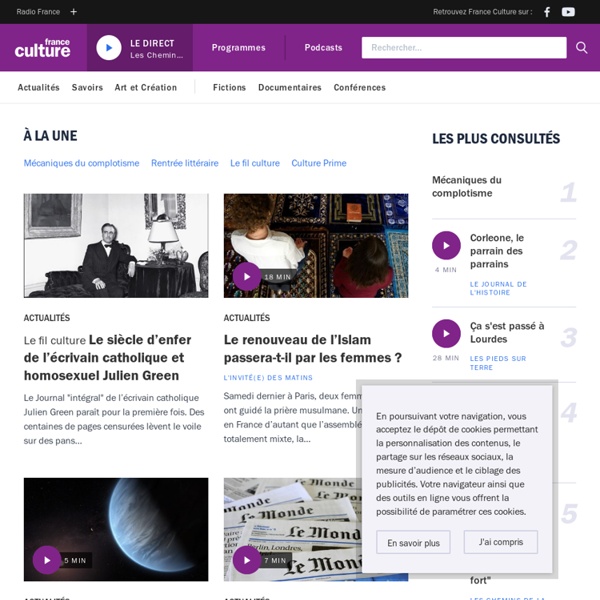 Blow: Venus & Adonis Last updated: Feb. 14, 1997 Go to the Libretto Homepage Music composed by John Blow Libretto anonymous Date of composition: ca. 1682 for the entertainment of King Charles II Wallpaper sorted by Date Sorted by Date There are 3886 free desktop wallpapers available below. You are on page 1 of 389. Your screen's resolution is 1600x1200 pixels. Quickly Download Every InterfaceLIFT Wallpaper!

Grammar Rules With nearly 580 links, this resource is ample material for courses on an advanced college level, and would be particularly good for those studying for exit exams, where a thorough knowledge of structure is required. It contains grammar guidance, with thousands of verb conjugations, research and hundreds of activities. Classification by part of speech was an important consideration in my creation by categories. My sincere thanks to Sandra Howard (Marin Catholic High School) for her valued contributions. Agreement of adjectives (GCSE French) Coffee Break French - Coffee Break Languages We offer free content in the form of audio podcasts for each of the seasons of Coffee Break French. In the audio podcasts you’ll be able to build your understanding of French and hear how words are pronounced. However, there’s no guidance on how the words are written. This is where the online course comes in.

The Lion King and Hamlet: Similarities and Differences Both families are royal families. Simba is the main character in Disney's The Lion King. he is the son of Mufasa, the king of the lions, which makes Simba a prince. Hamlet, from Shakespeare's The Tragedy of Hamlet, Prince of Denmark is the son of the tragically murdered King Hamlet, which makes him a prince too. The uncle characters are very similar. Most people know that, in The Lion King, Simba has an evil uncle named Scar. Scar is jealous of his brother, Mufasa, because he wants to be the king instead. DIY Steadicam, Glidecam This article isn't intended as a complete building guide...I really just wanted to chronicle some of the unique aspects of the stabilizer I put together. If you decide to copy what I've done here, I just ask that you give a little credit to 'YB2Normal' and send them over to my site to check out my other work. To be clear however, I take no credit for the physics behind why this works, or even the overall design. Really I only consider three aspects of the design original... the PVC gimbal, the use of all-thread for the main tube, and the wooden camera x-y plate. Putting together my own steadicam represented some unique challenges...

Boggle's World: ESL Worksheets for Kids Picture Descriptions Describing and Captioning Pictures Spot the Differences Story Questions Riddles SurvivalPhrases - French Podcast Podcasts in These Categories User Rating 5.0 Stars Based on 1 rating Description A Little Bit of Language Can Go Such a Long Way! Hamlet: Act 5, Scene 1, Page 8 Let me see. (takes the skull) Alas, poor Yorick! I knew him, Horatio, a fellow of infinite jest, of most excellent fancy. He hath borne me on his back a thousand times, and now, how abhorred in my imagination it is! My gorge rises at it. Cpasbien 21-09-2019 Aliexpress September in Style. $7 off orders starting from $60. 21-09-2019 Aliexpress September in Style. $4 off orders starting from $5 for new users. 22-09-2019 AliExpress 15% Off your order. 22-09-2019 AliExpress Up to 15% Off your order.

Common French Phrases When you live in a French-speaking environment for a substantial period of time, you begin to notice that there are some common French phrases that come back again and again. You'll hear these whether talking to a clerk at the post office or talking to a neighbor about absolutely anything under the sun. Not only will understanding these phrases help you get integrated into French daily life, but once you start using them in the right situations, you'll sound more and more native every day! Basic tourist French phrases are good for vacations, but integrating yourself into la francophonie (even if only for a week!) can be fun too. Some Common French Phrases

Plans for underwater 'oceanscraper' revealed Indeed, the future of human habitation, whether through choice or catastrophe, is often imagined (in popular culture at least) as being beyond Earth's orbit. Sub-aquatic living still seems, perversely it could be argued, very alien. Not so for Belgian architect Vincent Callebaut. He has revealed ambitious plans for a series of underwater eco-villages that could house up to 20,000 people each in the future.

Paris hosts first Arab contemporary art biennial "The attacks in Paris changed what we talk about," says Ella Graf, one of a group of German exchange students at the Institut du Monde Arabe (IMA), one of the Biennial's two principal venues. "Art was already an important part of our stay in Paris but now this exhibit is even more interesting to us, and photography is a great way to access this world." The Biennial of Contemporary Arab World Photography, located principally in the IMA and the Maison Européene de la Photographie (MEP) is showing work by more than 50 artists who have worked in the Arab world since the turn of the millennium. Following the attacks on 13 November in which 130 died, mosques in Europe and the U.S. have been vandalized and many Muslims have feared reprisals. But, for others, the disaster has been a cue to learn more about the Middle Eastern context. "Maybe it's because we all know Paris but only have an abstract impression of the Arab world.

Famous British Classical Music Composers By Aaron Green Updated February 01, 2015. William Byrd (1543-1623)William Byrd is perhaps the greatest English composer of all time. With hundreds of individual compositions, Byrd seemingly mastered every style of music that existed during his lifetime, outshining Orlando de Lassus and Giovanni Palestrina. Apart from his choral works, Byrd is considered by many to be the first "genius" of the keyboard. Many of his piano works can be found in "My Ladye Nevells Book" and the "Parthenia."