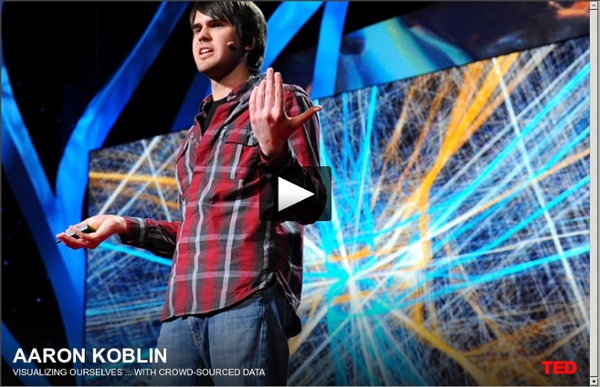 Clay Shirky: How cellphones, Twitter, Facebook can make history Technology TED Radio Hour asks: “Why do we collaborate?” This week’s TED Radio Hour examines “Why We Collaborate,” exploring why, and how, millions of people come together to work on online projects, sometimes for free. The episode begins with Jimmy Wales, the founder of Wikipedia, who spoke at TEDGlobal 2005, back when the site was still very new. The incredible growth of Wikipedia since […] Entertainment Carl Kasell’s dramatic LOLCats reading on TED Radio Hour, visualized Carl Kasell of NPR hosts the show Wait Wait… Don’t Tell Me.

Wired 14.06: The Rise of Crowdsourcing Remember outsourcing? Sending jobs to India and China is so 2003. The new pool of cheap labor: everyday people using their spare cycles to create content, solve problems, even do corporate R & D. By Jeff HowePage 1 of 4 next » 1. Story Tools Story Images Click thumbnails for full-size image: Claudia Menashe needed pictures of sick people. In October 2004, she ran across a stock photo collection by Mark Harmel, a freelance photographer living in Manhattan Beach, California. The National Health Museum has grand plans to occupy a spot on the National Mall in Washington by 2012, but for now it’s a fledgling institution with little money. After several weeks of back-and-forth, Menashe emailed Harmel to say that, regretfully, the deal was off. iStockphoto, which grew out of a free image-sharing exchange used by a group of graphic designers, had undercut Harmel by more than 99 percent. He can’t, of course. It took a while for Harmel to recognize what was happening.

Treemap When to use a tree map A tree map is a visualization of hierarchical structures. It is very effective in showing attributes of leaf nodes using size and color coding. Tree maps enable users to compare nodes and sub-trees even at varying depth in the tree, and help them spot patterns and exceptions. How tree maps work Many data sets have a hierarchical structure: items are divided into categories, subcategories, and so on. Each data item, or row in the data set, is represented by a rectangle. The rectangles are colored to reflect other attributes of the data set. Data requirements A tree map requires a somewhat complex data table. An example data set suitable for a treemap is: This table would be appropriate for a plain treemap. Expert notes Treemaps are a complex but powerful information visualization technique.

Top 20 New Bands Of 2012 - The Big Picture - The Big Picture - NME.COM - The worlds fastest music news service, music videos, interviews, photos and free stuff to win There's very few things that make January worthwhile. Film season is one (Shame being the highlight so far - read the review here - and of course the Golden Globes). Erm, what else? With that in mind, we recently picked 100 names for you to check out, a massive list of new music that should see you through the next couple of months. Grimes Not actually grime at all, Claire Boucher is rethinking electro pop instead. Spector Fred Macpherson's latest project, a dapper arch indie collective. A$AP Rocky Harlem's new rap prodigy, just signed for big bucks. DZ Deathrays Australian noiseniks that call to mind The Scare. Howler 2012's answer to The Strokes - expect a very successful year from this lot. Wise Blood A gloriously chaotic mess of Led Zep beats and Outkast-style funk. Azealia Banks You must know Banksy by now - rap's potty-mouted protegee. Friends Angular indie thrills from the Brooklyn collective. Discopolis Clue's in the title - kind of. [Pic from The Skinny] Willis Earl Beal King Krule Toy

Brenda Laurel Interview Why is design research important? Perhaps the single most pernicious sort of folly I have seen over nearly thirty years in the computer field is the belief on the part of engineers, designers, and marketing people is that they "just know" what will work for their audience. For extremely observant, experienced designer, this may indeed be true, but such people are exceedingly rare, and those who are most successful have "trained" their intuition by carefully observing and reaching deep understanding of certain kinds of people, cultures, and contexts. For the rest of us, that first "great idea" is usually a shot in the dark. Examining the idea to discover the hypotheses that are implicit in it gives the designer a platform for inquiry that will inform the project. It may also surprise and delight the designer. Full-blown ideas for great, innovative products do not come from research subjects. You've said that good design needs to understand "deep, roiling currents of our dynamic culture."

Crowdsourcing Data Visualization and Infographics - Smashing Magazine Advertisement The main goal of data visualization is its ability to visualize data, communicating information clearly and effectivelty. It doesn’t mean that data visualization needs to look boring to be functional or extremely sophisticated to look beautiful. To convey ideas effectively, both aesthetic form and functionality need to go hand in hand, providing insights into a rather sparse and complex data set by communicating its key-aspects in a more intuitive way. Yet designers often tend to discard the balance between design and function, creating gorgeous data visualizations which fail to serve its main purpose — communicate information. In both print and web design infographics — visual representations of information, data or knowledge — are often used to support information, strengthen it and present it within a provoking and sensitive context, depending on designer’s creativity. Data Visualization and Infographics Virtual Water11Simple, clean, elegant and effective. George W.

Exclusive interview with Brenda Laurel: We "brought girls roaring into the online game space" Brenda Laurel spoke at TED in early 1998 — at a watershed moment. In 1997, she launched Purple Moon to make smart computer games aimed at girls. By 1999, the company had come to a much-publicized end. But between start and finish, Purple Moon marked a sea change in the girl-game market. Brenda Laurel: Games for girlsFrom the interview: I adored those [games]. Can you talk a bit about Purple Moon’s development in the two years after this talk — you mention more Rockett titles, for instance. Yes, but in a more general way. Then we developed a series based on soccer (The Starfire Soccer Challenge), because women’s soccer was such a big deal to girls in that time period — during the time when American women were getting close to winning the World Cup. The moderate success of the first Secret Paths title led us to develop two more. Since 1999, when Purple Moon ended, can you discern a line from your work to the next generation of games and online worlds? You bet.

A Simpler Social Technographics Ladder I’ve been thinking about how we use social media. How can we characterize what we do? I have always used Charlene Li and Josh Bernoff’s Social Technographics ladder for thinking about the various levels of social media participation. I want to make it simpler for use in teaching others about social media. Perhaps there could be as few as 4 levels of involvement: Creation. Curation. Conversation. Observation. These categories represent a subjective continuum and most of what we do is some combination of each. What’s so striking to me about the Forrester ladder: It all starts with somebody’s creation. Perhaps a simple sequence could be: Listen, talk, collect, and create. This eliminates 3 levels from the original ladder and may be simpler to describe to a physician audience. Tagged as: conversation, creation, Curation, Forrester, observation, Social media, technographics

Ethics of Crowdsourcing – What Constitutes an Abuse of the Commons | Off the Map - Official Blog of FortiusOne While getting ready to launch Finder! we had an internal debate whether or not to put limits on dataset downloading. There were several options, ranging from requiring a user to be logged in before they downloaded to limiting the number of downloads a user could make in a day. A lot of the argument centered around the value of raw data – echoing the O’Reilly manifesto that “data is the Intel inside“. This belief holds that the value of the NAVTEQ’s and TeleAtlas’s of the world is derived from the proprietary data they collected. One side of the company felt that by not limiting access to data we were giving away the family jewels. Now that Finder! The biggest concern is around systematic downloading of data and the potential for that to impact other users experiences on the site. I’m not sure a giant tar ball of data is the best way to go for us, especially since the data is available in a variety of formats. “The two-way API will definitely help with the number of uploads.