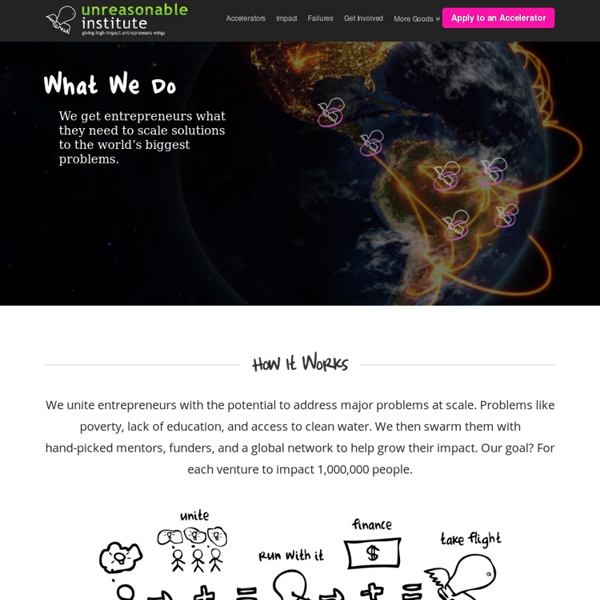 A huge thank-you to our 2013 Unreasonable Mentors! We accelerate ventures that will define progress in our time. Annually we unite 25 high-impact entrepreneurs from around the world in Boulder, CO for 5-weeks. There we provide world-class mentorship, access to seed capital, intensive skill training, a global network of support, & international exposure. Learn more » On an otherwise reasonable evening in July, over 1000 people packed an auditorium in Boulder Colorado for the culmination of the Unreasonable Institute.

The Educated Entrepreneur's Blog A fellow entrepreneur gave me a slight nudge today that motivated me to post today’s blog. I think you will certainly find value in it as it incorporates some of the best minds of the 21st century. Remember….. The secret to learning as an entrepreneur is to mix equal parts of inspiration and perspiration.

Sustainability Services Many of us feel that the time is ripe to "make Sweden's office coffee rooms sustainable once and for all". In order to investigate interest and possibilities, we will hold a first 'problem in the middle' type workshop in Stockholm on the 26th of March, and are working to ensure key representatives from all relevant sectors will come and bring their knowledge, experience, ideas and energy, so that together we can make this change for the better. Of course sustainability performance improvements in the coffee room are not core business, but helping Sweden take this further step towards responsible consumption is good for brand Sweden and hence good for us all. It is also an exercise that in a small but tangible way helps contribute to the continual development of culture and practice of sustainability thinking. So, who could this be interesting for?

How to Break into a Field That Seems Un-break-into-able Good Life Project is a weekly web show that features in-depth interviews with acclaimed artists, entrepreneurs, creators, and world-shakers. To receive the mp3 version of our shows, please sign up here. How many people dream of traveling the world, photographing everything, from fashion models to passion causes, and being extraordinarily compensated for the work? I’m guessing more than a few…million! And, okay, even I confess to occasionally letting my Instragam-fueled shooting frenzies lure me into the occasional daydream of becoming a globetrotting professional photographer. For graphic designer turned highly sought after commercial photographer, Nick Onken, though, that fantasy became a reality.

Innovation Cities Global Index 2011 from 2thinknow : City Rankings List » Innovation Cities Index & Program – City data training events from 2THINKNOW for USA Canada America Europe Asia Mid-East Australia City innovation classifications and rankings, 2011. World’s largest city classification and global ranking with 331 benchmark cities classified, and top 125 cities analyst ranked in 2011. Based on 2thinknow analysis of cities on 162 city indicators from 2thinknow City Benchmarking Data program. Since 2007. Two Questions to Close the Greatness Gap « The Bold Academy “Musicians must make music, artists must paint, poets must write if they are to be ultimately at peace with themselves. What human beings can be, they must be. They must be true to their own nature. This need we may call self-actualization… It refers to man’s desire for self-fulfillment, namely to the tendency for him to become actually in what he is potentially: to become everything one is capable of becoming.” – Abraham Maslow Throughout life, we will constantly be confronted with unfavorable encounters, negative energy, and necessary evils.

Curated News and Advice for Entrepreneurs » CLASS OF 2013: Here’s What Billionaires Want You Graduates to Know About Success, Wealth and Happiness Forbes has laid out a list of the best graduation advice ever given — BY BILLIONAIRES! There are of course a few of the normal platitudes – “Live each day as if it’s your last,” says Steve Jobs, which was actually probably the only cliche part in an otherwise stellar Stanford commencement speech in 2005 . But we’ve compiled some of the best — occasionally contrarian — advice below, with links to as many of the actual speeches as we could find. Happy graduation, Class of 2013!

Building Your Company’s Vision The Idea in Brief Hewlett-Packard. 3M. Sony. Out of Sight, Till Now, and Giving Away Billions Rumpled by habit, limping on old knees, smiling faintly after a night of celebration, Chuck Feeney stepped out of a building on Park Avenue Monday night and vanished, carried away on a river of passing strangers who knew nothing about him. Perfectly disguised as an ordinary man, Mr. Feeney, one of the most generous and secretive philanthropists of modern times, had dropped from sight once again. It is a skill he mastered over decades. Last year, the foundation Mr. Feeney created, the Atlantic Philanthropies, gave $458 million in grants around the world, more than any United States charity except two, the Ford and the Bill and Melinda Gates Foundations.

Blog – Green Renaissance Made in Tohoku 2 April 2014 Nature Turns into Disaster Earthquakes, typhoons, thunderstorms, these are all a natural part of the earth.