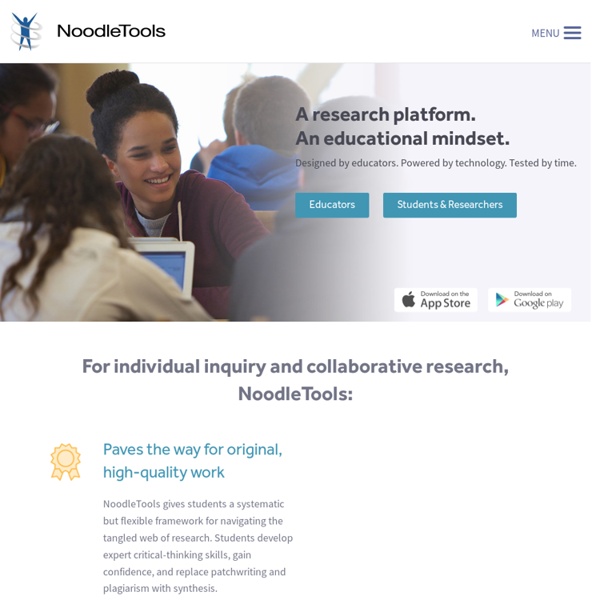 We love Noodletools and what it does to prepare students for college. It is a real resource for Common Core Standards. It helps students attain college ready skills.– A. Weber, High School Librarian NoodleTools is the most reasonable and most useful library subscription that contributes to student success. It is a powerful teaching tool for recording, organizing, and citing research.

Grammar Bytes! Grammar Instruction with Attitude Grammar Instruction with Attitude Home • Terms • Exercises • MOOC • Handouts • Presentations • Videos • Rules • About • Shop • Feedback ©1997 - 2019 by Robin L. How to Cite a President Trump Tweet - EasyBib Blog The use of innovative technology by presidents to address the nation isn’t a new concept. Abraham Lincoln was one of the first presidents to use the telegram, Franklin Roosevelt spoke via radio through his Fireside Chats, and Harry Truman was the first president to broadcast on TV. It isn’t too surprising that our Commander-in-Chief can now be coined as the “Commander-in-Tweet.” President Donald Trump’s excessive use of Twitter has kept us up-to-date on his promises, goals, and thoughts on pretty much every topic from jobs, international relations, and even celebrity meetups.

The Oregon Trail This web site is brought to you by teachers Michael Trinklein and Steven Boettcher, creators of The Oregon Trail, the award-winning documentary film which aired nationally on PBS. During the three years we spent researching the film, we found lots of great material we thought would be great for teachers and home schoolers--so we built this this site to make it all available. Enjoy the adventure! Copyright c. 2012 by Boettcher+Trinklein Inc. All the articles on this site were written by Michael Trinklein. Contact us at mike@btmedia.us plasq.com Comic Life 3 is now available for both Mac and Windows! “4 Stars and Editors Choice.” MacUser Dec. 2013 "Awesome!... Pixar's 20+ Rules on Storytelling for Teachers and Students A week ago I posted here in Educational Technology and Mobile Learning a poster made by Pixar in which they featured 22 rules on storytelling and it was really so informative reading all the feedback you sent me , however, today I woke up to an email from a colleague of mine teaching in the State in which he shared with me the graphic below. I was really surprised because at the time I published the first poster on Pixar rules of storytelling I did not know that such a graphic exists and going through it I found it way better than the one I initially posted earlier . I mean better in terms of layout and organization of its content. Have a look at it below and let us know what you think of it. Enjoy

Plagiarism Checker A list of key features: 1. Billions of web pages This tool has the ability to check plagiarism by matching your content against billions of webpages on the Internet. Once you upload your content, it will automatically run it against every existing content on the web within seconds, making it the most sophisticated yet fastest plagiarism scanner you'll ever come across in your lifetime. How to Cite President Obama's Farewell Address - EasyBib Blog President Barack Obama delivered his farewell address to the nation on Tuesday, January 10th, signifying the end of his historic time in office. Now you’ve been tasked by your teacher to write about and cite it. Let’s review how you can easily cite this speech if it was found online as a transcript or a video. How to Cite a Transcript of the Speech

Klondike - Rush for Gold In the summer of 1897 two ocean going steamers landed on the west coast of the United States. One ship, The Excelsior, landed in San Francisco and three days later The Portland landed in Seattle. Down the gangplank of these two ships went a rag-tag group of men and women carrying sacks of gold. Find Products & Services - ProQuest Historical Newspapers More than just the article Front-page headlines, classified ads, marriage and death announcements, comic strips, reviews, display advertising, editorials, birth notices, photographs, and many other article types combine to help today’s researchers not only understand the news of yesteryear, but also the context in which it was made. Find information quickly ProQuest makes it easy for both novice and experienced researchers to find relevant information quickly, with basic and advanced search options. And, because the newspapers in this collection reside on a single platform, users can cross-search all ProQuest Historical Newspapers titles with one another and with all other ProQuest resources a library may have. Transcend time AND geography!

A Non-Freaked Out, Focused Approach to the Common Core CCSS Implementation Tip: When folks start to freak out about the CCSS, go to the Grand Canyon. (That’s me on the left.) When I set out in June 2012 to blog through the Common Core State Standards (CCSS), I was, as long-time readers know, a diehard standards avoider.