Design & Make A Book With Our Simple Free Guide 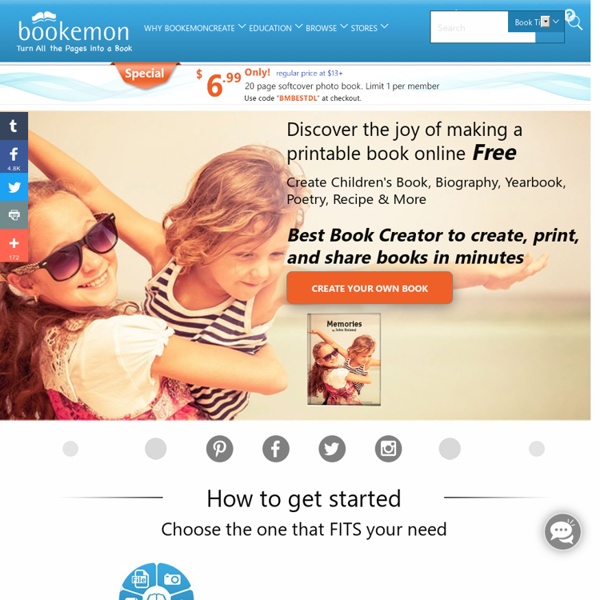 Bookemon makes it possible for anyone to make their own bookstore-quality books quickly and easily. These custom-created, 100% personalized books are perfect for preserving memories, photos, drawings, family recipes, and stories to share with family, friends, and future generations. No Minimum Order Highest Quality Printing Professional Binding Fast Turnaround Get Started for FREE! The Bookemon Process is simple! You can start with a blank template, use one of our pre-designed layouts, or upload a document you've already created. We provide you with ample free design tools and libraries of clipart, backgrounds and frames to make your book, your way.

My StoryMaker : Carnegie Library of Pittsburgh my Storymaker® was named one of the Best Websites for Teaching and Learning by the American Association of School Librarians, a division of the American Library Association. People worldwide enjoy my StoryMaker®. Find out what all the fun is about! You have the power to decide -- choosing characters, taking them on adventures and creating your very own story along the way. my StoryMaker® lets you control characters and objects -- and it creates sentences for you! Or, you can enter your own words. PULP-O-MIZER: the custom pulp magazine cover generator When you purchase your custom pulp magazine cover on a printed product, the reliable Pulp-O-Mizer cranks it up to high gear and - after a few seconds of groaning and sputtering - it spits out a high resolution image at (or even over) 300 pixels to the inch. The image is immediately transmitted across the sub aetheric waves, and, well! That's when things really get interesting. We entrust your orders to well trained, electrically motivated henchmen and henchwomen. When your order arrives at our hidden facility these henchpersons burst into action: the presses fly, the hamster wheels spin, the Interociter... well... we think it interocirates, sort of, and when all's done a high quality Pulp-O-Mized product flies out of its mysterious mechanism and is swept up, before it can escape, by the unflinching claws of our own patented Ship-O-Matic. But even now, the adventure has barely begun!

Seven Places to Find Free eBooks Every year schools around the world spend thousands of dollars on textbooks that are often outdated by the end of their first year in the classroom. Ebooks, many of them free, can represent huge savings for schools over purchasing textbooks. Here are seven places that you can find free ebooks. 1.

Printing Press The interactive Printing Press is designed to assist students in creating newspapers, brochures, and flyers. Teachers and students can choose from several templates to publish class newspapers, informational brochures, and flyers announcing class events. Text added to the templates can be modified using a simple WYSIWYG editor, which allows students to choose text features, such as font size and color. 22 Incredible Photos of Faraway Places Thailand Chances are you already know Steve McCurry as the man who took one of the most iconic photos of our time. It was of a 12-year-old Afghan refugee girl who's piercing green eyes told us her harrowing story. The image itself was named "the most recognized photograph" in the history of the National Geographic magazine and her face became famous as the cover photograph on their June 1985 issue.

Houses Gone Wild: Haunting Photos of Abandoned Homes We think of feral dogs as dangerous, foreboding and to-be-avoid – but wild houses have a strange allure despite (or likely because) they are abandoned abodes, deserted homes gone from domestic spaces slowly back to nature. As photographer James D Griffioen muses, the Latin root refers both to while beasts but also to something that belongs to the dead, gone back to the Earth. Some of his shots capture this process at an incredibly late stage, such as the house above which is entirely camouflaged by the greenery that has grown to cover it – only discernible because the branches and vines conform to the shape of the structure. Others photos catch the domestic devolution at intermediate stages, snapshots of partial overgrowth where there is still some strange balance of building and nature – one could almost imagine someone still occupying this structure and simply never leaving it.

Main Page On August 26 2020, the Project Gutenberg website underwent some major changes. These changes had been previewed since early 2020, and visitors to the old site were invited to try the new site, including giving input via a brief survey. The old site is no longer available. If you found yourself on this page unexpectedly, it is because an old page was redirected here. Breathtaking Photos of Europe Anyone who lives in Europe, has ever been there, or even dreamed of visiting knows the incredible variety, striking characteristics and history driven culture that exists on this continent. We bring you collection of 44 best photos from all over the Europe. Enjoy. (Click photo to enlarge) Belgium Croatia

70 Photos That Will Take Your Breath Away We here at DPShots believe that the easiest way to learn photography is to learn it by example. Every now and then we come up with some amazing photography examples that take your breath away. This post is no different.