11 Quick and Amazing ways to use PowToon in your Classroom by PowToon! 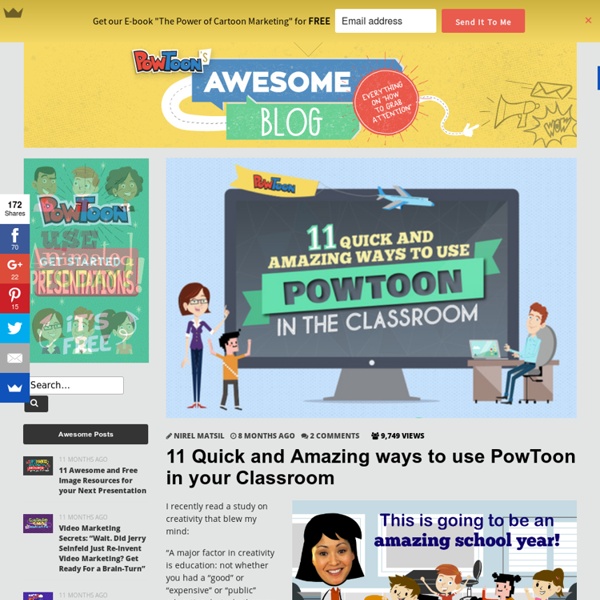 I recently read a study on creativity that blew my mind: “A major factor in creativity is education: not whether you had a “good” or “expensive” or “public” education, but whether you were encouraged to develop your creativity starting at an early age and continuing throughout your school years.” – Adobe.Inc We saw this first-hand, when Edson Tellez, a volunteer teacher in rural Mexico, wrote to us about how PowToon changed the way his students viewed the world, “they’re getting more creative, more receptive, and more dynamic in each class.” The mind blowing fact is that developing creativity is the number one determining factor in the overall success of your students! And PowToon wants to help you ignite this creativity! We are standing at an incredible moment in time, at the intersection between technology and creativity…And this is why we at PowToon, have dedicated ourselves to creating the most exciting, engaging, out-of-this-world templates for school! 2. 3. 4. (Ms. 5. 6. 7. 8. 9. 10. Related:  Flipped 3 • Inspiring movies for ESL • Présentations

CogDogRoo - StoryTools 50 Web 2.0 Ways to Tell a Story (return) Note! 50+ Ways is no longer being updated here but over at the new site for 50+ Web 2.0 Ways to Tell a Story-- It has more organizational features and includes ways for you to add content to the site once you join the new wiki. Below you will find 50+ web tools you can use to create your own web-based story. Again, the mission is not to review or try every single one (that would be madness, I know), but pick one that sounds interesting and see if you can produce something. I have used each tool to produce an example of the original Dominoe story, plus links are provided, where available, to examples by other people. Slideshow Tools Generates content that allows linear playback of a series of images, some with ability to add audio. 2. Upload images from computer or flickr or upload PowerPoint files. 3. 4. "RockYou! 5. 6. 8. 9. pictobrowser 11. 12. 13. 14. 15. 17. 19. 24.

Symbolism Short Film Activity by Colleen W on Prezi 'Your whole life is the Holocaust!' The woman who was born in Auschwitz It was at the age of seven, when asked at school to write down her name and place of birth, that Angela Orosz was first made aware she had been born in Auschwitz. “I really had a hard time with that word,” she said. “I was begging my mother, ‘can we change it?’ Orosz said she had no idea then what Auschwitz, the Nazi extermination camp, actually meant. It would take her more than a further half century before she felt able to recount the story of her and her mother, who died in 1992. She had weighed just 1kg and was too weak to cry. But it was in a German courtroom just over a week ago that the now 71-year-old made one of her most courageous decisions yet, to take to the witness stand in the case of Reinhold Hanning, a 94-year-old former SS guard, in what will be one of the last from the Nazi concentration camps. “In fact, it was far more than six million that were murdered,” she told the Guardian in Dresden this week. Orosz said her hopes rest on Hanning finally deciding to speak out.

How to Transform Your Classroom With Augmented Reality Augmented Reality is changing education. What started out as something that was simply “cool” has become a way to engage learners like never before. In fact, while I was first introduced to Augmented Reality through the Aurasma App, I never imagined that while walking through a trendy neighborhood in Washington D.C. this past summer, I would come across the first public interactive augmented reality mural dedicated to the life of the actor Paul Robeson. Designed by artist Corey L. Stowers, this mural allows viewers to scan and thus trigger images of his artwork with their mobile devices, accessing historical videos and original content that depict the life of the great athlete, performer, and civil rights activist. It was at this moment that I realized that Augmented Reality was a way to bring a new dimension to learning. What is “Augmented Reality”? How can I start using AR in my classroom? And why exactly should I start doing this? What are the best AR apps and resources out there?

Classroom Aid | Game Building Resources The best FREE resources of game building for teachers and children: Building games for teaching Teach with Portal – Today, innovative educators are finding ways to incorporate Portal™ and Portal 2 into their classrooms—helping teach physics and critical-thinking skills. It’s eye-opening to see how video games can be used in amazing and unexpected ways to help educate our next generation. You’ll find the beginnings of an engaging set of lesson plans, created by teachers, using the Portal 2 Puzzle Maker. Teachers sign up for the Education Beta and get access to Portal 2 and the Portal 2 Puzzle Maker and a teacher-created collection of puzzles for as many students as they’d like – for free. Machinima (from Knowclue’s wiki) – Film making in virtual worlds can have many roles in education from digital story telling and making documentaries by students in the K-12 classroom to creative expression in the Arts to training farmers about climate change in developing nations. Others Bookmarks

The Seven Best Short Films for ELT Students - Kieran Donaghy I’ve been writing lesson plans designed around short films for my website Film English for six years. Teachers often ask me how I find the short films I use in my lesson plans. The answer is quite simple: I’ve watched literally thousands of short films and developed an instinct for the type of engaging and simple short films which will work in the ELT classroom. The Mirror The Mirror is a short film by Ramon and Pedro which tells the story of a boy’s journey from childhood to old age. The Notebook The notebook is a moving short film by Greg Gray and is wonderful for introducing the theme of empathy. The Present The Present is a gripping short film with a wonderful twist by Jacob Frey which deals with the themes of empathy, teenagers and disability. Soar Soar is a delightful short film by Alyce Tzue which can be used to get students to predict and write a narrative. I Forgot My Phone i-Diots Fear of Flying I hope you like the short films and find the lesson plans useful.

Creator Processing ... Personal $ Svg $20 ✓ Up to $75 merchandises for personal use. Merchandise $ License to use artwork in merchandises (T-Shirt, Mug, poster, etc). Single Use $ License for single-purpose non-merchandising use. Unlimited $ Unlimited personal or commercial use. Custom $TBD Custom license, with terms subject to prior arrangement. Please contact licensing@tagxedo.com for more information By accepting this license, you agree to the Tagxedo's Terms of Service, and you agree that you have acquired the right to use the source image to create the Tagxedo artwork, and that you indemnify and hold harmless Tagxedo and its employees and officers from any harm are liability that may incur. Please contact licensing@tagxedo.com if you have any question. 29 Incredibly Useful Websites You Wish You Knew Earlier There are so many wonderful websites around, and it is difficult to know each and every one of them. The below list provides some of those websites that I find particularly helpful, even though they are not as famous or as prevalent as some of the big names out there. 1. BugMeNot Are you bugged constantly to sign up for websites, even though you do not wish to share your email? 2. This nifty little website tracks whether the emails sent by you were opened and read by the receiver. If you are on a constant lookout of free full length movies, then Zero Dollar movies provides a collection of over 15,000 movies in multiple languages that are available to watch for free on Youtube. 4. Livestream allows you to watch and broadcast events live to viewers on any platform. scr.im converts your email address into a short custom URLs, that can be shared on public websites. 6. TinEye is a Reverse Image search tool which is as accurate as Google’s Reverse Image search tool. 7. 8. 9. 10. 11. 12. 13.

Merry Christmas Mr Bean Teacher's note; The activities in the worksheet at the bottom of this post are based on the full episode available on DVD or on cannot be embedded here). This post contains some exercises based on the embeddable youtube clips. The answers are in the worksheet. DVD availablehere Mr Bean celebrates the traditional British Christmas: the baubles, the crackers, the nativity scene, the carols, the presents, the turkey and the mistletoe... they are all here. You are going to discuss Christmaswatch the Christmas Mr Bean episode and do some activitiesfind Christmas words in a word search exercise write the story in the past tensefind out more about the typical British Christmas and some of the Christmas things in the video. Discuss Do you celebrate Christmas? Watch clip 1 Answer the questions in the interactive exercise after you watch Did Mr Bean have any Christmas decorations? Now do exercise 1 (the answers to questions 9 and 10 are in the next clip) Watch clip 2