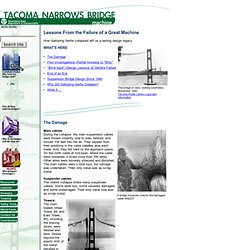 The Damage Main cables: During the collapse, the main suspension cables were thrown violently side to side, twisted, and tossed 100 feet into the air. They slipped from their positions in the cable saddles atop each tower. And, they fell hard on the approach spans. On the north cable at mid-span, where the cable band loosened, it broke more than 350 wires. Suspender cables: The violent collapse broke many suspender cables. Towers: The main towers (West Tower, #4; and East Tower, #5), including the bracing struts, were twisted and bent. Deck-Floor System: Not surprisingly, the concrete and steel of the center span that now lay on the bottom of the Narrows was deemed a total loss. Side Spans: The loss of the center section, followed by the dropping of the side spans, caused substantial damage. A Hand-Cranked Automaton That Mimics the Effect of a Raindrop Hitting Water.

This little wood automaton is meant to mimic the effect of a water drop hitting a body of water, all using concentric rings cut from wood that are manipulated by a hand crank. 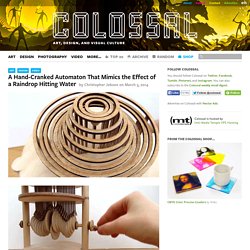 The piece was created by UK-based designer Dean O’Callaghan, inspired by the work of Reuben Margolin (most likely his round wave sculpture). (via The Automata Blog) A mesmerizing pendulum wave demonstration with 16 bowling balls in a North Carolina forest. Elementary STEM Activity 2 - Designing and Constructing a Pendulum.pdf. ISTS homepage. NPASS2: National Partnerships for After School Science. The game of pinball is a relatively recent invention. 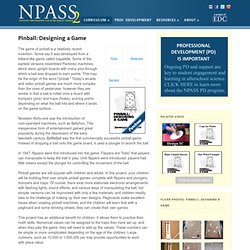 Some say it was developed from a billiard-like game called bagatelle. Some of the earliest versions resembled Pachinko machines, which were upright boards with many pins through which a ball was dropped to earn points. This may be the origin of the word "pinball. " Today's arcade and video pinball games are much more complex than the ones of yesteryear, however they are similar in that a ball is rolled onto a board with bumpers (pins) and traps (holes), scoring points depending on what the ball hits and where it lands on the game surface.

Nineteen thirty-one saw the introduction of coin-operated machines, such as Ballyhoo. In 1947, flippers were first introduced into the game. Pinball games are still popular with children and adults. This project has an additional benefit for children. Some intuitive physics is also involved in pinball games when launching the ball. Wallace and Gromit - World of Invention. STRANDBEEST. Arvind Gupta. Our core belief is that children learn by doing - by touching, feeling, cutting, sticking -- pulling things apart, putting things together. 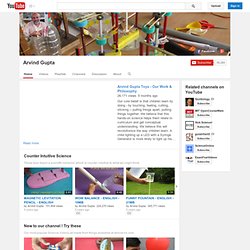 We believe that this hands-on science helps them relate to curriculum and get conceptual understanding. We believe this will revolutionize the way children learn. A child lighting up a LED with a Syringe Generator is more likely to light up his village tomorrow. Our approach is inclusive. All the materials used in our activities are very affordable and accessible to every child across the globe, developing or developed countries alike. 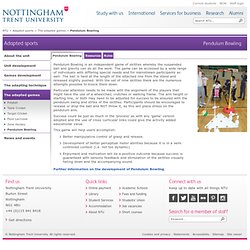 The game can be accessed by a wide range of individuals with differing special needs and for mainstream participants as well. The ball is held at the length of the attached line from the stand and released slightly pushed. Galimoto! Self-Made Toys on Pinterest. Galimoto Boy. Found materials + engineering process = toy. We didn’t have enough wire so we re-used cardboard tubes, empty boxes, egg cartons, and plastic jar lids to create toys called “Galimotos” in the Malawian children’s tradition as recounted in the children’s book, Galimoto by Karen Lynn Williams and illustrated by Catherine Stock. 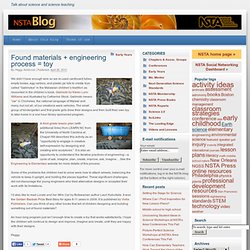 Galimoto means “car” in Chichewa, the national language of Malawi and many, but not all, of our creations were vehicles. The small group of kindergarten and first grade girls drew their designs and then built their own toy to take home in a one hour library sponsored program. A third grade lesson plan (with additional links) from LEARN NC from the University of North Carolina at Chapel Hill describes this activity as an “opportunity to engage in creative self-expression by designing and creating wire sculptures.” Psyclone Pendulum Thrill Ride. Spiral Wishing Wells. Funnel Physics. 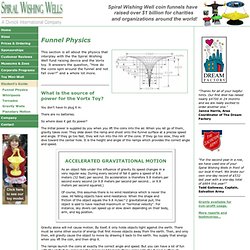 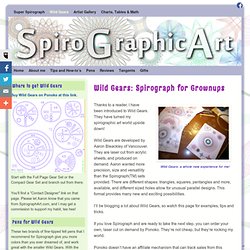 Thanks to a reader, I have been introduced to Wild Gears. They have turned my spirographic art world upside down! Wild Gears are developed by Aaron Bleackley of Vancouver. Fermi's Motion Produces a Study in Spirograph. Mad Scientist: Pendulums, Patterns from Sand. The Mad Scientist In this experiment, we will be examining the pendulum. 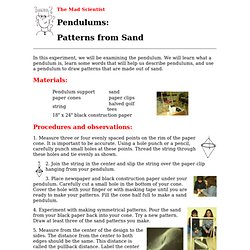 We will learn what a pendulum is, learn some words that will help us describe pendulums, and use a pendulum to draw patterns that are made out of sand. Materials: Procedures and observations: 1. 2. Activity Guide: Pendulum Motion. Swinging back and forth, the solo trapeze is a giant pendulum just like the one in a grandfather clock. 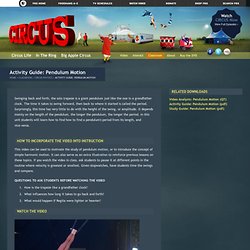 The time it takes to swing forward, then back to where it started is called the period. The Science of Swinging. Swing in Time. Amusement Park Physics. You've bought your ticket and boarded the roller coaster. Now you're barreling down the track at 60 miles per hour, taking hairpin turns and completing death-defying loops. Cabaret Mechanical Theatre. Www.robives.com. Milk Carton Marble Run. Humming.Bird. Mechanical Toy Set. A comprehensive set of traditional mechanisms for young children. The 10 wooden toys are based on traditional designs of toys that incorporate mechanisms, all of which are used today in all kinds of machines. The accompanying book provides questions for use in product evaluation activities and support materials designed to help children understand that drawings can communicate a variety of ideas and information.