The Compass - Water: Too Much And Not Enough - How water shaped us - BBC Sounds.

Map Viewer. The carbon and water cyles, climate and change. Climate urgency: we've locked in more global warming than people realize. While most people accept the reality of human-caused global warming, we tend not to view it as an urgent issue or high priority. 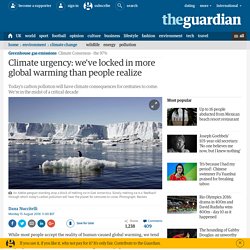 That lack of immediate concern may in part stem from a lack of understanding that today’s pollution will heat the planet for centuries to come, as explained in this Denial101x lecture: So far humans have caused about 1°C warming of global surface temperatures, but if we were to freeze the level of atmospheric carbon dioxide at today’s levels, the planet would continue warming. Over the coming decades, we’d see about another 0.5°C warming, largely due to what’s called the “thermal inertia” of the oceans (think of the long amount of time it takes to boil a kettle of water).

The Earth’s surface would keep warming about another 1.5°C over the ensuing centuries as ice continued to melt, decreasing the planet’s reflectivity. Alaska's Last Oil. Rise in atmospheric CO2 slowed by green vegetation. Image copyright SPL The growth in the amount of CO2 in the Earth's atmosphere has been slowed by the increased ability of plants to soak up the gas. 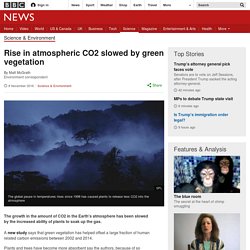 A new study says that green vegetation has helped offset a large fraction of human related carbon emissions between 2002 and 2014. BBC Taster - Bitesize Masterclass No.2. Giant icebergs play 'major role' in ocean carbon cycle. Geogarific: Water and Carbon in the Amazon Rainforest. For the past 6 years teaching geography A-level I've had to choose between ecosystems and plate tectonics so sadly I haven't taught much on tropical rainforests for quite a while (you can guess which of the two aforementioned topics is more popular!). So I was excited to see the Amazon rainforest as one of the core case studies in the textbook for this new OCR spec.

I hope your enjoy the lesson and resources I've prepared (click on the link below to download). For a topic with such a wealth of information available it sure took me a long time to decide what to put in! I haven't actually used it myself yet but I'm expecting it will take at least 2-3 lessons plus homework. When Permafrost Melts, What Happens to All That Stored Carbon? A new study documents evidence of a massive release of carbon from permafrost as temperatures rose at the end of the last glacial period. 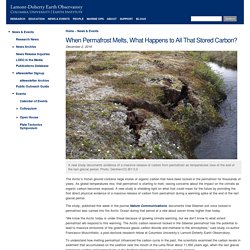 Photo: Dentren/CC-BY-3.0. The Carbon Cycle 3D Animation. The Amazon Region Protected Areas program is the single largest tropical forest conservation program in history. The Basics of Climate Feedback Loops. Systems and Feedbacks. Maps & Data. Why Forests? Why Now? A Preview of the Science, Economics, and Politics of Tropical Forests and Climate Change. 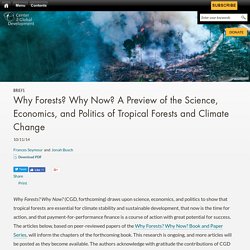 Why Now? (CGD, forthcoming) draws upon science, economics, and politics to show that tropical forests are essential for climate stability and sustainable development, that now is the time for action, and that payment-for-performance finance is a course of action with great potential for success. Water in the Anthropocene. National Geographic : National Geographic. Join Leonardo DiCaprio as he explores the topic of climate change, and discovers what must be done today to prevent catastrophic disruption of life on our planet. ➡ Subscribe: ➡ Get the soundtrack on iTunes: ➡ Discover your climate impact: ➡ Learn more & take action: Watch an exclusive sneak peek of MARS: Act Now #BeforeTheFlood: For every use of #BeforeTheFlood across Facebook, Twitter, and Instagram between October 24 – November 18, 21st Century Fox and National Geographic will together donate $1 to Pristine Seas and $1 to the Wildlife Conservation Society, up to $50,000 to each organization. 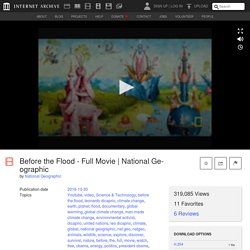 About Before the Flood: Before the Flood, directed by Fisher Stevens, captures a three-year personal journey alongside Academy Award-winning actor and U.N. Wetlands Restoration Definitions and Distinctions. What Is Wetland Restoration? 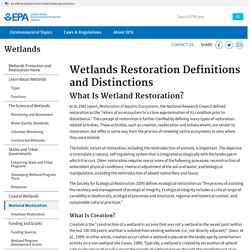 In its 1992 report, Restoration of Aquatic Ecosystems, the National Research Council defined restoration as the "return of an ecosystem to a close approximation of its condition prior to disturbance. " The concept of restoration is further clarified by defining many types of restoration-related activities. These activities, such as creation, reallocation and enhancement, are similar to restoration, but differ in some way from the process of renewing native ecosystems to sites where they once existed. BasinOverview. Anglian river basin district river basin management plan. The carbon and water cyles, climate and change. Key Stage Five. This section contains a selection of teaching resources that were produced by the Met Office education team for Key Stage Five (ages 16 - 18). 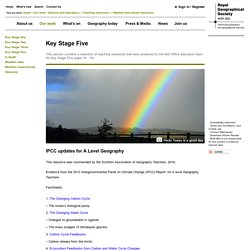 This resource was commended by the Scottish Association of Geography Teachers, 2016. Evidence from the 2013 Intergovernmental Panel on Climate Change (IPCC) Report: for A level Geography Teachers Factsheets: 1. 21st Century Challenges. What’s the challenge? 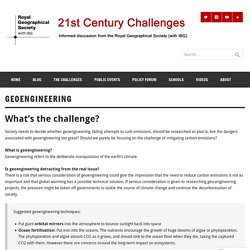 Society needs to decide whether geoengineering, failing attempts to curb emissions, should be researched as plan b. Are the dangers associated with geoengineering too great? Should we purely be focusing on the challenge of mitigating carbon emissions? What is geoengineering? MrC’s Tree carbon content calculator. Where do trees get their mass from? 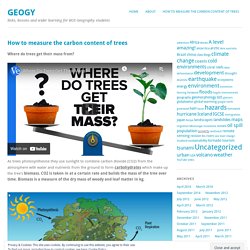 As trees photosynthesise they use sunlight to combine carbon dioxide (CO2) from the atmosphere with water and nutrients from the ground to form carbohydrates which make up the tree’s biomass. CO2 is taken in at a certain rate and builds the mass of the tree over time. Biomass is a measure of the dry mass of woody and leaf matter in kg. The carbon content of a tree is approximately 50% of its biomass (dry mass), though recent studies show this varies a lot between species and locations e.g tropical and boreal. The other 50% is made up of hydrogen, oxygen and nitrogen and other elements. The tree pictured below shows a fallen, dying Sycamore in Priory Park, Reigate. Dead Sycamore tree in Priory Park, Reigate… releasing captured carbon.

Where Do Trees Come From? Forest Carbon 101. Congo basin’s peaty swamps are new front in climate change battle. Stumbling on submerged roots, attacked by bees and wading waist-deep through leech-infested water, the three researchers and their Pygmy guides progress at just 100 metres an hour through the largest and least-explored tropical bog in the world. 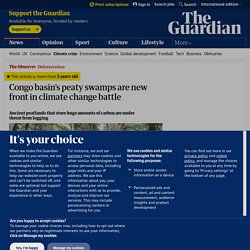 The group halt and unpack what looks like a spear, which is plunged over and over again into the waterlogged forest floor. Each time it brings up a metre-long core of rich, black peat made up of partly decomposed leaves and ancient plantlife. The deepest the steel blade reaches before meeting the underlying clay is 3.7 metres. Leeds University forest ecologists Simon Lewis and Greta Dargie cheer. Lewis and Dargie surprised the world earlier this year when they showed that the peatlands on either side of the Congo river contained one third of all the world’s tropical peat and were five times more extensive than anyone had thought, stretching over 145,500 sq km (56,000 sq miles), an area larger than England.

“We did not know the peat was there. Expansion of agricultural land reduces CO2 absorption. Plants absorb some of the carbon dioxide (CO2) released into the atmosphere by burning fossil fuels. But increasing deforestation and other changes in land use will reduce the CO2 absorption capacity of these areas in the future. This is what a study by climate researchers from Karlsruhe Institute of Technology (KIT) suggests. Their results are now published in Environmental Research Letters. The Amazon effect: how deforestation is starving São Paulo of water. São Paulo could face more devastating water shortages if farmers continue to clear the Amazon forest, warns the utility chief who recently steered the biggest city in the Americas from the edge of drought catastrophe.

Jerson Kelman, president of water company Sabesp, told Guardian Cities he felt a duty to speak out because he was a citizen as well as the head of a company who had seen firsthand how close this metropolis of 21 million people had come to a breakdown. “We should not transform the Amazon into pastureland,” he said in an interview. Water and Carbon Cycles Revision Study Notes for A. SCO WaterandCarbonCycling. Water use and the water cycle - OpenLearn - Open University - S278_12. Coolgeography - Water and Carbon Cycles. A Level Geography Water and Carbon cycles key words. Flashcards. Explainer: what is carbon capture and utilisation? Amazon carbon sink is in decline as trees die off faster. Tropical forests are being exposed to unprecedented environmental change, with huge knock-on effects. Will the Arctic shift from a carbon sink to a carbon source? Deep Earth carbon cycles cracked. Carbon catch-22: the pollution in our soil. Bad behaviour doesn’t usually have good consequences but our fossil fuel and fertiliser habits may have had some “good” environmental side-effects.