Give childhood back to children: if we want our offspring to have happy, productive and moral lives, we must allow more time for play, not less - Comment - Voices. The real problems I’ve faced in life include physical ones (such as how to operate a newfangled machine at work or unblock the toilet at home), social ones (how to get that perfect woman to be interested in me), moral ones (whether to give a passing grade to a student, for effort, though he failed all the tests), and emotional ones (coping with grief when my first wife died or keeping my head when I fell through the ice while pond skating). 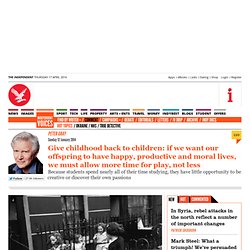 Most problems in life cannot be solved with formulae or memorised answers of the type learnt in school. They require the judgement, wisdom and creative ability that come from life experiences. For children, those experiences are embedded in play. I’m lucky. I grew up in the United States in the 1950s, at the tail end of what the historian Howard Chudacoff refers to as the “golden age” of children’s free play. Educators in East Asian nations have increasingly been acknowledging the massive failure of their educational systems. Loading gallery 1 of 50. Learning, Digital Media and Creative Play in Early Childhood. 3.24.11 | At a small school near Portland, Ore., a typical day for 3-year-old students might involve using digital cameras to photograph their latest block creations and then, with the help of a teacher, uploading the photos to the classroom’s iPad and dictating narratives about their work. 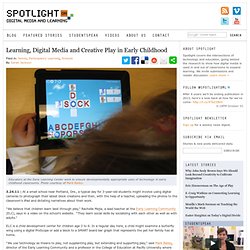 “We believe that children learn best through play,” Rachelle Mejia, a lead teacher at the Early Learning Community (ELC), says in a video on the school’s website. “They learn social skills by socializing with each other as well as with adults.” ELC is a child development center for children age 3 to 6. In a regular day here, a child might examine a butterfly wing using a digital ProScope or add a block to a SMART board bar graph that represents the pet her family has at home. Bailey works to ensure developmentally appropriate uses of technology in these early childhood classrooms. Students working with a digital ProScope. The testing culture, outdoor learning and more: education research in brief. 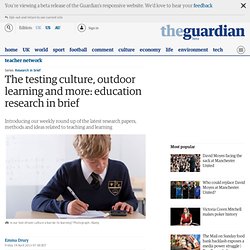 Outdoor learning and play has long been regarded as being a useful tool to help the transition from early years education into the primary setting and something that has been encouraged and endorsed by the Early Years Foundation Stage (EYFS) of the national curriculum. Researchers at Plymouth University followed a groups of 32 pupils in four foundation stage classes who had been armed with digital audio recorders and listened to their conversations and play. Some 15 of the children were then followed into year 1 and in doing this the researchers observed that while two thirds of recordings had happened outdoors during EYFS, in year 1 that proportion dropped to less than one third.

Domestic violence education in secondary schools. Play in education: the role and importance of creative learning. Here we've collated some highlights and links from our recent live chat exploring the benefits and challenges associated with learning through play. 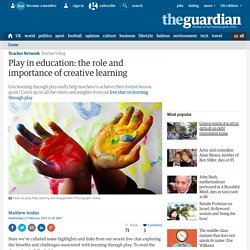 Why%20children%20need%20to%20play. SERIOUSLY! A movie about PLAY! - Trailer (4 min.) Tracing the development of play in Scotland. 24 September 2012Last updated at 07:18 ET By Gillian Sharpe BBC Scotland News Play Scotland said there should be a legal right to play An ideal childhood is generally considered to be a carefree one, full of play. 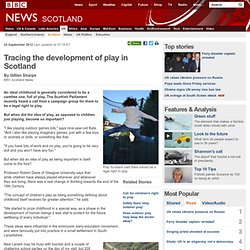 The Scottish Parliament recently heard a call from a campaign group for there to be a legal right to play. But when did the idea of play, as opposed to children just playing, become so important? "I like playing outdoor games lots," says nine-year-old Kate. "If you have lots of work and no play, you're going to be very dull and you won't have any fun. " Remembering to Play - Home. ‘Life in every limb’: Early Education Conference. Children want space at all ages. 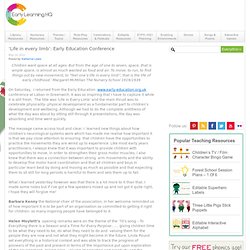 But from the age of one to seven, space, that is ample space, is almost as much wanted as food and air. To move, to run, to find things out by new movement, to “feel one’s life in every limb”, that is the life of early childhood.’ Margaret McMillan The Nursery School 1919/1939 On Saturday, I returned from the Early Education www.early-education.org.uk conference at Laban in Greenwich. It was so inspiring that I have to capture it while it is still fresh. The message came across loud and clear. What I learned yesterday however was that there is a lot more to it than that. Barbara Kenny the National chair of the association, in her welcome reminded us of how important it is to be part of an organisation so committed to getting it right for children- so many inspiring people have belonged to it. Sweden -Not having enough space outdoors Spain- Not having enough family time UK- Not enough consumer goods. Sally advocates: The link below will be of interest: 3) Wait! 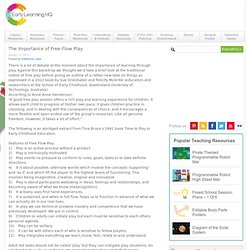 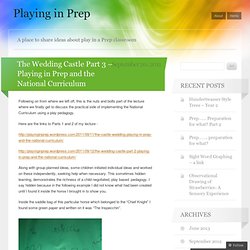 Here are the links to Parts 1 and 2 of my lecture - Along with group planned ideas, some children initiated individual ideas and worked on these independently, seeking help when necessary. This sometimes hidden learning, demonstrates the richness of a child negotiated, play based pedagogy. I say hidden because in the following example I did not know what had been created until I found it inside the horse I brought in to show you. Inside the saddle bag of this particular horse which belonged to the “Chief Knight” I found some green paper and written on it was “The Inspecchin”. Computer based play. Play as investment. When you get a new gadget what do you do? A phone, a camera, a games console, the first instinct is to play, to explore without focus, to ‘loose some time’ with it. It’s never a case of ‘loosing time’, the time you spend playing around with something new and experimenting shapes the way you use once you settle into the day to day.

Think about that smart phone, or camera, or piece of software, how many of the workflows you follow when using it were shaped in that initial period of ‘playing’? I’d be willing to bet most of them were. Because Play Matters - Blog. PLaying and learning with new technologies. Applications are now accepted for two full-time 3 year PhD studentships. 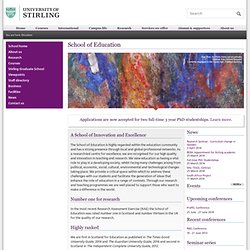 Learn more. A School of Innovation and Excellence The School of Education is highly regarded within the education community and has a strong presence through local and global professional networks. As a research-led centre for excellence, we are recognised for our high quality and innovation in teaching and research. We view education as having a vital role to play in a developing society, whilst facing many challenges arising from political, economic, social, cultural, environmental and technological changes taking place.

Number one for research. Games Based Learning? Marc. The Strong. The Strong® is a highly interactive museum devoted to the history and exploration of play. 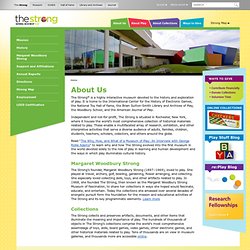 It is home to the International Center for the History of Electronic Games, the National Toy Hall of Fame, the Brian Sutton-Smith Library and Archives of Play, the Woodbury School, and the American Journal of Play. Independent and not-for-profit, The Strong is situated in Rochester, New York, where it houses the world’s most comprehensive collection of historical materials related to play. These enable a multifaceted array of research, exhibition, and other interpretive activities that serve a diverse audience of adults, families, children, students, teachers, scholars, collectors, and others around the globe.

Play in the National curriuclum. Importance of outdoor play for young children. Everyone who works with young children in early childhood programmes and schools knows how quickly bacteria and viruses spread in these environments. One way to reduce the spread of infection is through lots and lots of fresh air. Outdoor play enables the infectious agents to spread out and be dissipated; it also enables children to get fresh air and exercise and be less constrained than they are in the classroom (Aronson, 2002). Outdoor play also enables children to enjoy the natural environment and learn to seek out exercise, fresh air, and activity. There is something fundamentally healthy about using the outdoors.

Theories About Play in Early Childhood Education. Maria Montessori, an Italian educationist during the early 1900s, postulated that "play is the child's work. " According to the Montessori method, which is still employed today in private schools, children would be best served spending their play time learning or imagining. Montessori play is sensory, using a hands-on approach to everyday tools like sand tables. Play - a historical perspective. “Play: The voluntary activity pursued without ulterior purpose and, on the whole, with enjoyment or expectation of enjoyment” (English and English, 1958). Early theorists, as well as those of the present day, have been fascinated by the way children play. How does a child learn social interaction with his peers?