US exempts India, China from Iranian sanctions. US Secretary of State John Kerry "I am pleased to announce that based on additional significant reductions in the volume of their purchases of Iranian crude oil, China, India, the Republic of Korea, Turkey, and Taiwan have again qualified for an exception to sanctions (under) the National Defence Authorization Act (NDAA) for Fiscal Year 2012," Secretary of State John Kerry said in a statement on Friday. 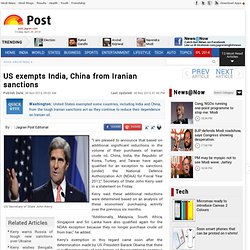 Kerry said these additional reductions were determined based on an analysis of these economies' purchasing activity over the previous six months. “Additionally, Malaysia, South Africa, Singapore and Sri Lanka have also qualified again for the NDAA exception because they no longer purchase crude oil from Iran,” he added. Kerry's exemption in this regard came soon after the determination made by US President Barack Obama that there is sufficient supply of non-Iranian oil for countries to continue to reduce import of oil from Iran.

FOFA. Shield Law Moves Forward, Defines Journalism So That It Leaves Out Wikileaks & Random Bloggers. UK Spies Knew That Its Surveillance Was Likely Illegal, Which Is Why They Fought To Keep It So Secret. The latest reporting on the Snowden docs by The Guardian shows that the UK's surveillance operation GCHQ was apparently well aware that its activities were almost certainly open to a "legal challenge" and therefore they were committed to keeping them secret to avoid such a challenge. 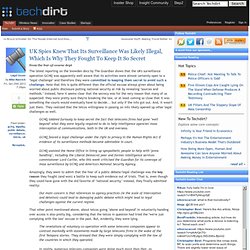 Note that this is quite different than the official excuse always given about being worried about public disclosure putting national security at risk by revealing "sources and methods. " 'Team Sport' Is The NSA's Buzzword For Getting Companies To Violate Your Privacy. I noticed something interesting in two of our recent stories about NSA surveillance. 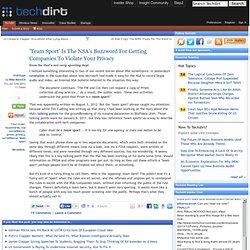 In yesterday's revelation in the Guardian about how Microsoft had made it easy for the NSA to record Skype audio and video, an internal NSA bulletin referred to the situation this way: The document continues: "The FBI and CIA then can request a copy of Prism collection of any selector…" As a result, the author notes: "these two activities underscore the point that Prism is a team sport! " Mo. moves to lift ban on foreign farm ownership. Krauthammer's Take: DNI Clapper, 'Give Me A Break'

Citigroup lobbyists help write bill to deregulate Wall Street. Pay to play. Pay to play, sometimes pay for play, is a phrase used for a variety of situations in which money is exchanged for services or the privilege to engage (play) in certain activities. 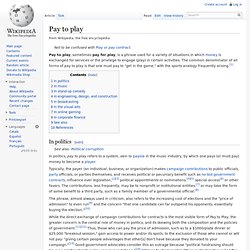 The common denominator of all forms of pay to play is that one must pay to "get in the game," with the sports analogy frequently arising.[1] In politics[edit] Typically, the payer (an individual, business, or organization) makes campaign contributions to public officials, party officials, or parties themselves, and receives political or pecuniary benefit such as no-bid government contracts, influence over legislation,[2][3] political appointments or nominations,[4][5] special access[6] or other favors.

The contributions, less frequently, may be to nonprofit or institutional entities,[7] or may take the form of some benefit to a third party, such as a family member of a governmental official.[8] In music[edit] In stand-up comedy[edit] Some Republicans Think They Can’t Lose on Sequestration. President Obama has been barnstorming across the country warning that if automatic, across-the-board spending cuts are allowed to take effect Friday, economic calamity would not be far behind. 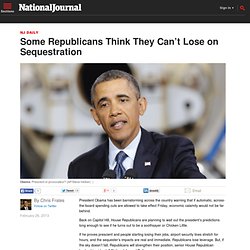 Back on Capitol Hill, House Republicans are planning to wait out the president’s predictions long enough to see if he turns out to be a soothsayer or Chicken Little. If he proves prescient and people starting losing their jobs, airport security lines stretch for hours, and the sequester’s impacts are real and immediate, Republicans lose leverage. But, if the sky doesn’t fall, Republicans will strengthen their position, senior House Republican leadership aides tell National Journal Daily. U.S. Spending Cuts Will Harm Poor, Warns Catholic Agency Eurasia Review. By CNA By Adelaide Darling If members of Congress do not come to an agreement on a debt reduction proposal, the resulting spending cuts may threaten the lives of those in poverty, cautioned Catholic Relief Services. 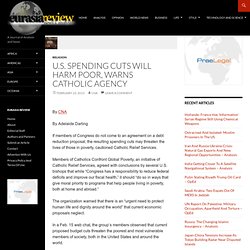 Members of Catholics Confront Global Poverty, an initiative of Catholic Relief Services, agreed with conclusions by several U.S. bishops that while “Congress has a responsibility to reduce federal deficits and improve our fiscal health,” it should “do so in ways that give moral priority to programs that help people living in poverty, both at home and abroad.” Sequester cuts are here to stay - The Hill. Matt Miller: A Washington brain drain on the sequester. Even if Republicans grumbled at first (and secretly prayed for the economy to tank), they would in short order have supported those new tax cuts. 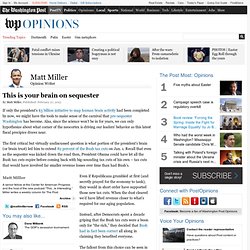 When the dust cleared we’d have lifted revenue closer to what’s required for our aging population. Instead, after Democrats spent a decade griping that the Bush tax cuts were a boon only for “the rich,” they decided that Bush had in fact been correct all along in claiming they benefited everyone. The fallout from this choice can be seen in two facts that decisively shape the current moment.

First, revenue was left far below what will be needed as the boomers retire. George Will: The Fed’s not-so-golden rule. Sequestration impacts, state by state estimates from the White House.