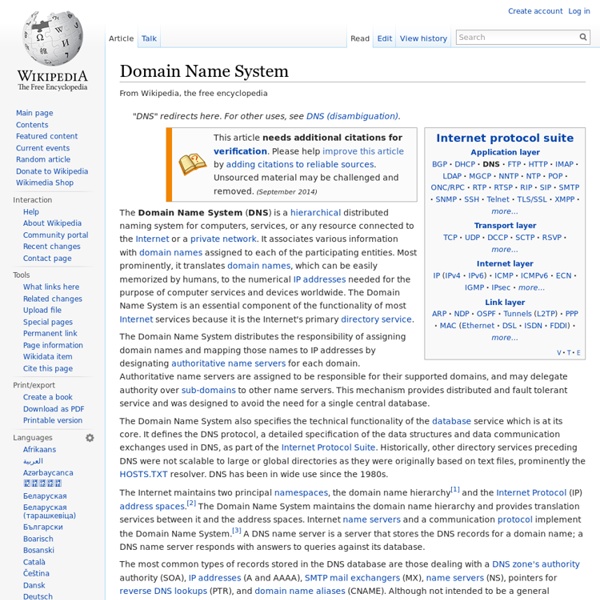 The Domain Name System (DNS) is a hierarchical distributed naming system for computers, services, or any resource connected to the Internet or a private network. It associates various information with domain names assigned to each of the participating entities. Most prominently, it translates domain names, which can be easily memorized by humans, to the numerical IP addresses needed for the purpose of computer services and devices worldwide. The Domain Name System is an essential component of the functionality of most Internet services because it is the Internet's primary directory service. The Domain Name System distributes the responsibility of assigning domain names and mapping those names to IP addresses by designating authoritative name servers for each domain. The Domain Name System also specifies the technical functionality of the database service which is at its core. Function[edit] History[edit] Structure [edit] Domain name space[edit] Domain name syntax[edit] Name servers[edit]

Transmission Control Protocol Web browsers use TCP when they connect to servers on the World Wide Web, and it is used to deliver email and transfer files from one location to another. HTTP, HTTPS, SMTP, POP3, IMAP, SSH, FTP, Telnet and a variety of other protocols are typically encapsulated in TCP. Historical origin[edit] In May 1974 the Institute of Electrical and Electronic Engineers (IEEE) published a paper titled "A Protocol for Packet Network Intercommunication Network function[edit] The protocol corresponds to the transport layer of TCP/IP suite. TCP is utilized extensively by many of the Internet's most popular applications, including the World Wide Web (WWW), E-mail, File Transfer Protocol, Secure Shell, peer-to-peer file sharing, and some streaming media applications. TCP is optimized for accurate delivery rather than timely delivery, and therefore, TCP sometimes incurs relatively long delays (on the order of seconds) while waiting for out-of-order messages or retransmissions of lost messages. Reserved (3 bits)

Joris Luyendijk: 'The old model of journalism is broken' | Media Video: Dutch journalist Joris Luyendijk on how the news agenda defines our views of different countries – and how to stop sustainability seeming boring Link to video: 'Journalism is about exceptions to the rule, what is different, what is spectacular' Many journalists have mid-life crises when they begin to doubt their capacity to capture the truth in words or escape the media echo chamber. Joris Luyendijk had his crisis early – when he was 31, to be precise. He was Middle East correspondent for the Dutch newspaper NRC Handelsblad, was widely admired, had just covered the Gulf war . . . and he packed it all in to write a book. That book, published in the Netherlands in 2006 and in the UK last year with the title Hello Everybody! Hello Everybody! "What will you have? His main focus over the last couple of years, however, has not been the book, but an attempt to develop a new way of doing journalism. Luyendijk says "the old model of journalism is broken" – but so what?

File:Domain name space.svg Summary[edit] A diagram of Domain Name System. Sets of resource records at each node in a tree. Zoom in explanation on zone delegation.. Other versions[edit] Licensing[edit] derivative works[edit] Derivative works of this file: Click on a date/time to view the file as it appeared at that time. The following other wikis use this file:

Van Jacobson Van Jacobson in January 2006 Van Jacobson (born 1950) is an American computer scientist, renowned for his work on TCP/IP network performance and scaling.[1] He is one of the primary contributors to the TCP/IP protocol stack—the technological foundation of today’s Internet.[2] Starting in 1985 he was an adjunct lecturer in Computer Science at the University of California, Berkeley. Early life and education[edit] Jacobson studied Modern Poetry, Physics, and Mathematics and received an M.S. in physics and a B.S. in mathematics from the University of Arizona.[3] He did graduate work at Lawrence Berkeley Laboratory.[4] Career[edit] He is the co-author of several widely used network diagnostic tools, including traceroute, tcpdump, and pathchar. Awards and memberships[edit] In 2012, Jacobson was inducted into the Internet Hall of Fame by the Internet Society.[20] References[edit] External links[edit]

zunguzungu Julian Assange and the Computer Conspiracy; “To destroy this invisible government” (en Español) (auf Deutsch) (in het nederlands) “To radically shift regime behavior we must think clearly and boldly for if we have learned anything, it is that regimes do not want to be changed. The piece of writing (via) which that quote introduces is intellectually substantial, but not all that difficult to read, so you might as well take a look at it yourself. He begins by positing that conspiracy and authoritarianism go hand in hand, arguing that since authoritarianism produces resistance to itself — to the extent that its authoritarianism becomes generally known — it can only continue to exist and function by preventing its intentions (the authorship of its authority?) Authoritarian regimes give rise to forces which oppose them by pushing against the individual and collective will to freedom, truth and self realization. His model for imagining the conspiracy, then, is not at all the cliché that people mean when they sneer at someone for being a “conspiracy theorist.” Like this:

Internationalized domain name An internationalized domain name (IDN) is an Internet domain name that contains at least one label that is displayed in software applications, in whole or in part, in a language-specific script or alphabet, such as Arabic, Chinese, Russian, Tamil or the Latin alphabet-based characters with diacritics, such as French. These writing systems are encoded by computers in multi-byte Unicode. Internationalized domain names are stored in the Domain Name System as ASCII strings using Punycode transcription. The Domain Name System, which performs a lookup service to translate user-friendly names into network addresses for locating Internet resources, is restricted in practice[1] to the use of ASCII characters, a practical limitation that initially set the standard for acceptable domain names. IDN was originally proposed in December 1996 by Martin Dürst[2][3] and implemented in 1998 by Tan Juay Kwang and Leong Kok Yong under the guidance of Tan Tin Wee. ToASCII and ToUnicode[edit] Timeline[edit]

One ambassador’s embarrassment is a tragedy, 15,000 civilian deaths is a statistic Few things illustrate the challenges facing journalism in the age of ‘Big Data’ better than Cable Gate – and specifically, how you engage people with stories that involve large sets of data. The Cable Gate leaks have been of a different order to the Afghanistan and Iraq war logs. Not in number (there were 90,000 documents in the Afghanistan war logs and over 390,000 in the Iraq logs; the Cable Gate documents number around 250,000) – but in subject matter. Why is it that the 15,000 extra civilian deaths estimated to have been revealed by the Iraq war logs did not move the US authorities to shut down Wikileaks’ hosting and PayPal accounts? Tragedy or statistic? I once heard a journalist trying to put the number ‘£13 billion’ into context by saying: “imagine 13 million people paying £1,000 more per year” – as if imagining 13 million people was somehow easier than imagining £13bn. Research suggests this is a problem that not only affects journalism, but justice as well. Salience He is right.

What is Start of Authority? Webopedia Definition Main » TERM » S » Abbreviated SOA, a type of resource record that is used by the Domain Name System (DNS). Every domain name has an SOA record in its database that indicates basic properties of the domain and the zone that the domain is in. The SOA record contains: The host name for the primary name server for the zone. An e-mail address of the person who is responsible for the domain. The serial number for the zone. Leonard Kleinrock Leonard Kleinrock (born June 13, 1934) is an American engineer and computer scientist. A computer science professor at UCLA's Henry Samueli School of Engineering and Applied Science, he made several important contributions to the field of computer networking, in particular to the theoretical side of computer networking. He also played an important role in the development of the ARPANET, the precursor to the Internet, at UCLA.[3] His most well-known and significant work is his early work on queueing theory, which has applications in many fields, among them as a key mathematical background to packet switching, one of the basic technologies behind the Internet. His initial contribution to this field was his doctoral thesis at the Massachusetts Institute of Technology in 1962, published in book form in 1964; he later published several of the standard works on the subject. He described this work as: Education and career[edit] ARPANET and the Internet[edit] Awards[edit] See also[edit] Works[edit]