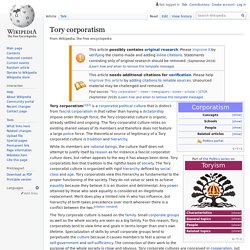 The Tory corporatist culture relies on existing shared values of its members and therefore does not feature a large police force. High Tory. Traditionalist conservatism, primarily in UK High Toryism has been described by Andrew Heywood as neo-feudalist[1] in its preference for a traditional hierarchical society over utopian equality, as well for holding the traditional gentry as a higher cultural benchmark than the bourgeoisie and those who have attained their position through commerce or labour. 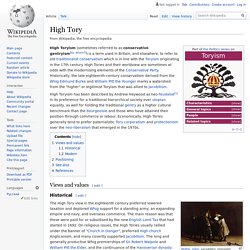 Economically, High Tories generally tend to prefer paternalistic Tory corporatism and protectionism over the neo-liberalism that emerged in the 1970s. Views and values[edit] Monarchism. Advocacy of a monarch or monarchical rule Monarchism is the advocacy of monarchy or monarchical rule.[1] A monarchist is an individual who supports this form of government, independent of any specific monarch; one who espouses a particular monarch is a royalist. 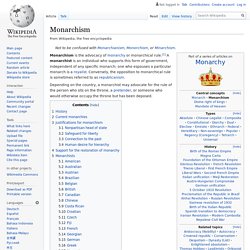 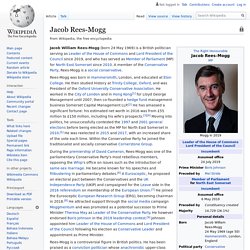 He then studied History at Trinity College, Oxford, and was President of the Oxford University Conservative Association. He worked in the City of London and in Hong Kong[1] for Lloyd George Management until 2007, then co-founded a hedge fund management business Somerset Capital Management LLP.[2] He has amassed a significant fortune: his estimated net worth in 2016 was from £55 million to £150 million, including his wife's prospects.[3][4] Moving into politics, he unsuccessfully contested the 1997 and 2001 general elections before being elected as the MP for North East Somerset in 2010.[5] He was reelected in 2015 and 2017, with an increased share of the vote each time.

Mark Colvin. Biography[edit] Career as a journalist and broadcaster[edit] In 1994, Colvin was deployed by the 7.30 Report to Africa to cover the unfolding tragedy in Rwanda. 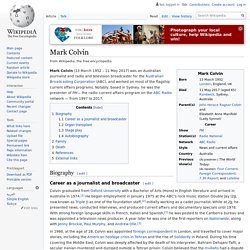 Travelling via Zaire, he witnessed an extensive human tragedy, in which about a million refugees were living in camps with poor sanitation and hygiene, with cholera and dysentery commonplace. UK Independence Party. British political party UKIP originated as the Anti-Federalist League, a single-issue Eurosceptic party established in London by Alan Sked in 1991. 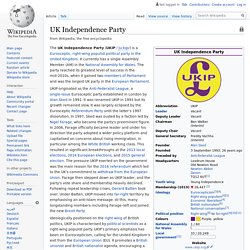 It was renamed UKIP in 1993 but its growth remained slow. Brexit: The Uncivil War. 2019 film starring Benedict Cumberbatch Plot[edit] The film contrasts the progress of the two campaigns. 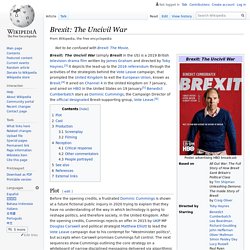 Cummings, using the AggregateIQ database, brings MP Douglas Carswell to Jaywick, a part of his constituency he did not know existed, where a couple articulate the destitution of their position.[7] Oliver, using the traditional focus-groups, and in a memorable scene, realises that his campaign has failed to understand the concerns of all UK voters, as a focus-group descends into a mass quarrel and a member breaks down crying "I’m sick of feeling like nothing, like I have nothing! Like I know nothing. Dominic Cummings. British political strategist for Boris Johnson From 2007 to 2014, he was a Special Adviser to Michael Gove, including while the latter served as Secretary of State for Education, before he was dismissed by Prime Minister David Cameron. 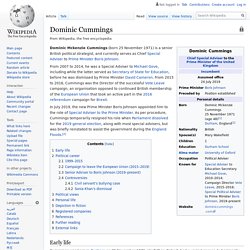 From 2015 to 2016, Cummings was the Director of the successful Vote Leave campaign, an organisation opposed to continued British membership of the European Union that took an active part in the 2016 referendum campaign for Brexit. Early life After attending state primary school, he was educated at Durham School and Exeter College, Oxford, where he studied under Norman Stone,[5] graduating in 1994 with a First in Ancient and Modern History.[6] One of his professors has described him as "fizzing with ideas, unconvinced by any received set of views about anything". Nazir Ahmed, Baron Ahmed. Nazir Ahmed, Baron Ahmed (born 24 April 1957) is a member of the House of Lords of the United Kingdom. 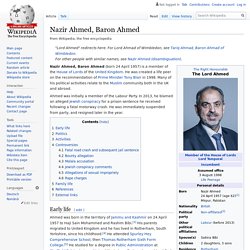 He was created a life peer on the recommendation of Prime Minister Tony Blair in 1998. Many of his political activities relate to the Muslim community both in the UK and abroad. Anthony Eden. Former Prime Minister of the United Kingdom Garter-encircled arms of Anthony Eden, 1st Earl of Avon, KG – Gules on a chevron between three garbs or, banded vert, as many escallops sable. 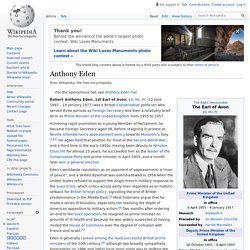 Eden is generally ranked among the least successful British prime ministers of the 20th century,[6] although two broadly sympathetic biographies (in 1986 and 2003) have gone some way to shifting the balance of opinion.[7] Biographer D. R. Boris Johnson Might Break Up the U.K. That’s a Good Thing. Freed from the grip of the decayed British nation and British state, England could finally be done with its delusions of grandeur. Fanciful beliefs about British importance in the world would crumble. England would be only around the eighth-largest economy in the world. And it would probably have to give up its nuclear weapons — the United Kingdom’s nuclear submarine base is in Scotland. England need not be, as many fear, a rump United Kingdom, parochial, perhaps even irredentist.

Piers Morgan. While working at Daily Mirror, he was in charge during the period that the paper was implicated in the phone hacking scandal. In 2011, Morgan denied having ever hacked a phone or "to my knowledge published any story obtained from the hacking of a phone". Darren Grimes. Darren Grimes in Israel in February 2019 Darren Grimes is a British political commentator and activist. He works as the digital manager for free market think tank, the Institute of Economic Affairs since 2018.[1] Life[edit] Daily Mail. British daily middle-market tabloid newspaper published in London The paper is owned by the Daily Mail and General Trust.[6] Jonathan Harmsworth, 4th Viscount Rothermere, a great-grandson of one of the original co-founders, is the current chairman and controlling shareholder of the Daily Mail and General Trust, while day-to-day editorial decisions for the newspaper are usually made by a team led by the editor, Geordie Greig, who succeeded Paul Dacre in September 2018.[7] The Daily Mail has been widely criticised for its unreliability, as well as printing of sensationalist and inaccurate scare stories of science and medical research,[13][14][15][16][17] and for copyright violations.[18] The Daily Mail has won a number of awards, including receiving the National Newspaper of the Year award from the British Press Awards seven times since 1995.

Privacy commissioner Daniel Therrien and B.C. privacy commissioner Michael McEvoy released the result on Tuesday of their joint probe into AggregateIQ (AIQ)​, the Victoria, B.C. Tory plan to increase pension age to 75 ‘chilling and immoral’ Proposals to increase the state pension age to 75 have been branded “chilling and immoral” by former pensions minister Ros Altmann. Baroness Altmann condemned the idea put forward by Tory think-tank the Centre for Social Justice (CSJ) this week to raise the current pension age of 65 to 70 by 2028 and 75 by 2035. General election: Anger as Boris Johnson refuses to attend his own constituency hustings.

Jeremy Corbyn is attacked because he is Anti-Capitalist, not Anti-Semitic. The Guardian view on Boris Johnson’s poverty plan: spread it widely?