+ Advances Made in Mega Freeform Construction. The potential of large-scale freeform construction is to build a full-scale house in a day at a fraction of today's cost. 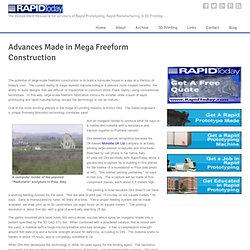 The current reality of mega layered manufacturing is it delivers more modest benefits: the ability to build designs that are difficult or impossible to construct (think Frank Gehry) using conventional techniques. In this way, large-scale freeform fabrication mimics its smaller, older cousin of rapid prototyping and rapid manufacturing, except the technology is not as mature. One of the more exciting players in the mega 3D printing industry is Enrico Dini. 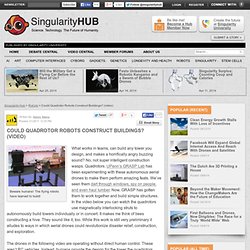 The flying robots have learned to build! What works in teams, can build any tower you design, and makes a horrifically angry buzzing sound? No, not super intelligent construction wasps. Quadrotors. UPenn’s GRASP Lab has been experimenting with these autonomous aerial drones to make them perform amazing feats. The drones in the following video are operating without direct human control. MIT’s Tangible Media Group Gives Digital Bits Physical Form. MIT’s Daniel Leithinger sits in front of a screen displaying video of a red ball on a table. 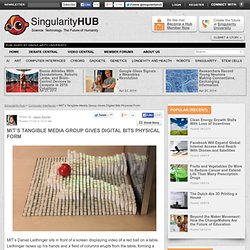 Leithinger raises up his hands and a field of columns erupts from the table, forming a pixellated physical model of his hands in real time. Leithinger’s hands have been digitally transported from one room to another and physically re-manifested using a “tangible user interface.” He can pass the ball from one hand to the other or manipulate objects without being physically present. Leithinger built the system, called inFORM, with fellow Ph.D. candidate and graduate research assistant, Sean Follmer, and Professor Hiroshi Ishii, head of MIT’s Tangible Media Group. The team hopes their invention and others like it will augment graphical user interfaces, like screens, by giving physical 3D form to bits of data.

Spooky action at a distance. The inFORM interface is composed of 900 polystyrene pins. But inFORM isn’t ready for the rest of us just yet. + Contour crafting. Contour crafting is a building printing technology being researched by Behrokh Khoshnevis of the University of Southern California's Information Sciences Institute (in the Viterbi School of Engineering) that uses a computer-controlled crane or gantry to build edifices rapidly and efficiently with substantially less manual labor. 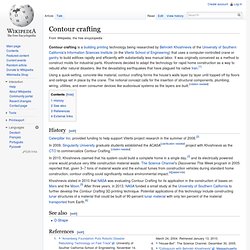 It was originally conceived as a method to construct molds for industrial parts. Khoshnevis decided to adapt the technology for rapid home construction as a way to rebuild after natural disasters, like the devastating earthquakes that have plagued his native Iran.[1] Using a quick-setting, concrete-like material, contour crafting forms the house's walls layer by layer until topped off by floors and ceilings set in place by the crane. The notional concept calls for the insertion of structural components, plumbing, wiring, utilities, and even consumer devices like audiovisual systems as the layers are built. + * Researchers Are Making A 3D Printer That Can Build A House In 24 Hours. At The University of Southern California, Professor Behrokh Khoshnevis has built a colossal 3D printer that can build a house in 24 hours. 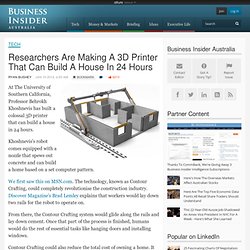 Khoshnevis’s robot comes equipped with a nozzle that spews out concrete and can build a home based on a set computer pattern. We first saw this on MSN.com. The technology, known as Contour Crafting, could completely revolutionise the construction industry. Discover Magazine’s Brad Lemley explains that workers would lay down two rails for the robot to operate on. From there, the Contour Crafting system would glide along the rails and lay down cement. + * Caterpillar Inc. Funds Viterbi 'Print-a-House' Construction Technology. Eric Mankin August 28, 2008 — Caterpillar, the world's largest manufacturer of construction equipment, is starting to support research on the "Contour Crafting" automated construction system that its creator believes will one day be able to build full-scale houses in hours. + 3D Printed Homes? Here?s The Scoop. Will 3D printers construct your next house? 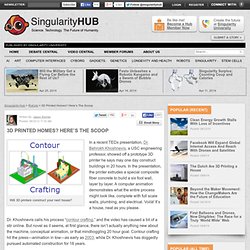 In a recent TEDx presentation, Dr. Behrokh Khoshnevis, a USC engineering professor, showed off a prototype 3D printer he says may one day construct buildings in 20 hours. In the presentation, the printer extrudes a special composite fiber concrete to build a six foot wall, layer by layer. A computer animation demonstrates what the entire process might look like, complete with full scale walls, plumbing, and electrical. + Behrokh Khoshnevis. Behrokh Khoshnevis is a professor of Industrial & Systems Engineering and is the Director of Manufacturing Engineering Graduate Program at the University of Southern California (USC). 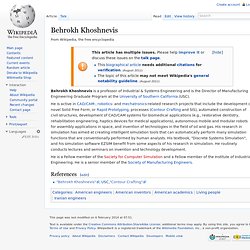 He is active in CAD/CAM-, robotics- and mechatronics-related research projects that include the development of novel Solid Free Form, or Rapid Prototyping, processes (Contour Crafting and SIS), automated construction of civil structures, development of CAD/CAM systems for biomedical applications (e.g., restorative dentistry, rehabilitation engineering, haptics devices for medical applications), autonomous mobile and modular robots for assembly applications in space, and invention of technologies in the field of oil and gas. + Contour Crafting - CC. - All About Green Building Materials. The materials used in the construction of an eco-house are key to its green credentials. 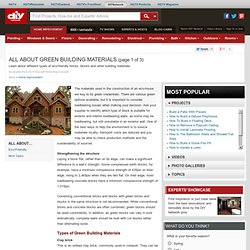 There are various green options available, but it is important to consider loadbearing issues when making your decision. Ask your supplier to identify which type of block is suitable for exterior and interior loadbearing walls, as some may be loadbearing, but still unsuitable in an exterior wall. One of the best ways to help the environment is to source materials locally; transport costs are reduced and you may be able to check production methods and the sustainability of sources. + Build your own 3D-printed home. The British housing sector is in a crisis. 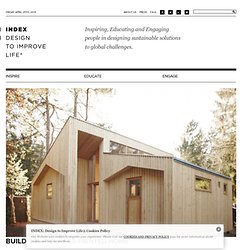 Not only have house prices in the cities risen by 53% since this time four years ago, but worryingly a report by the Independent Institute for Public Policy Research stipulates that there will be a shortfall of 750,000 homes across the country by 2025. How can we meet the demand for cheap, swiftly built housing? - Facit Homes. + Fab lab. A fab lab (fabrication laboratory) is a small-scale workshop offering (personal) digital fabrication.[1][2] A fab lab is generally equipped with an array of flexible computer controlled tools that cover several different length scales and various materials, with the aim to make "almost anything".[3] This includes technology-enabled products generally perceived as limited to mass production. 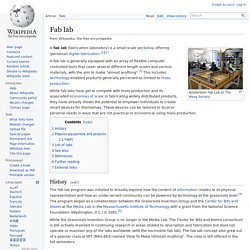 While fab labs have yet to compete with mass production and its associated economies of scale in fabricating widely distributed products, they have already shown the potential to empower individuals to create smart devices for themselves. These devices can be tailored to local or personal needs in ways that are not practical or economical using mass production. History[edit] Popular equipment and projects[edit] + Home - International Fab Lab Association. + Digital modeling and fabrication. Digital modeling and fabrication is a process that joins design with the Construction / Production through the use of 3D modeling software and additive and subtractive manufacturing processes.

These tools allow designers to produce digital materiality, which is something greater than an image on screen, and actually tests the accuracy of the software and computer lines. Computer milling and fabrication integrate the computer assisted designs with that of the construction industry. In this process, the sequence of operations becomes the critical characteristic in procedure. Architects can propose complex surfaces, where the properties of materials should push the design. Modeling[edit] Digitally fabricated objects are created with a variety of CAD software packages, using both 2D vector drawing, and 3D modeling.