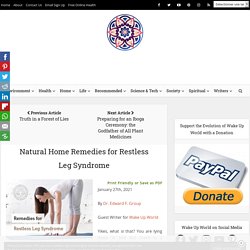 Note that restless leg syndrome is not just when you occasionally get tingly legs, but when it occurs on a regular, frequent basis. 1. 2. 3. 4. 5. Iron Vitamin D 6. Neurological channelopathies: new insights into disease mechanisms and ion channel function - Kullmann - 2010 - The Journal of Physiology - Wiley Online Library. Neurological channelopathies in 2010: a snapshot Although the term ‘channelopathy’ was coined less than 20 years ago, inherited mutations of ion channels are now recognised to affect a wide range of organs and to represent a substantial disease burden. 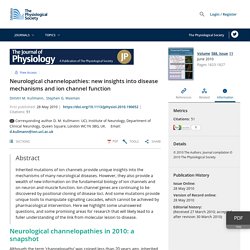 An increasing number of neurological channelopathies have been identified and characterized, and have begun to teach us important lessons about the molecules and cellular processes that underlie electrical excitability and disorders of excitability. This Special Issue of The Journal of Physiology presents reviews of recent research in muscle, nerve and brain channelopathies, focusing on areas where there have been particularly important advances. In introducing this Special Issue, rather than providing a systematic review of the history of channelopathy research, we highlight some of the emerging principles, and point to especially promising areas of research for the next decade. 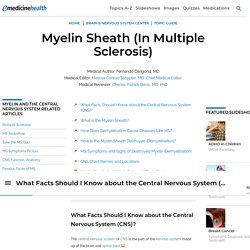 The central nervous system or CNS is the part of the nervous system made up of the brain and spinal cord. The brain controls most bodily functions, such as voluntary movements, perception of sensations, memory, awareness, and thoughts.The cerebrum controls voluntary actions, speech, thought, and memory. The cortex, also called gray matter, is the outer part of the cerebrum and is made of neurons (nerve cells). Most of the brain's information processing is done in the cortex.The brain is divided into two halves: the right hemisphere and the left hemisphere. These hemispheres lie on a central structure called the thalamus, which relays information between the peripheral input from the senses and the brain. What Is the Myelin Sheath?

Myelin is a fatty material that coats, protects, and insulates nerves, enabling them to quickly conduct impulses between the brain and different parts of the body. CNS Chart Names and Locations 1. How to know if you have a nerve problem. Naturally Repairing Nerve Damage. Diaphragmatic Breathing - Essential to Yoga Meditation. Diaphragmatic Breathing by Swami Jnaneshvara Bharati SwamiJ.com See also: 20 Breathing practices and pranayama Online breathing practices Online Soham breath practice Online Soham with trataka/gazing The diaphragm is a huge muscle that rests horizontally across the base of the rib cage. 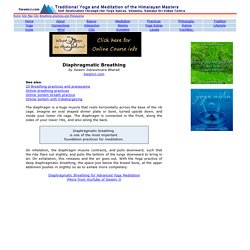 Imagine an oval shaped dinner plate or bowl, turned upside down, and inside your lower rib cage. The diaphragm is connected in the front, along the sides of your lower ribs, and also along the back. On inhalation, the diaphragm muscle contracts, and pulls downward, such that the ribs flare out slightly, and pulls the bottom of the lungs downward to bring in air. Diaphragmatic Breathing for Advanced Yoga Meditation (More from YouTube of Swami J) When the diaphragm muscle contracts, it pulls the bottom of the lungs downward, causing them to fill, while the ribs flare outward to the sides. (Be sure to scroll down to see the photos.) We need to consciously practice diaphragmatic breathing. Figure 1 Figure 2. How to Heal the "Vagus Nerve" to Heal Your Mind & Body. FYI: What Causes Muscle Twitches? Peripheral Neuropathy. How To Treat Peripheral Neuropathy Successfully.