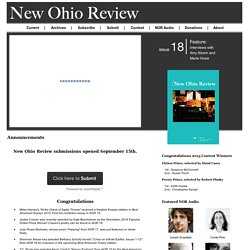 Congratulations Miles Harvey's "At the Grave of Sadie Thorpe" received a Notable Essays citation in Best American Essays 2015. Find his nonfiction essay in NOR 15. Jackie Craven was recently selected by Kate Bernheimer as the Omnidawn 2014 Fabulist Fiction Prize Winner! Craven's poetry can be found in NOR 18. So I'm learning to squeeze a little discipline From the porous emotions, though they're prone to go berserk, Like weasels on a trapeze. Elton Glaser, “Aftermath in Brine” from Issue 15. StoryQuarterly: The Literary Magazine at Rutgers–Camden. Callaloo.tamu.edu. Welcome to DailyLit. Joyland Magazine. The Normal School. Commentary Magazine. 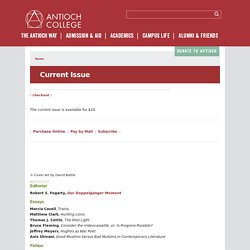 American Poetry Review – Home. Barrow Street. This is A Public Space. BOMB Magazine. An Error Occurred Setting Your User Cookie. The Missouri Review. Stories, Poems, Essays, and Reviews since 1926. Glimmer Train Press. Volt. The Magazine of UNLV's Black Mountain Institute. THE LITERARY JOURNAL OF THE UNIVERSITY OF FLORIDA. The American Scholar, the magazine of the Phi Beta Kappa Society. AGNI Submission Manager. Crazyhorse. The Hudson Review. TriQuarterly. The Magazine of New Writing. GR Home. New England Review – The Threepenny Review. Five Points - A Journal of Literature and Art. Home. The International Journal of Literature, Culture and the Arts. Harper's Magazine. Ploughshares. Ploughshares is an American literary magazine established in 1971 by DeWitt Henry and Peter O'Malley in The Plough and Stars, an Irish pub in Cambridge, Massachusetts. 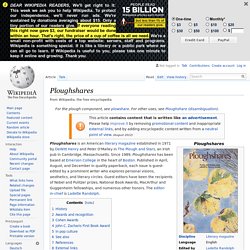 Since 1989, Ploughshares has been based at Emerson College in the heart of Boston. Published in April, August, and December in quality paperback, each issue is guest-edited by a prominent writer who explores personal visions, aesthetics, and literary circles. Guest editors have been the recipients of Nobel and Pulitzer prizes, National Book Awards, MacArthur and Guggenheim fellowships, and numerous other honors. The editor-in-chief is Ladette Randolph. History[edit] In 1970 DeWitt Henry, a Harvard Ph.D. student, and Peter O'Malley, an Irish expatriate, joined together at the Plough and Stars pub to fill a void they felt existed in the literary scene in Boston. In 2008, Ladette Randolph replaced Don Lee as Editor-in-Chief.