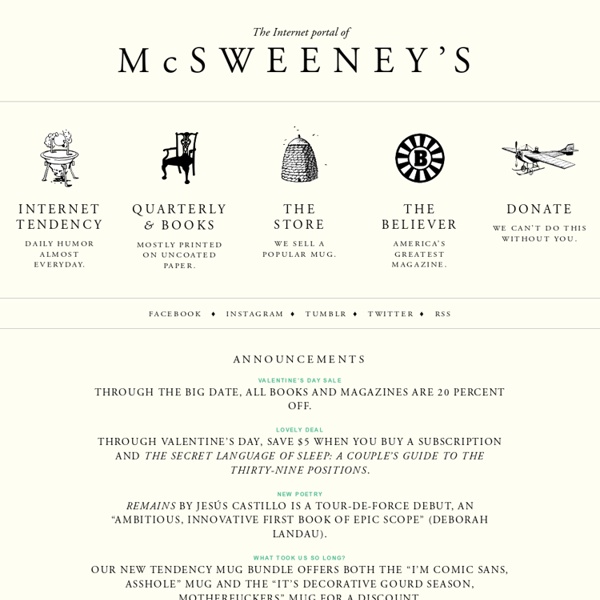 A Heartbreaking Work of Staggering Genius A Heartbreaking Work of Staggering Genius (ISBN 0-330-48455-9) is a memoir by Dave Eggers released in 2000. It chronicles his stewardship of younger brother Christopher "Toph" Eggers following the cancer-related deaths of his parents. Important characters[edit] Heidi McSweeney Eggers – Dave's mother, a woman who has to deal with raising her children while suffering from stomach cancer.

Ploughshares Ploughshares is an American literary magazine established in 1971 by DeWitt Henry and Peter O'Malley in The Plough and Stars, an Irish pub in Cambridge, Massachusetts. Since 1989, Ploughshares has been based at Emerson College in the heart of Boston. Published in April, August, and December in quality paperback, each issue is guest-edited by a prominent writer who explores personal visions, aesthetics, and literary circles. Guest editors have been the recipients of Nobel and Pulitzer prizes, National Book Awards, MacArthur and Guggenheim fellowships, and numerous other honors.

The Walrus The Walrus launched in September 2003 with a straightforward mandate: to be a national general interest magazine about Canada and its place in the world. We are committed to presenting the best work by the best writers and artists from Canada and elsewhere, on a wide range of topics for curious readers. If you are a writer interested in contributing to The Walrus, please read the magazine and follow our submission guidelines. Advertisers and partners can find dates and rates on our advertising page. We hope you will enjoy The Walrus; let us know what you think.

Mothers News back issue collection May 2010 - July 2013 click the pictures to access these issues (read online or download) via archive.org. PLEASE NOTE: Mothers News is not an online newspaper, and the following year's worth of issues will NOT be made available online. To read new issues you must subscribe, and have the physical paper mailed to you. Mothers News homepage House of Leaves House of Leaves is the debut novel by American author Mark Z. Danielewski, published in March 2000 by Pantheon Books. A bestseller, it has been translated into a number of languages, and is followed by a companion piece, The Whalestoe Letters. The format and structure of House of Leaves is unconventional, with unusual page layout and style, making it a prime example of ergodic literature.[1][2] It contains copious footnotes, many of which contain footnotes themselves, including references to fictional books, films or articles.[3] Some pages contain only a few words or lines of text, arranged in strange ways to mirror the events in the story, often creating both an agoraphobic and a claustrophobic effect.

Antioch College The current issue is available for $10. : Purchase Online : Pay by Mail : Subscribe : © Cover Art by David Battle Editorial Robert S. Fogarty, Our Doppelganger Moment Best Online Literary Magazines This is a rewrite of our Best Online Literary Magazines list. This list along with our Top 50 literary magazine list has gotten a lot of attention. Atlantic Monthly wrote in an issue last year that they hoped “rank and file” lists of magazines wasn’t a trend that would continue. That is not saying they were referring to us or had ever heard of our little list, but we believe it is important for these lists to exist.

An Excerpt from McSweeney’s Next Issue, Josephine Rowe Illustration: Carson Murdach Do not adjust your set. What you see before you is an excerpt from the latest issue of McSweeney’s, our alluring, laid-back, westerly sister. Curiouser still, the McSweeney’s site has an excerpt from our new interview with Geoff Dyer. Have we gone mad? Extremely Loud and Incredibly Close Extremely Loud and Incredibly Close is a 2005 novel by Jonathan Safran Foer. The book's narrator is a nine-year-old boy named Oskar Schell. In the story, Oskar discovers a key in a vase that belonged to his father that inspires him to search all around New York for information about the key. Synopsis[edit] While looking through his father's closet, Oskar finds a key in a small envelope inside a vase he smashed; on the outside of the envelope the word "Black" is written in the top left corner.

Welcome - New Ohio Review New Ohio Review submissions opened September 15th. Congratulations Miles Harvey's "At the Grave of Sadie Thorpe" received a Notable Essays citation in Best American Essays 2015. Find his nonfiction essay in NOR 15. Jackie Craven was recently selected by Kate Bernheimer as the Omnidawn 2014 Fabulist Fiction Prize Winner! Existere: A Journal of Art & Literature Copies now available at Chapters/Indigo and independent retailers across Canada! Existere exists as a venue for emerging and established talent from York University and around the world. We publish poetry, fiction, visual art, interviews, reviews, essays, photographs, art, and much more from established and emerging talents. We also debut new writers, poets, and artists. Existere publishes biannually. Contributors come from as close as our University and from all around the world.