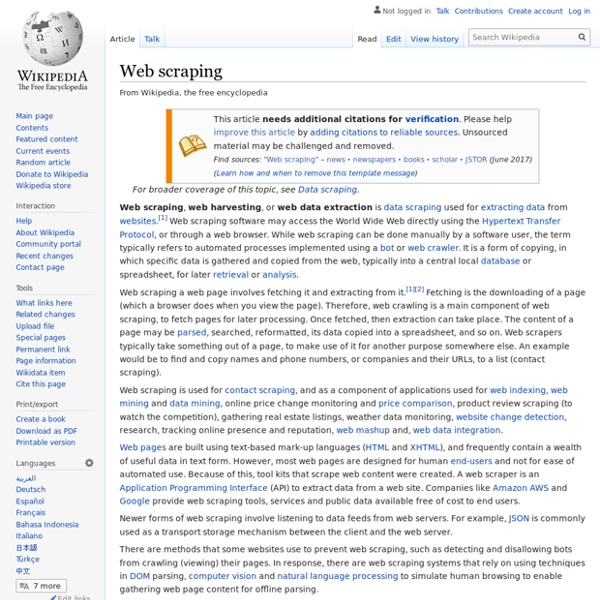 Web scraping, web harvesting, or web data extraction is data scraping used for extracting data from websites.[1] Web scraping software may access the World Wide Web directly using the Hypertext Transfer Protocol, or through a web browser. While web scraping can be done manually by a software user, the term typically refers to automated processes implemented using a bot or web crawler. It is a form of copying, in which specific data is gathered and copied from the web, typically into a central local database or spreadsheet, for later retrieval or analysis. Web scraping a web page involves fetching it and extracting from it.[1][2] Fetching is the downloading of a page (which a browser does when you view the page). Therefore, web crawling is a main component of web scraping, to fetch pages for later processing. Once fetched, then extraction can take place. Newer forms of web scraping involve listening to data feeds from web servers. History[edit] Techniques[edit] Human copy-and-paste[edit]

Web service A Web service is a method of communications between two electronic devices over a network. It is a software function provided at a network address over the web with the service always on as in the concept of utility computing. The W3C defines a Web service as: Web science Human behavior co-constituting the web. Web science is an emerging interdisciplinary field concerned with the study of large-scale socio-technical systems, particularly the World Wide Web.[1][2] It considers the relationship between people and technology, the ways that society and technology co-constitute one another and the impact of this co-constitution on broader society. Web Science combines research from disciplines as diverse as sociology, computer science, economics, and mathematics.[3] An earlier definition was given by American computer scientist Ben Shneiderman: "Web Science" is processing the information available on the web in similar terms to those applied to natural environment.[4] The Web Science Institute describes Web Science as focusing "the analytical power of researchers from disciplines as diverse as mathematics, sociology, economics, psychology, law and computer science to understand and explain the Web. Research groups[edit]

Web literacy Web literacy comprises the skills and competencies needed for reading, writing and participating on the web.[1] It has been described as "both content and activity" – i.e., web users should not just learn about the web but also how to make their own website.[2] History of the concept[edit] In the latter part of the 1990s, literacy researchers started to explore the differences between printed text and the network-enabled devices with screens.

Web intelligence Web intelligence is the area of scientific research and development that explores the roles and makes use of artificial intelligence and information technology for new products, services and frameworks that are empowered by the World Wide Web.[1] The term was coined in a paper written by Ning Zhong, Jiming Liu Yao and Y.Y. Ohsuga in the Computer Software and Applications Conference in 2000.[2] Research[edit] Web 2.0 for development History[edit] Technology Overview[edit] Usage[edit] Web 2.0 applications are used in the development sector for a number of purposes and by different actors. Examples are ...

White-label product A white-label product is a product or service produced by one company (the producer) that other companies (the marketers) rebrand to make it appear as if they had made it.[1][2] History[edit] The name derives from the image of a white label on the packaging that can be filled in with the marketer's trade dress. WebVR WebVR is an experimental JavaScript application programming interface (API) that provides support for virtual reality devices, such as the HTC Vive, Oculus Rift, Google Cardboard or OSVR in a web browser.[1] This API is designed with the following goals in mind:[2] Detect available Virtual Reality devices.Query the devices capabilities.Poll the device’s position and orientation.Display imagery on the device at the appropriate frame rate. History[edit] WebVR was first conceived in spring 2014 by Vladimir Vukićević from Mozilla. The API's contributors include Brandon Jones, Boris Smus and others from the Mozilla team.[3] On March 1, 2016, the Mozilla VR team and the Google Chrome team announced the version 1.0 release of the WebVR API proposal.

Windows Management Instrumentation Microsoft also provides a command-line interface to WMI called Windows Management Instrumentation Command-line (WMIC).[3] Purpose of WMI[edit] The purpose of WMI is to define a proprietary set of environment-independent specifications which allow management information to be shared between management applications. WMI prescribes enterprise management standards and related technologies for Windows that work with existing management standards, such as Desktop Management Interface (DMI) and SNMP. WMI complements these other standards by providing a uniform model. This model represents the managed environment through which management data from any source can be accessed in a common way.