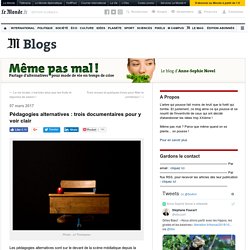 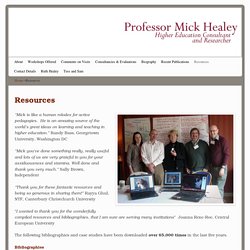 He is an amazing source of the world’s great ideas on learning and teaching in higher education.” Randy Bass, Georgetown University, Washington DC. Contemporary educational ideas all my staff should know about. Key ideas from different sources. 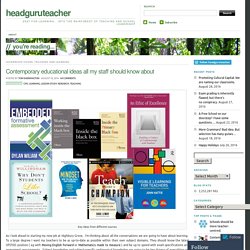 As I look ahead to starting my new job at Highbury Grove, I’m thinking about all the conversations we are going to have about learning. To a large degree I want my teachers to be as up-to-date as possible within their own subject domains. They should know the latest OfSTED position ( eg with Moving English Forward or Mathematics: made to measure ) and be up to speed with exam specifications and assessment requirements. Critical Pedagogy: Intentions and Realities - Hybrid Pedagogy. Paragogy and Heutagogy. Advancing the Theory and Practice of Self-Determined Learning. All Things Heutagogy. Alfred North Whitehead (1861–1947) - The Nature of Education, Educational Development and the Rhythm of Growth, Universities and Professional Training. One of the twentieth century's most original metaphysicians and a major figure in mathematical logic, Alfred North Whitehead was also an important social and educational philosopher. 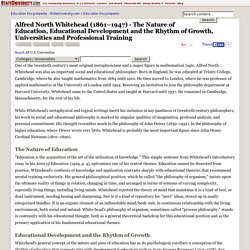 Born in England, he was educated at Trinity College, Cambridge, where he also taught mathematics from 1884 until 1910. He then moved to London, where he was professor of applied mathematics at the University of London until 1924. Receiving an invitation to join the philosophy department at Harvard University, Whitehead came to the United States and taught at Harvard until 1937. He remained in Cambridge, Massachusetts, for the rest of his life. What is Connected Learning. Ninth-grader Charles Raben has seen first-hand that by connecting the many spheres of his life -- peers, interests and academic pursuits -- new learning experiences can and will present themselves in both organized and unstructured ways. 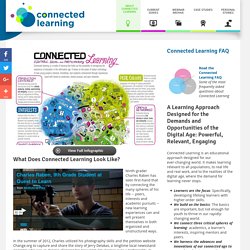 In the summer of 2012, Charles utilized his photography skills and the petition website Change.org to capture and share the story of Jerry Delakas, a longtime local newsstand operator who was in danger of losing his New York City license over a technicality. "I wanted to have that experience of creating change myself. " The petition-making process proved to be a life-changing learning experience for the teen. The PAH Continuum: Pedagogy, Andragogy & Heutagogy. Guest post by Fred Garnett Fred Garnett In my teaching practice, mostly with socially-excluded kids attempting to get some qualifications in college, I developed a number of techniques for showing them how to be successful on their own terms. 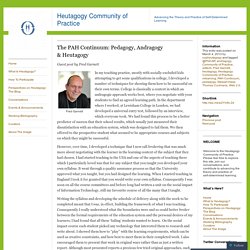 College is classically a context in which an andragogic approach works best, where you negotiate with your students to find an agreed learning path. In the department where I worked, at Lewisham College in London, we had developed a universal entry test, followed by an interview, which everyone took. We had found this process to be a better predictor of success that their school results, which usually just measured their dissatisfaction with an education system, which was designed to fail them.

However, over time, I developed a technique that I now call brokering that was much more about negotiating with the learner in the learning context of the subject that they had chosen. That, in effect, is what we now called the PAH Continuum. Teaching and Learning in the Rhizome: challenges and possibilities. June 22, 2015 by jennymackness. 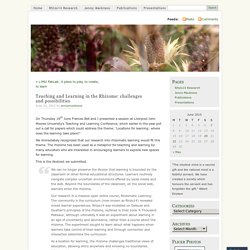 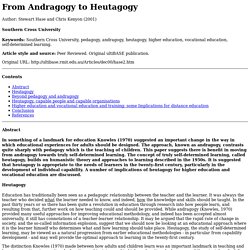 Article style and source: Peer Reviewed. Original ultiBASE publication. Using Education to Serve the Individual: A Conversation with Steve Hargadon (Part 2 of 2) We’re not recognizing that there’s something profoundly important in the dialogue around the philosophy of education, rather than the structured reform of it. — Steve Hargadon This is the second part of a two part interview with Steve Hargadon, founder of the Learning Revolution conference series and the Classroom 2.0 social network for educators. 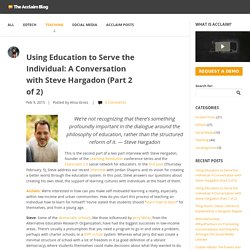 In the first post (Thursday February, 5), Steve address our recent interview with Jordan Shapiro, and its vision for creating a better world through the education system. In this post, Steve answers our questions about creating his own ideal, the support of learning cultures with individuals at the heart of them. Key Pedagogic Thinkers - Dave Cormier. Introduction/Background Who is Dave? 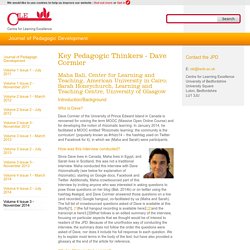 Dave Cormier of the University of Prince Edward Island in Canada is renowned for coining the term MOOC (Massive Open Online Course) and for developing the notion of rhizomatic learning. In January 2014, he facilitated a MOOC entitled 'Rhizomatic learning: the community is the curriculum' (popularly known as #rhizo14 – the hashtag used on Twitter and Facebook for it), in which we (Maha and Sarah) were participants. How was this interview conducted? Since Dave lives in Canada, Maha lives in Egypt, and Sarah lives in Scotland, this was not a traditional interview. ‘To create is to hurt a little’ – a Dutch perspective on creative learning. This is a guest blog written by Richard Gerver and Rik Seveke. In a world of growing complexity and accelerating change the creative capacities of people are increasingly important to design our personal and collective lives.

If we truly value the development of creativity in our children, we need to redeem ourselves of our addiction to measurable development. In the Netherlands and the United Kingdom there is little doubt of the importance of creativity. Learning, Technology and Community: A Journey of the Self. Look at how ALT defines itself on its website. It's an identity that's very much at the boundary of different things: technology, but also change management, learning theory, etc. Vygotsky on Collective Creativity. Posted by keithsawyer in Everyday life. Tags: Collective creativity, creativity, lev vygotsky, vygotsky, walter isaacson trackback I just re-read a classic article about creativity, written almost 100 years ago by the legendary Russian psychologist Lev Vygotsky.

The meaning of pedagogy. Disrupting Ourselves: The Problem of Learning in Higher Education. Randy Bass (bassr@georgetown.edu) is Associate Provost and Executive Director of the Center for New Designs in Learning and Scholarship at Georgetown University. Comments on this article can be posted to the web via the link at the bottom of this page. A growing appreciation for the porous boundaries between the classroom and life experience, along with the power of social learning, authentic audiences, and integrative contexts, has created not only promising changes in learning but also disruptive moments in teaching.

Learning theories and online learning. The Progressive-Traditional Pedagogy Tree. This post is based on my talk for #PedagooLondon14 at the IoE. Having offered to run a workshop ages ago, when finally pressed for a title by the wonderful, patient organiser Helene Galdinoshea, I’d just been reading another rather tedious, acrimonious tit-for-tat twitter exchange. Progressives vs Traditionalists acting out The North vs The South or Roundheads vs Cavaliers. My thought was: I don’t get this. I don’t understand the heightened righteousness of each position; it’s not how I relate to my job as a teacher and school leader. So the title was “Walking the Traditional-Progressive Line; why it pays to have a foot in both camps”. My general argument is that, however we define the supposedly opposing poles of traditional and progressive pedagogy, they both have a vital role in a child’s education.

From Andragogy to Heutagogy. Constructivism (philosophy of education. Jean Piaget: founder of Constructivism In past centuries, constructivist ideas were not widely valued due to the perception that children's play was seen as aimless and of little importance. Jean Piaget did not agree with these traditional views, however. Learning Theories, Learning Models, Learning Theory Summaries - in Plain English! Heutagogy, Self-Directed Learning and Complex Work. Pedagogy had always established an unequal relation between the teacher and the taught. Advancing the Theory and Practice of Self-Determined Learning. Heutagogy and lifelong learning: A review of heutagogical practice and self-determined learning.

International Journal of Learning and Media - Full Text. Learning Theory v5 - What are the established learning theories? Towards a Working Theory of Learning: The Affective Context Model. Rhizomatic Education : Community as Curriculum.

9 reasons why I am NOT a Social Constructivist. Learning Transfer as Preparedness. Maslow's hierarchy of needs. Maslow's hierarchy of needs, represented as a pyramid with the more basic needs at the bottom[1] Theories for the digital age: Connectivism. The Difference Between Instructivism, Constructivism, And Connectivism. Connectivism must abandon its ideas? Bill Gates: ‘It would be great if our education stuff worked but…’ Bill Gates (Ben Stansall/AFP/Getty Images) Français. A Simple Guide To 4 Complex Learning Theories.

Hayo Reinders. Communities of practice. The False Dichotomy Between Facts And Creativity. Eight Ways of Looking at Intelligence. A Great Wheel of All The Learning Theories Teachers Need to Know about. To encourage creativity, Mr Gove, you must first understand what it is. Why it's caveat emptor when it comes to some educational research - Article. Teachers need to drive the research agenda. Preparing to Teach in the Lifelong Learning Sector. Critical Review of Connectivism: A Learning Theory for the Digital Age. Student-Centered versus Student-Led Education. A leak of insight: the ‘task’ of language learning. Formal versus informal language learning.

Teaching and Learning Publications. Connectivism as Epistemology. Why Connectivism is not a Learning Theory « A Point of Contact. Models of Learners. Some 20x20 thinking about the metaphor of the “rhizome” in learning. Blog marathon: 50 blogs on learning theorists over next 50 days. Educational Thinkers.