Every Game An Adventure 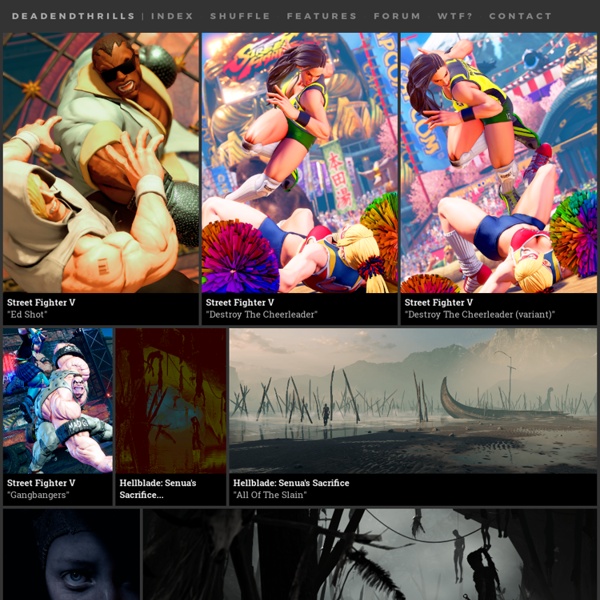 Typeset In The Future Right from the opening scene, we're treated to Kubrick's love of bold, clean, sans-serif typography: This title card is set in Gill Sans, one of the all-time classic sans-serif fonts. Perhaps surprisingly, the zeroes in ‘2001’ appear to be set with the Gill Sans capital letter O (shown below on the left), rather than its zero character (shown on the right): After introducing us to Albertus, the Dawn Of Man turns out to be typographically unremarkable. So, let's skip forward a little, and join Dr. #GamingBytes: Beware of these PUBG cheats Please report hackers when you see them PUBG takes strict action against hackers, having banned over a million. The game's hack detection systems are also up to date and known hacks get players immediately banned. If you feel someone cheated and killed you, use the report button on the death screen. Aimbots A bullet with your name on it

Exhibition 18 - 'Fairy Tales' March 10th, 2012 In an attempt to recreate the nostalgic memories of childhood, the Slashthree Collective selected ‘Fairy Tales’ as the theme of its eighteenth exhibition. The project invited our artistic core to recreate the magic they felt as children when they were whisked off to a land far, far away. Each piece of art in this exhibition is a unique, beautiful interpretation of fairy tales from both popular culture, as well as the contributing artist’s own culture, all of which have come together to create one of our finest exhibitions to date.

The art of the tutorial: When to hold a player's hand, when to let it go Earlier this month, my Twitter feed flared up briefly with complaints about the "hand-holdy" quality of tutorials in many modern games. It subsided pretty quickly, but I thought it raised some interesting questions: Who do you build tutorials for, exactly? How have developers changed their approach to tutorial design now that games which envelop players with barely any attempt at guidance -- titles like Minecraft, Dark Souls and DayZ -- have become huge influences on the industry? And perhaps most importantly to developers -- if you're going to welcome players into your game with some level of tutorializing, how do you do it well? How Video Games Revived The Dying Art Of Japanese Woodprinting Whether Hyrule or the Mushroom Kingdom, we’re used to video game heroes saving their own respective pixel worlds. This is the story of how video game characters like Mario, Link, and Kirby helped save a "floating world" (literally translated): ukiyo-e, a genre in the ancient craft of Japanese woodprinting. After artistically languishing for most of the 20th century, the craft is in the process of being discovered by a whole new generation, thanks to Ukiyo-E Heroes, a collaboration between American illustrator Jed Henry and British craftsman David Bull that reimagines popular video game characters in the context of medieval Japan. Of all the visual art the West associates with ancient Japan, woodprints are probably the most well known. You may not have ever heard the term ukiyo-e before, or know how a Japanese woodprint is made, but if you’ve ever seen a copy of The Great Wave off Kanagawa or The Dream of the Fisherman’s Wife, you know the style.

EPIC - Creative agency In the spotlight Want to challenge your SEO? Knewledge contacted us to benefit from our design expertise to update their logo and rethink their visual identity from the ground up. We’re proud of it! How to make Planets & Nebulas in Photoshop There a lot of space tutorials out there some are better than others, I have managed to try and select a few of what I think can allow you to get great effects that look like they belong and don’t look completely Photoshopped. I tried to be as varied as possible so there are tutorials for creating planets, stars, nebulas and atmospheric type gasses. The great thing is that they lay down the building blocks to experiment and create you own stunning universe.

#GamingBytes: Five best Battle Royale games like PUBG Mobile A deliberate exclusion of epic proportions In our list, we have deliberately excluded the biggest competitor of PUBG, Fortnite. Developed by Epic Games, Fortnite recently launched for Android and is not yet available in all countries or across all devices. This prompted us to exclude Fortnite in favor of other games. Knives Out So knives out, cut him up, don't look down

Speed-painting FanArt: RobotRush: Spit-painting: 30 minutes speed-painting Mekas: 31 Breathtaking Planet & Space Tutorials For Photoshop Creating stunning space scenes is a great way to practice many photoshop techniques. It’s amazing that many of these tutorials use limited source files and most effects are created with photoshop itself. Rock textures are used to help create surfaces. #GamingBytes: Five toughest achievements to unlock in PUBG What is an achievement in PUBG? An achievement is like a mission within a game of PUBG. The game asks players to carry out various tasks or get specific styles of kills to unlock these achievements. In most cases, unlocking them is rewarded within the game through special cosmetics. Fists Welcome to the Fight Club of Battle Royale

Adam Spizak's Portfolio Personal project based on Pearl Jam song.Digital Art, Illustration, Motion Graphics2014 IronMan type projectArt Direction, Illustration, Typography2013 I had a great opportunity to contribute to the annual desktopography project curated by Pete Harrison. This year i've made the exercise focused on delivering two images inspired by endangered species. The project used set of different styles – from digital painting to 3D and uses mystical and sci-fi metaphors to highlight the issue of species facing a very high risk of extinction.Art Direction, Digital Art, Illustration2013 Welcome to the Game!