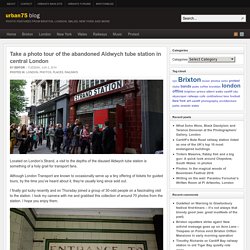 Although London Transport are known to occasionally serve up a tiny offering of tickets for guided tours, by the time you’ve heard about it, they’re usually long since sold out. I finally got lucky recently and on Thursday joined a group of 30-odd people on a fascinating visit to the station. I took my camera with me and grabbed this collection of around 70 photos from the station. I hope you enjoy them. Dating back to Edwardian times and closing in 1994, the station was known as the Strand until 1915 and formed part of the Piccadilly line network. In pictures: Down Street abandoned tube station. If I’ve learnt anything from my time editing this here blog, it’s that Londoners love abandoned tube stations. 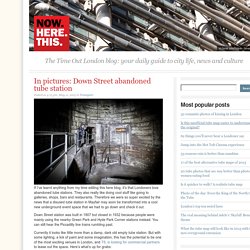 They also really like doing cool stuff like going to galleries, shops, bars and restaurants. Therefore we were so super excited by the news that a disused tube station in Mayfair may soon be transformed into a cool new underground event space that we had to go down and check it out. Down Street station was built in 1907 but closed in 1932 because people were mainly using the nearby Green Park and Hyde Park Corner stations instead. You can still hear the Piccadilly line trains rumbling past. Currently it looks like little more than a damp, dark old empty tube station.

Oooh – lovely classic Leslie Green-designed ox-blood red tiled entrance. The wonderfully eerie and cool lift shaft that could soon be a bar/theatre/who knows. Here’s the not-so-inviting-looking tunnel that could also be rented out. And finally, the classic spiral staircase that leads you back to the fresh air. London's Abandoned Tube Stations. Hidden posters of Notting Hill Gate Tube station, 2010. Underground History - Kingsway Underpass.

A few yards up the Kingsway from Holborn tube station lies a strange strip of road that seems to belong to an earlier time era. 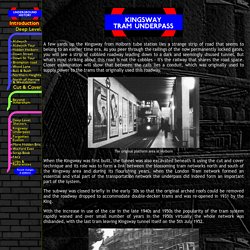 As you peer through the railings of the now permanently locked gates, you will see a strip of cobbled roadway leading down to a dark and seemingly disused tunnel. But what's most striking about this road is not the cobbles - it's the railway that shares the road space. Closer examination will show that between the rails lies a conduit, which was originally used to supply power to the trams that originally used this roadway. The original platform area at Holborn. The World's Best Photos of disused and holborn. Flickr Hive Mind is a data mining tool for the Flickr database of photography. 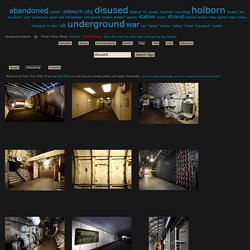 Flickr Hive Mind is a search engine as well as an experiment in the power of Folksonomies. All thumbnail images come directly from Flickr, none are stored on Flickr Hive Mind. These photos are bound by the copyright and license of their owners, the thumbnail links take to you to the photos (as well as their copyright and license details) within Flickr.

Because some other search engines (Google, etc.) index parts of Flickr Hive Mind, you may have been led here from one of them. Welcome to Flickr Hive Mind, almost certainly the best search engine for photography on the web. Flickr Hive Mind is a data mining tool for the Flickr photography database, allowing search by: tags(keywords); Flickr photography groups; Flickr users, their contacts, and favorites; free text; the Flickr Explore algorithm for interestingness. Top 10 Abandoned London Underground Stations Part 1. Interesting Abandoned Places. Disused Stations: Shoreditch Station (East London Line) Down Street Station - A London Inheritance. This year has been a good year for exploring disused underground tunnels. 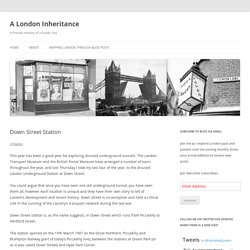 The London Transport Museum and the British Postal Museum have arranged a number of tours throughout the year, and last Thursday I took my last tour of the year, to the disused London Underground Station at Down Street. You could argue that once you have seen one old underground tunnel, you have seen them all, however each location is unique and they have their own story to tell of London’s development and recent history. Down Street is no exception and held a critical role in the running of the country’s transport network during the last war.

Down Street station is, as the name suggests, in Down Street which runs from Piccadilly to Hertford Street. The station opened on the 15th March 1907 on the Great Northern, Piccadilly and Brompton Railway (part of today’s Piccadilly line), between the stations at Green Park (or as it was called Dover Street) and Hyde Park Corner. Looking down the stairs: Double sink unit. 13 Abandoned Stations & Disused Platforms of the London Underground.