What is social isolation? 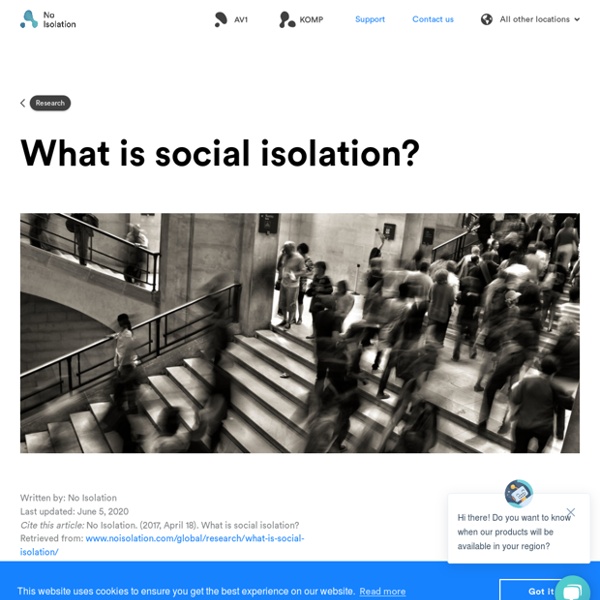 Written by: No Isolation Last updated: June 5, 2020 Social isolation is a term often used interchangeably with loneliness, but while the two are closely related, they do not necessarily mean the same thing. You can be lonely in a crowd, but you will not be socially isolated. Isolation has been defined as an objective state whereby the number of contacts a person has can be counted, whereas loneliness is a subjective experience. While the terms may have slightly different meanings, both can be painful experiences and have a harmful impact on the individual. Social isolation describes the absence of social contact and can lead to loneliness. There are many contributing factors to social isolation. Some may be physically able to go out and meet people but are inhibited from doing so by factors such as depression, social adversity, becoming a carer for a loved one, or bereavement.

Causes of Social Isolation in Elderly Adults No one likes to feel lonely or isolated, but for many seniors, it’s a feeling they know all too well. As we get older, our children move away, we lose touch with friends, and sometimes have difficulty getting out of the house to socialize. All of these things contribute to isolation and loneliness in the elderly, though they mean two different things. Social isolation, sometimes referred to as objective isolation, is the physical separation from other people (living alone). People experiencing social isolation typically have minimal social contact, little or no quality relationships, and lack a sense of belonging. It differs from loneliness in that its focus is social contact rather than subjective feelings of being alone.

Relationship between elderly and younger family members deteriorating during Covid-19 lockdown: Survey More than half of elderly people feel that their health is deteriorating and their relationship with family members, particularly with their sons and daughters, have further deteriorated during the Covid-19 lockdown, a survey has claimed. The survey of around 5,000 people over the phone by Agewell Foundation also claimed that every second elderly person was of the view that they are being mistreated, harassed, shouted at, threatened, neglected isolated or marginalised. Also Read: Coronavirus India update: State-wise total number of confirmed cases Around 55% feel that that current lockdown situation is affecting their health condition adversely while 75% said that they missed the "healing touch of their doctor" while 43% have to avoid regular pathological check-ups all of a sudden.

Caregiver Support Expand All | Collapse All Care Navigation More physical touchpoints for information and referral: Goodtherapy's Guide on Isolation and Loneliness Some people use the words “isolation” and “loneliness” interchangeably, but this does not reflect the true meaning of each term. Isolation may lead to loneliness, and in some cases, loneliness may exacerbate isolation. Both have been found to occur with other mental health issues such as anxiety or depression. Knowing how loneliness and isolation are distinct and related can help people who struggle with them best address and work through these issues. Here are a few things to know about handling loneliness and social isolation in your life. The Difference Between Isolation and Loneliness

Social Isolation and Loneliness in Older Adults: Opportunities for the Health Care System at the status of at-risk populations in other countries (e.g., Steptoe et al., 2013; Zebhauser et al., 2014), studies focusing on at-risk subpopulations in the United States are sparse. Two populations in the United States that have been researched more extensively than others are immigrants and individuals who identify as part of the gay, lesbian, bisexual, and transgender community. Research pertaining to these two groups is described below. Immigrants Evidence suggests that immigrants are more likely to experience social isolation and possibly loneliness than non-immigrants.

Social Isolation Leads to Depression for Seniors As people age, they may become isolated; and that isolation can lead to depression, according to a recent post from the Straits Times. A study led by Dr. Nadee Goonawardene reveals that seniors living alone are most at risk for mental health issues like depression. 7 factors that could lead to social isolation Winter can be an especially solitary time for some seniors, who may find they are spending more time alone in their homes because of bad weather or lack of transportation. Canadian research shows that isolation isn’t just confined to the winter months for older adults: a recent federal government profile of social isolation estimated that 30 per cent of seniors are at risk of becoming socially isolated.* A report from the International Federation of Ageing also identified social isolation as one of the top issues facing Canada’s aging population.* What does it mean to be socially isolated?

Unexpected Causes of Senior Isolation While seniors have lived full and fulfilling lives, they may experience loneliness and isolation as they get older. Whether a senior lives alone at home or has been moved to a facility where they are surrounded by other seniors, they may have desires to interact with friends and loved ones but not be able to. Actions from family members or friends could also leave them feeling more isolated and alone than over. In this blog post, we will talk about unexpected causes of isolation in seniors and how you can help them feel included. Ways of Preventing Social Isolation Among Seniors As seniors age, their lives can become more isolated. Their families are no longer at home with them, and they may begin to isolate themselves from the outside world because it has become more difficult for them to get out. Social isolation among seniors can also impact their health.

Health Effects of Social Isolation and Loneliness – Aging Life Care Association™ Clifford Singer, MD Adjunct Professor, University of Maine Chief, Geriatric Mental Health and Neuropsychiatry Acadia Hospital and Eastern Maine Medical Center 268 Stillwater Avenue Bangor Maine 04402 207.973.6179 csinger@emhs.org Cliff Singer is a geriatrician and psychiatrist. He lives in Orono, Maine and directs the Mood and Memory Clinic at Acadia Hospital and Alzheimer’s Disease Research Program for Acadia Hospital and Eastern Maine Medical Center in Bangor. He trained in general psychiatry and geriatric medicine at Oregon Health and Science University and served on the faculties of psychiatry and neurology there and at the University of Vermont before moving to Maine in 2010.