The Complete, Untold History of Halo - Waypoint. Will Your CPU Bottleneck Your Graphics Card? How to figure out whether your system is going to put a damper on your video card upgrade plans. 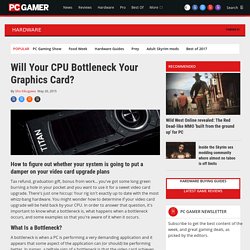 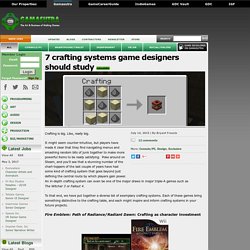 Like, really big. It might seem counter-intuitive, but players have made it clear that they find navigating menus and smashing random bits of junk together to make more powerful items to be really satisfying. Poke around on Steam, and you'll see that a stunning number of the chart-toppers of the last couple of years have had some kind of crafting system that goes beyond just defining the central route by which players gain power.

An in-depth crafting system can even be one of the major draws in major triple-A games such as The Witcher 3 or Fallout 4. To that end, we have put together a diverse list of exemplary crafting systems. Making Horizon Zero Dawn's Machines feel like living creatures. One of the most memorable features of the recent PlayStation 4 title Horizon Zero Dawn are the sophisticated robots, known as Machines, that wander the game world like a natural part of the landscape. 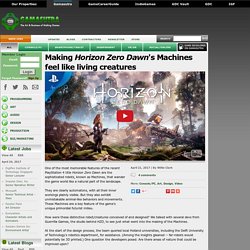 They are clearly automatons, with all their inner workings plainly visible. But they also exhibit unmistakable animal-like behaviors and movements. These Machines are a key feature of the game's unique primordial futurist milieu. How were these distinctive robot/creatures conceived of and designed? We talked with several devs from Guerrilla Games, the studio behind HZD, to see just what went into the making of the Machines. Guild Wars 2’s art style passes from father to son. Recently I had the chance to talk to ArenaNet (and thus Guild Wars 2) art director Horia Dociu about his work at the studio. 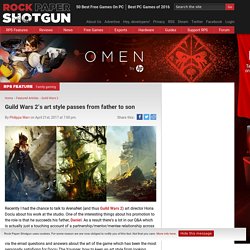 One of the interesting things about his promotion to the role is that he succeeds his father, Daniel. Venice Unleashed - Experience Battlefield 3 like never before! What is NVIDIA Fast Sync? Fast Sync HowTo. Official technical explanation by NVidia: starts at 1:28:30 Video Demonstration by Battle(non)sense: An illustrative diagram I made for 60Hz (applies to any refresh rate): Enabling:Available for Pascal (and Maxwell) as pointed out in NVCP. 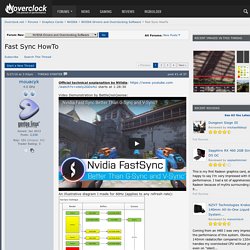 Options are now: *On, Use the 3D application setting, Off, or Fast. Seems like SLI disables the Fast option and enables a Smooth option. Frame Rate (FPS) vs Refresh Rate (Hz) - AVADirect. When comparing the performance of two gaming computers, we often look at the frame rates each computer is capable of producing in a certain game at the same resolution and graphics quality. 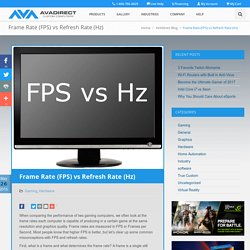 Frame rates are measured in FPS or Frames per Second. Most people know that higher FPS is better, but let’s clear up some common misconceptions with FPS and refresh rates. First, what is a frame and what determines the frame rate? A frame is a single still image, which is then combined in a rapid slideshow with other still images, each one slightly different, to achieve the illusion of natural motion. The frame rate is how many of these images are displayed in one second. How to Organize Your Desktop With Windows 10 Snap Assist.

Since Windows 7, Microsoft has offered a handy feature for re-sizing windows: snap and resize to the left or right side and top or bottom side of the screen or maximize by dragging and dropping. 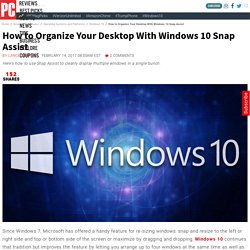 Do higher frame-rates always mean better gameplay? DriveClub director Paul Rustchynsky recently claimed that "the most important thing for a racing game is a locked frame-rate". 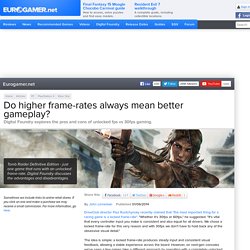 "Whether it's 30fps or 60fps," he suggested. Gears of War 4 Graphics & Performance Guide. By Andrew Burneson Wed, Oct 05 2016Featured Stories, DirectX 12, Graphics & Performance, Guides Gears of War 4 launches October 7th on PC for Ultimate Edition buyers, and October 11th for everyone else, including those who bought a GeForce GTX GPU, system or laptop bundled with the game. 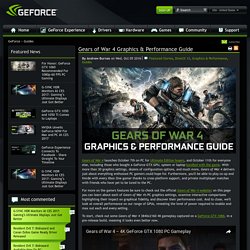 With more than 30 graphics settings, dozens of configuration options, and much more, Gears of War 4 delivers just about everything enthusiast PC gamers could hope for. Furthermore, you'll be able to play co-op and Horde with every Xbox One gamer thanks to cross-platform support, and private multiplayer matches with friends who have yet to be lured to the PC. For more on the game's features be sure to check out the official Gears of War 4 website; on this page you can learn about each of Gears of War 4's PC graphics settings, examine interactive comparisons highlighting their impact on graphical fidelity, and discover their performance cost. Guide Contents: SurroundBestPracticesGuide. News - Up For Debate - Full Screen Vs Borderless Full Screen Vs Windowed PC Gaming. When feverishly tweaking all the settings for optimal performance and graphical quality in the latest games, I often find it’s easy to gloss over something so simple as fullscreen options. 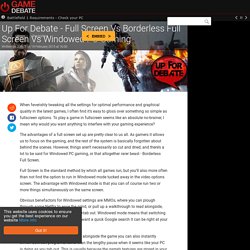 To play a game in fullscreen seems like an absolute no-brainer, I mean why would you want anything to interfere with your gaming experience? The advantages of a full screen set up are pretty clear to us all. As gamers it allows us to focus on the gaming, and the rest of the system is basically forgotten about behind the scenes. Screen Change. The following terms were coined by the members of the WSGF to describe how different games behave on a widescreen monitor, when compared to a 4:3 monitor. Hor+ (Horizontal Plus) A hor + game is a game that when played on a widescreen monitor with a widescreen resolution, expands the horizontal component of the FOV while keeping the vertical component roughly or exactly the same.

This is often considered the ideal solution for widescreen games, as it grants widescreen users a wider picture. Vert- (Vertical Minus) A vert - game is a game that when played on a widescreen monitor with a widescreen resolution, decreases the vertical component of the FOV. Anamorphic Is a specific behavior of letterboxed pictures. World of Warcraft: Mists of Pandaria. An Overview of Mouse Technology. CS:S Mouse Optimization Guide. CS:S Mouse Optimization Guide Hello everyone, There seems to be a fair amount of misunderstanding about mouse related concepts like resolution, in game sensitivity, acceleration, USB report rates, Windows settings, etcetera. Lesson 3: Response. [gn_pullquote align="left"]Code that responds to input from the mouse, keyboard, and other devices has to run continuously. To make this happen, place the lines that update inside a Processing function called draw(). [/gn_pullquote] You may have noticed two functions that appear often in many Processing sketches: setup() and draw().

You’ll need the draw() function to create animations, because code within the draw() block runs from top to bottom and repeats until you stop running the sketch. Each trip through draw() is called a frame. The case for 30fps PC gaming. Top-of-the-line enthusiast gaming PCs are built for raw performance, boasting technical specifications with far more horsepower than the Xbox One and PlayStation 4, opening up a wealth of gameplay options unavailable to console owners.

If you fancy gaming at 2.5K, or 4K, at 60fps, 120fps or even higher, the PC is the only format with the flexibility and scalability to deliver. But that's not to say that the console-standard 30fps isn't a good fit for certain hardware specs, or specific titles. In a wealth of scenarios, limiting frame-rate can result in a markedly smoother gameplay experience.

There's just one problem - only the tiniest minority of PC games actually offer the option to run at a locked 30fps. Bad UX design gets the worst out of gamers. Bioshock Infinite – HUD and UI customisation. A look at the UX of mods. I have been brushing up on the challenges that game developers face when trying to map the user journey of players for their game, and I came across this really interesting peer-reviewed paper, by Hector Postigo, on the modding culture and its community. This got me thinking: since modders just build what they are passionate about and don’t really take the UX of customers into consideration, yet somehow their products can be very successful, surely game devs would be better off getting modders on board throughout the development to ensure their game has the biggest possible appeal?

UX Redesign: Creating a Consistent Cross-Platform Experience. 11313.34398. 10.1. Game Interface Design. Gamification and Interface Design: How Game Elements Affect User Experience. It’s not easy for a video game to be successful. Awesome User Interface Design Examples You Need To See. How #UX Design Affects the Success of Video Games. A program, app, or game’s user interface encompasses all elements that allow the user to provide input and receive feedback from the software. User interface includes elements like the code, supported input and output hardware devices, and audio and video feedback, and stands between the user and the internals of the software.