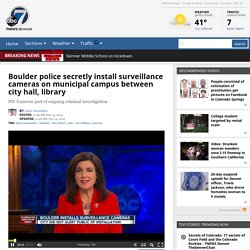 The city quietly placed two cameras on the municipal building and one on the library in early January. When asked about the secrecy, Boulder Police Department spokeswoman Kim Kobel said, "The reason those cameras were installed is because we have an ongoing criminal investigation in the area. " Kobel gave few details about the investigation, but did say police have received numerous complaints about criminal behavior, including assault, threatening behavior, urinating in public and drug dealing. "In some cases, we have drug dealing to high school students," she said. The cameras have touched a raw nerve with some residents, especially those who hang out in the public space.

"They're violating our rights and our freedom," said Bailey Flood. Not everyone looks at it that way. More surveillance cameras don't make you safer, ACLU says. In a post last month, we told you about a new website called CommunityCam, which planned to use crowd-sourcing techniques to document and map all the security cameras in public areas throughout Denver and other nearby areas. 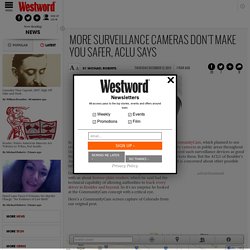 The site's founder mainly portrayed such surveillance devices as good things -- no surprise, given that his main company sells and markets them. But the ACLU of Boulder's Judd Golden doesn't equate more cameras with more safety and is concerned about other possible infringements on personal privacy as they proliferate. Golden isn't new to this issue. Back in August, he talked with us about license-plate readers, which he said had the technical capability of allowing authorities to track every driver in Boulder and beyond. 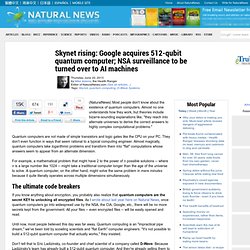 Almost no one understands how they work, but theories include bizarre-sounding explanations like, "they reach into alternate universes to derive the correct answers to highly complex computational problems. " Quantum computers are not made of simple transistors and logic gates like the CPU on your PC. They don't even function in ways that seem rational to a typical computing engineer. Almost magically, quantum computers take logarithmic problems and transform them into "flat" computations whose answers seem to appear from an alternate dimension. For example, a mathematical problem that might have 2 to the power of n possible solutions -- where n is a large number like 1024 -- might take a traditional computer longer than the age of the universe to solve. If you know anything about encryption, you probably also realize that quantum computers are the secret KEY to unlocking all encrypted files.

Skynet. A step too far against surveillance. By The Denver Post Editorial Board Posted: 02/06/2014 05:45:58 PM MST|Updated: about a year ago A Denver Police HALO surveillance camera keeps an eye on pedestrians. 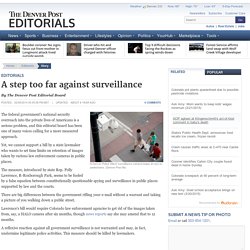 (Denver Post file) The federal government's national security overreach into the private lives of Americans is a serious problem, and this editorial board has been one of many voices calling for a more measured approach. Yet, we cannot support a bill by a state lawmaker who wants to set time limits on retention of images taken by various law enforcement cameras in public places. The measure, introduced by state Rep. Colorado police secretly using video cameras to spy. As each day passes, Colorado becomes more and more like California. 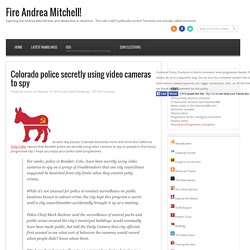 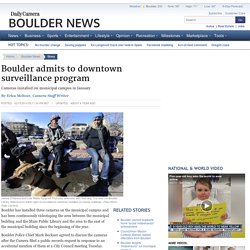 Boulder Police Chief Mark Beckner agreed to discuss the cameras after the Camera filed a public records request in response to an accidental mention of them at a City Council meeting Tuesday. Beckner said Thursday that the three cameras were installed the week of Jan. 6 in response to an increase in reports of criminal activity on the municipal campus, especially the lawn area between the municipal building and the library. 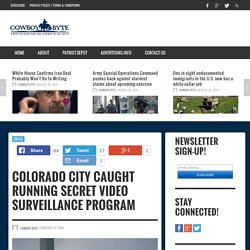 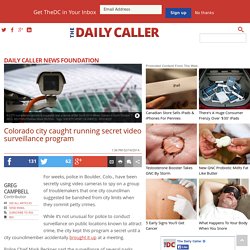 While it’s not unusual for police to conduct surveillance on public locations known to attract crime, the city kept this program a secret until a city councilmember accidentally brought it up at a meeting. Police Chief Mark Beckner said the surveillance of several parks and public areas around the city’s municipal buildings would eventually have been made public, but told the Daily Camera that city officials first wanted to see what sort of behavior the cameras would record when people didn’t know about them. “We hope that it eventually acts as a prevention device but also as a tool to solve crime,” he told the paper. “We think that once people know about it, it could have a change in behavior.”