The Future of Work, Robotization, and Capitalism’s Ability to Generate Useless Jobs. The meaning of life in a world without work. Most jobs that exist today might disappear within decades. 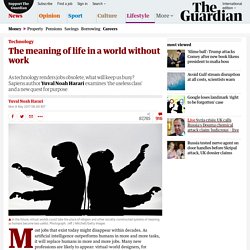 Log In - New York Times. Universal Basic Income Accelerates Innovation by Reducing Our Fear of Failure. By Scott Santens Almost two centuries ago an idea was born with such explanatory power that it created shock waves across all of human society and whose aftershocks we’re still feeling to this day. 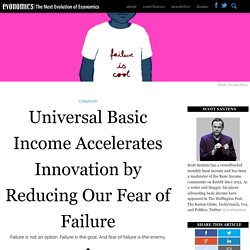 What if jobs are not the solution but the problem? Work means everything to us Americans. 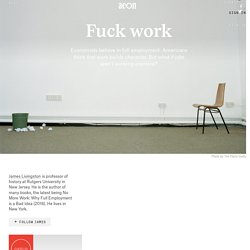 For centuries – since, say, 1650 – we’ve believed that it builds character (punctuality, initiative, honesty, self-discipline, and so forth). We’ve also believed that the market in labour, where we go to find work, has been relatively efficient in allocating opportunities and incomes. New Research Points The Finger At Employers For The Widespread Talent Shortage.

The recent hacking of Colin Powell's email accounts prompted juicy headlines about the former Secretary of State's dislike of Donald Trump and withering criticism of Hillary and Bill Clinton. 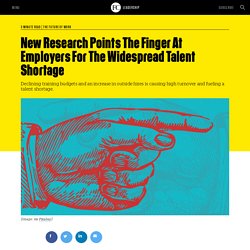 But it has also revealed plenty of inside details and gossip about drama in Silicon Valley through correspondence related to Powell's role as a board member of Salesforce.com and as a strategic adviser to one of the tech world's most powerful venture capital firms, Kleiner, Perkins, Caufield and Byers. And it provided unprecedented insight into the revolving door between government and industry—complete with its perks, insider deals, and extraordinary access. When he left the Bush Administration in 2005 after serving as the first African-American secretary of state, Powell was perfectly positioned to take advantage of his new life in the private sector. A decorated military hero and politically moderate and well-respected official, he managed to avoid the bulk of the blame for the Iraq War.

Deep Learning Is Going to Teach Us All the Lesson of Our Lives: Jobs Are for Machines – Basic income – Medium. (An alternate version of this article was originally published in the Boston Globe) On December 2nd, 1942, a team of scientists led by Enrico Fermi came back from lunch and watched as humanity created the first self-sustaining nuclear reaction inside a pile of bricks and wood underneath a football field at the University of Chicago. 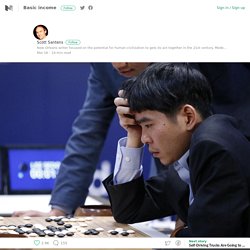 Known to history as Chicago Pile-1, it was celebrated in silence with a single bottle of Chianti, for those who were there understood exactly what it meant for humankind, without any need for words. Theconversation. Philosophers, economists and other academics have long discussed the idea of “basic income” – an unconditional monthly check from the government to every citizen, in an amount at least high enough to cover all basic necessities. 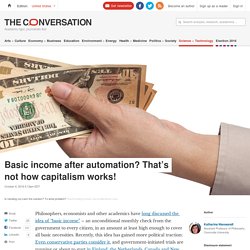 Recently, this idea has gained more political traction: Even conservative parties consider it, and government-initiated trials are running or about to start in Finland, the Netherlands, Canada and New Zealand. One reason this idea has caught politicians’ attention is the fear that large-scale automation will soon put many people out of work permanently, even as economic growth continues. (Truck and taxi drivers are currently the most discussed example.) Basic income is seen as a solution to the social problems that the predicted “technological umemployment” will bring. In the past, the argument goes, there was a lot of work to be done. Universal Basic Income. Why Capitalism Creates Pointless Jobs. In the year 1930, John Maynard Keynes predicted that technology would have advanced sufficiently by century’s end that countries like Great Britain or the United States would achieve a 15-hour work week. 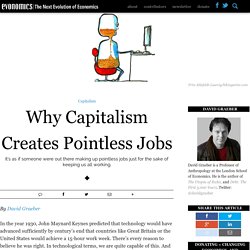 There’s every reason to believe he was right. In technological terms, we are quite capable of this. And yet it didn’t happen. Instead, technology has been marshaled, if anything, to figure out ways to make us all work more. Basic Income: A Sellout of the American Dream. Matt Krisiloff is in a small, glass-walled conference room off the lobby of Y Combinator’s office in San Francisco’s South of Market neighborhood, shouting distance from some of the country’s wealthiest startups, many of which Y Combinator has nurtured and helped fund. 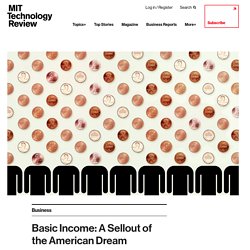 Krisiloff, who manages the operations of the tech incubator’s program for very early-stage companies, is explaining why it is committed to investing an amount said to be in the tens of millions of dollars in a venture that is guaranteed never to make a penny. It’s the simplest business model conceivable: hand thousands of dollars over to individuals in return for nothing, no strings attached. Krisiloff insists he and his Y Combinator colleagues can’t wait to get started giving away the money. A universal basic income won't stop people from working–it will change the nature of work — Quartz.

A Basic Income Would Upend America’s Work Ethic—and That’s a Good Thing. We have been ruled for years by archaic economic ideas, particularly the claim that a healthy dose of economic austerity is the best way to get the economy’s engines firing again. 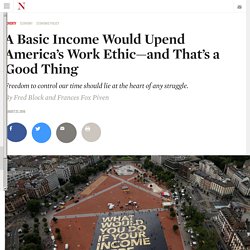 It is a zombie idea, discredited almost nine decades ago when Herbert Hoover insisted on balancing the budget during a crisis, and sent the economy into a tailspin. If bad ideas are not allowed to die, good ideas slip into obscurity. Interactive: Charting the Automation Potential of U.S. Jobs. In last week’s Chart of the Week, we noted that 1.3 million industrial robots would be installed between 2015 and 2018, and this would more than double the stock of active robots around the world. 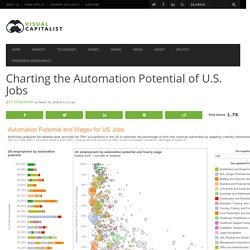 While many of those robots will be used in the automotive and electronics sectors, there are many other roles that robots will be filling in the future. Surprisingly, according to global consultant McKinsey & Co, not all of these jobs are low-skill, low-wage jobs, either. Mckinsey ran a comprehensive study of nearly 800 different jobs in the United States, ranging from CEOs to fast food workers.

An economic experiment in California will give citizens free money, but big questions remain. Silicon Valley's most well-known startup incubator will soon be experimenting with a centuries-old economic idea in an effort to study how assured monthly income could modify tech's economic impact in a future where technology takes our jobs. Y Combinator (YC) is launching a very small basic income pilot program later this summer in Oakland, California.

The organization is planning on giving 100 residents in the city a guaranteed monthly income of between $1,800 to $2,000, possibly more, for six to 12 months. It will be funded by YC's nonprofit arm YC Research and led by research director Elizabeth Rhodes, Ph.D graduate from the University of Michigan. Basic income is an idea that's floated around since the 16th century; philosopher Thomas More touches on a similar idea in his book Utopia. What If Everybody Didn't Have to Work to Get Paid? Why Is Productivity So Weak? Three Theories. The Depressing Scenario The productivity slowdown is real, and it’s not going away. Earlier waves of innovation in technology (a computer on every office worker’s desk, for example) and management strategies (like outsourcing noncore functions) have been fully put into place across corporate America, and so are no longer increasing productivity. Add to that a slowdown in capital spending by businesses since the 2008 recession, which means workers aren’t getting better equipment or software that might help them do their jobs more efficiently.

Moreover, if you believe the theory mentioned above about low-productivity workers being more likely to lose their jobs during the recession, the people returning to the labor force now may be less effective at boosting economic output for each hour they put in. Modeling basic income - does it add up? - Data4America. The Argument for Universal Basic Income. Artificial intelligence: ‘Homo sapiens will be split into a handful of gods and the rest of us’ If you wanted relief from stories about tyre factories and steel plants closing, you could try relaxing with a new 300-page report from Bank of America Merrill Lynch which looks at the likely effects of a robot revolution. Another Money Is Possible: Holland Leads Experiment in Basic Income. The STEM Crisis Is a Myth. Robots are taking your job and mine: deal with it. Two striking articles on the roboticization of the workforce: first is Kevin Kelly in Wired, with "Better Than Human", an optimistic and practical-minded look at the way that robots change the jobs landscape, with some advice on how to survive the automation of your gig:

How Technology Is Destroying Jobs. Report Suggests Nearly Half of U.S. Jobs Are Vulnerable to Computerization. Is Your Job Among The 47% That Robots Could Steal? Robert Reich: In Our Horrifying Future, Very Few People Will Have Work or Make Money. Automation Makes Us Dumb. Humans Need Not Apply.

The collaborative economy is destroying jobs. So what's next? A Plenitude Economy. In Praise of Leisure - The Chronicle Review. The Gospel of Consumption. The Case for a 21-Hour Work Week. The 30-Hour Workweek Is Here (If You Want It) Let’s Be Less Productive. Who Own's The Future? Brookings Study: U.S. Entrepreneurship on the Wane.

Thinking Utopian: How about a universal basic income? Progressives' hot new poverty-fighting idea has just one basic problem: Science. Why the Fed should hand out wads of cash to everyone. Even the Council on Foreign Relations Is Saying It: Time to Rain Money on Main Street. Here's How To Fund A Guaranteed Basic Income. Opinion: What if the government guaranteed you an income?