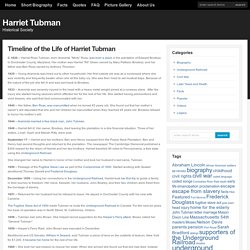 Her mother was Harriet “Rit” Green owned by Mary Pattison Brodess; and her father was Ben Ross owned by Anthony Thomson. 1825 – Young Araminta was hired out to other households. Her first outside job was as a nursemaid where she was violently and frequently beaten when she let the baby cry. She was then hired to set muskrat traps. Because of the nature of the job she fell ill and was sent back to Brodess. 1833 – Araminta was severely injured in the head with a heavy metal weight aimed at a runaway slave. 1840 – Her father, Ben Ross, was manumitted when he turned 45 years old. 1844 – Araminta married a free black man, John Tubman. 1849 – Harriet fell ill.

September 17 – Harriet and her brothers, Ben and Henry, escaped from the Poplar Neck Plantation. She changed her name to Harriet in honor of her mother and took her husband’s last name, Tubman. Harriet Tubman: Former slave who risked all to save others. Image copyright Getty Images Sometime in mid-October 1849, Harriet Tubman crossed the invisible line that borders the state of Pennsylvania. 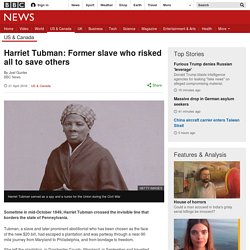 Tubman, a slave and later prominent abolitionist who has been chosen as the face of the new $20 bill, had escaped a plantation and was partway through a near-90 mile journey from Maryland to Philadelphia, and from bondage to freedom. She left the plantation, in Dorchester County, Maryland, in September and travelled by night. Her exact route is unknown, but she probably walked along the Choptank river and journeyed through Delaware, guided by the North Star. Years later, she recalled the moment she entered Pennsylvania: "When I found I had crossed that line, I looked at my hands to see if I was the same person. In the years that followed, Tubman returned again and again to Maryland to rescue others, conducting them along the so-called "underground railroad", a network of safe houses used to spirit slaves from the South to the free states in the North. 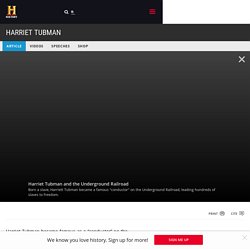 “Mah people mus’ go free,” her constant refrain, suggests a determination uncommon among even the most militant slaves. She returned to the South at least nineteen times to lead her family and hundreds of other slaves to freedom via the Underground Railroad. Utilizing her native intelligence and drawing on her boundless courage, she eluded bounty hunters seeking a reward for her capture, which eventually went as high as forty thousand dollars. She never lost a fugitive or allowed one to turn back. Two things sustained her: the pistol at her side and her faith in God. Tubman collaborated with John Brown in 1858 in planning his raid on Harpers Ferry. Tubman’s resistance to slavery did not end with the outbreak of the Civil War. After the war, Tubman returned to Auburn, New York, and continued to help blacks forge new lives in freedom. Harriet Tubman - Civil Rights Activist. 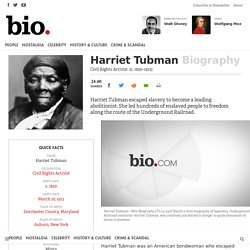 She led hundreds of enslaved people to freedom along the route of the Underground Railroad. Synopsis Harriet Tubman was an American bondwoman who escaped from slavery in the South to become a leading abolitionist before the American Civil War. She was born in Maryland in 1820, and successfully escaped in 1849. Yet she returned many times to rescue both family members and non-relatives from the plantation system. Early Life Harriet Tubman was born to enslaved parents in Dorchester County, Maryland, and originally named Araminta Harriet Ross. Minty’s early life was full of hardship. Harriettubmanbiography.