Biblical. Ein Sof. Ein Sof, or Ayn Sof (/eɪn sɒf/, Hebrew: אין סוף), in Kabbalah, is understood as God prior to his self-manifestation in the production of any spiritual Realm, probably derived from Ibn Gabirol's term, "the Endless One" (she-en lo tiklah). 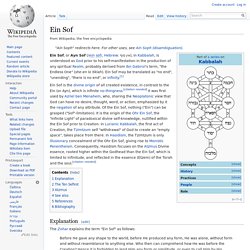 Ein Sof may be translated as "no end", "unending", "there is no end", or Infinity.[1] Ein Sof is the divine origin of all created existence, in contrast to the Ein (or Ayn), which is infinite no-thingness. [citation needed] It was first used by Azriel ben Menahem, who, sharing the Neoplatonic view that God can have no desire, thought, word, or action, emphasized by it the negation of any attribute. Of the Ein Sof, nothing ("Ein") can be grasped ("Sof"-limitation).

3 Ways to Cross Yourself. Edit Article Three Methods:Western TraditionEastern TraditionRosary PrayerCommunity Q&A Crossing oneself is a common practice for Christians in liturgical churches, especially but not limited to the Eastern Orthodox, Roman Catholic, Lutheran, and Anglican (Episcopal) churches. 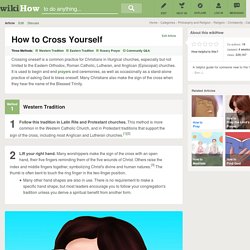 It is used to begin and end prayers and ceremonies, as well as occasionally as a stand-alone practice of asking God to bless oneself. Many Christians also make the sign of the cross when they hear the name of the Blessed Trinity. Steps Western Tradition 1Follow this tradition in Latin Rite and Protestant churches. <img alt="Image titled Cross Yourself Step 5" src=" width="728" height="546" class="whcdn">7Say "Amen". Eastern Tradition. Breaking! Standing Rock Sioux Tribe Issues Statement on Corps Decision to Not Grant Easement. The Standing Rock Sioux Tribe has just issued a statement on the U.S. 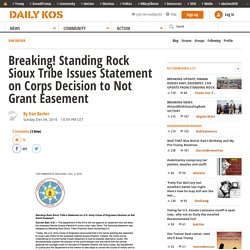 Army Corps of Engineers decision to not approve an easement that will allow the proposed Dakota Access Pipeline to cross under Lake Oahe. The news was reported on MSNBC and confirmed in the statement by the Tribe. This is a big victory for the Tribe and their many thousands of allies. I will post more news as I receive it. Right now the water protectors, including the thousands of veterans that self-deployed to Standing Rock over the weekend, are celebrating in the camp. “It is officially over,” said (via Facebook) Caleen Sisk, Chief and Spiritual Leader of the Winnemem Wintu Tribe, who is currently at Standing Rock with other members of her Tribe. “There's not a dry eye in camp,” said Mauro Oliveira, long time water, anti-war and indigenous rights activist, who is also currently at the camp showing his solidarity with the Standing Rock Sioux. standwithstandingrock.net/… Standing Rock Sioux Tribe’s Statement on U.S.

Orishas » Santeria Church of the Orishas. An artist’s rendition of the major Orishas of Santería. 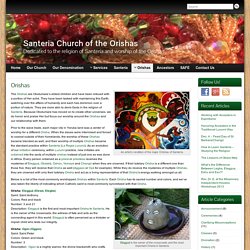 The Orishas are Olodumare’s eldest children and have been imbued with a portion of Her aché. They have been tasked with maintaining this Earth, watching over the affairs of humanity and each has dominion over a portion of nature. They are more akin to demi-Gods in the religion of Santería. Because Olodumare has moved on to create other universes, we do honor and praise Her but focus our worship around the Orishas and our relationship with them. Prior to the slave trade, each major city in Yoruba land was a center of worship for a different Orisha. Below is a list of the most commonly worshipped Orishas within Santería.

Elegguá is the owner of the crossroads and the most important Orisha in Santeria Orisha: Elegguá (Elewá, Elegbá) Saint: Saint Anthony Colors: Red and black Number: 3 and 21 Description: Elegguá is the first and most important Orisha in Santería. Skepticism-13 October 1670: New Virginia Law Decrees All Non-Christian Servants Sailing to Colony will be Slaves for Life. In Virginia, a new law decrees that all non-Christian servants brought to the colony "by shipping" will be slaves for life. 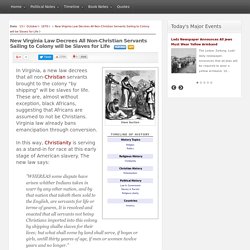 These are, almost without exception, black Africans, suggesting that Africans are assumed to not be Christians. Virginia law already bans emancipation through conversion. In this way, Christianity is serving as a stand-in for race at this early stage of American slavery. The new law says: "WHEREAS some dispute have arisen whither Indians taken in warr by any other nation, and by that nation that taketh them sold to the English, are servants for life or terme of yeares, It is resolved and enacted that all servants not being Christians imported into this colony by shipping shalbe slaves for their lives; but what shall come by land shall serve, if boyes or girls, untill thirty yeares of age, if men or women twelve years and no longer.