Harvey Weinstein sentenced to 23 years in prison after addressing his accusers. "I'm not going to say these aren't great people, I had wonderful times with these people, you know," Weinstein said of his accusers. 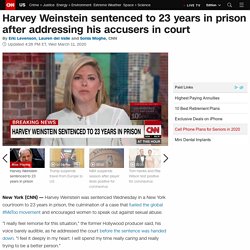 "It is just I'm totally confused and I think men are confused about all of these issues. " Judge James Burke sentenced him to 20 years in prison for criminal sexual act and three years in prison for rape. Harvey Weinstein condamné à 23 ans de prison pour viol et agression sexuelle. What If Weinstein Walks? – Ms. Magazine. At his May 2018 arraignment in Manhattan Criminal Court, Harvey Weinstein wore a blue sweater over an untucked button-down shirt and a dark blazer—a costume no doubt chosen to soften his appearance. 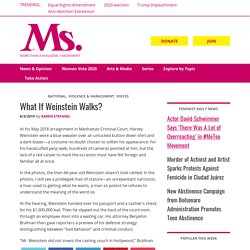 For his handcuffed perp walk, hundreds of cameras pointed at him, but the lack of a red carpet to mark the occasion must have felt foreign and familiar all at once. In the photos, the then 66-year-old Weinstein doesn’t look rattled. In the photos, I still see a privileged man of stature—an unrepentant narcissist, a man used to getting what he wants, a man so potent he refuses to understand the meaning of the word no. At the hearing, Weinstein handed over his passport and a cashier’s check for his $1,000,000 bail. Then he slipped out the back of the courtroom through an employee door into a waiting car. “Mr. Reading this news, I feel repulsion—a queasy, sick feeling in my gut. I know how it feels to watch an attacker exit the courtroom a free man. 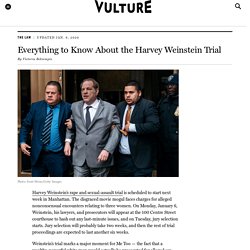 The disgraced movie mogul faces charges for alleged nonconsensual encounters relating to three women. On Monday, January 6, Weinstein, his lawyers, and prosecutors will appear at the 100 Centre Street courthouse to hash out any last-minute issues, and on Tuesday, jury selection starts. Jury selection will probably take two weeks, and then the rest of trial proceedings are expected to last another six weeks. Who protected Harvey Weinstein and what they say now - Insider. Harvey Weinstein began his trial in a Manhattan court on January 6.In 2017, investigations uncovered numerous allegations of sexual assault against legendary producer Harvey Weinstein. 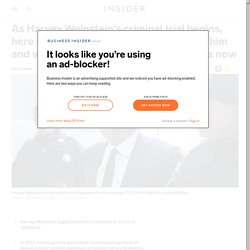 Since then, the details of Weinstein's powerful social and legal network have been revealed by the same reporters and taken center stage in court proceedings against the disgraced producer that began in 2020 over several counts of varied sexual misconduct.Some Hollywood heavyweights sounded off on the case, and key figures who were closest to Weinstein in the fallout of the investigations fought hard to push back on the reports.

Visit Business Insider's homepage for more stories. In 2017, the New York Times and The New Yorker published investigations into repeated settlements paid out by legendary producer Harvey Weinstein over the course of several years in response to sexual misconduct allegations. These are the people that defended Harvey Weinstein, and what they have to say on the matter now. 5 Weinstein Accusers on Controversial $25 Million Settlement. Left to right: Larissa Gomes, Caitlin Dulany, Ally Canosa Photo: Vulture and Getty Images Last week, the New York Times revealed that Harvey Weinstein, more than 30 women who had accused him of sexual assault, and his now defunct film studio, the Weinstein Company, had agreed to a $25 million tentative settlement that would end many of the sexual-misconduct lawsuits against him. 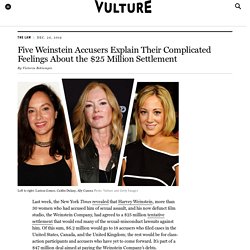 Of this sum, $6.2 million would go to 18 accusers who filed cases in the United States, Canada, and the United Kingdom; the rest would be for class-action participants and accusers who have yet to come forward. It’s part of a $47 million deal aimed at paying the Weinstein Company’s debts. Some participants in this civil settlement told the Times that they were disappointed with the agreement but that it was the best possible outcome. Attorneys Douglas H. Celebrities who knew about Harvey Weinstein before he was charged - Insider.

Producer Donna Gigliotti worked with Weinstein on projects like "Shakespeare in Love". 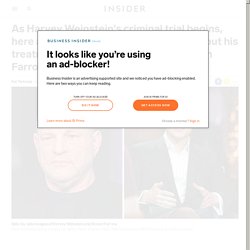 Farrow said she discouraged him from working on the story, telling him Weinstein "isn't guilty of anything worse than what a million other men in this business do," and said she had heard things, but not seen things herself. Later, she told Farrow that documents existed that showed Weinstein never admitted to sexual misconduct, assault, or rape, but did show he paid large sums of money to victims. She told Farrow she could maybe talk if he found the documents, and gave him the names of former employees who had been in the London area during the era Farrow was investigating at that time. Farrow ended up finding out more details connected to Gigliotti.

Opinion: What Harvey Weinstein's lawyers don’t want you to know. Several years ago, a woman I had been treating for an anxiety disorder disclosed to me that her supervisor had raped her 10 years earlier. 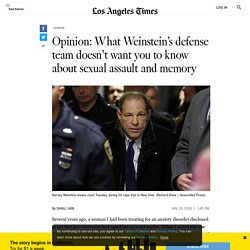 When I asked why she was only now speaking of the rape, she said she always knew she had been raped but the details had been hazy. She had a tough time putting into words what happened that day. Vivid memories of the rape were coming back to her, she said, after recently reading social media posts about her former supervisor being put on administrative leave after several employees made sexual harassment claims. 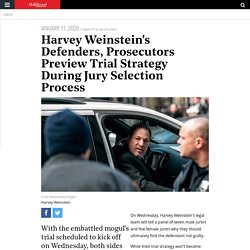 While their trial strategy won't become clear until opening arguments begin, the former movie mogul's lawyers previewed several of their key arguments during two days of formal jury selection on Thursday and Friday. On Thursday, Weinstein lawyer Damon Cheronis asked a panel of 20 potential jurors the following questions: "Does anybody on this jury think that it's possible that an individual can say they were sexually assaulted when they really weren’t? Does anybody think it's possible that someone can have sex with someone they may not find attractive for reasons other than love? Does anybody think that a person who had consensual sex can change their story years later to turn someone into a pariah and say what was once consensual and then say it's something different? " "Scrutinize the hell out of the evidence," Illuzzi said. Harvey Weinstein avait une "liste rouge" de femmes susceptibles de le dénoncer. 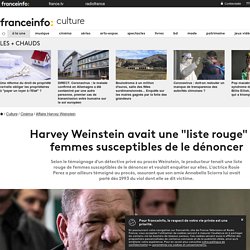 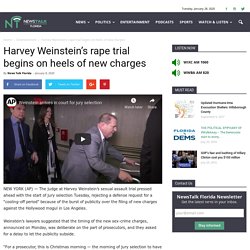 Weinstein’s lawyers suggested that the timing of the new sex-crime charges, announced on Monday, was deliberate on the part of prosecutors, and they asked for a delay to let the publicity subside. “For a prosecutor, this is Christmas morning — the morning of jury selection to have him smeared everywhere,” defense attorney Arthur Aidala said. Among the questions on the form: “If you have seen, read, or heard anything about the case, does that information affect your ability to be a fair and impartial juror?” “There is a grave risk that this defendant will realize at some point that the evidence is overwhelming,” she said. “Mr. Weinstein set to face his toughest legal challenge yet in New York trial. Harvey Weinstein is set to face his toughest legal challenge yet – a criminal trial for rape and sexual assault that could send him to prison for the rest of his life. Only a handful of women will be allowed to testify at the trial in New York supreme court in Manhattan, which begins on 6 January.

But watching from the sidelines will be scores of women who have alleged sexual misconduct and abuse at the hands of Weinstein. In the New York trial, the 67-year-old movie producer is accused of raping a longtime lover, who has not been publicly named, in 2013, and of forcibly performing oral sex on his production assistant in 2006.

The trial will include testimony from these two alleged victims, as well as from Sopranos actor Annabella Sciorra, who said Weinstein raped her at her apartment in the early 1990s. Weinstein Trial Opens After Hollywood Parties At Golden Globes. Hollywood celebrated its sunny side at the Golden Globes last night, but on the opposite coast today a darker picture of the entertainment industry will take center stage. At The Beverly Hilton ceremony, where fallen mogul Harvey Weinstein had long been a huge presence, host Ricky Gervais couldn’t avoid a reference to the scandal that ignited the #MeToo movement in the fall of 2017. “Our next presenter starred in Netflix’s Bird Box, a movie where people survive by acting like they don’t see a thing.

Sort of like working for Harvey Weinstein,” Gervais said as he introduced Sandra Bullock to announce the final award of the evening. The crowd didn’t appreciate the reference but Gervais doubled down: “You did it! I didn’t, you did it!”