Landlords bite back over rights. Landlords warn “mum and dad investors” could pull out of the property market if rules about pets are changed. 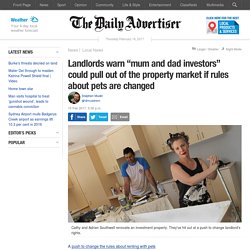 Cathy and Adrian Southwell renovate an investment property. They've hit out at a push to change landlord's rights. A push to change the rules about renting with pets could lead to “mum and dad investors” pulling out of the property market, according to Wagga landlords. A campaign run by the Tenants Union of NSW and backed by animal rescue groups is hoping to make it illegal to discriminate against prospective tenants with pets.

Calls to bond pets to rental properties. Animal welfare service calls for a "pet bond" to cut down on renters surrendering fluffy companions. 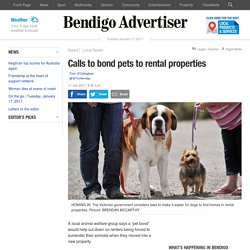 HOMING IN: The Victorian government considers laws to make it easier for dogs to find homes in rental properties. Picture: BRENDAN MCCARTHY A local animal welfare group says a “pet bond” would help cut down on renters being forced to surrender their animals when they moved into a new property. You Can Now Woo Future Landlords With Your Pet's Resume. Finding a pet-friendly rental property for you and your furry friends might just have become a tiny bit easier with the launch of a new service putting your pets in the best light for potential future landlords. 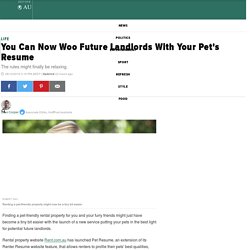 Rental property website Rent.com.au has launched Pet Resume, an extension of its Renter Resume website feature, that allows renters to profile their pets' best qualities, vaccination, registration and training status in the hopes of receiving a successful rental application from landlords. Greg Bader, Chief Executive Officer of Rent.com.au, said: "Introducing a Pet Resume to a prospective landlord, combined with a Renter Resume, can build a real case for responsible pet ownership. " "It's a proactive move that shows a tenant's honest and open approach to taking responsibility for their pets. " But not all is as bright as it seems in the renting world. No Cookies. Will landlords be forced to accept pets? One company is seeking a law change which would compel landlords and property managers to accept pets in rental properties, something some owners are already doing without their PMs’ knowledge.

The annual PETstock Pet Parent Survey interviewed more than 900 pet owners Australia-wide and found around 54 per cent of pet owners believed landlords and property managers should be compelled to allow pets. The survey revealed that while a handful of owners – 8 per cent – admitted their pets had damaged a rental home, 30 per cent ‘strongly agreed’ that landlords should be compelled to accept pets and 24 per cent ‘agreed’.

Only 1.5 per cent ‘strongly disagreed’ with the need to change the law. According to the Australian Bureau of Statistics, 2.16 million renting families are pet owners, but PETstock has concerns landlords are “reluctant to advertise a property as allowing pets” and many renters fear “they won’t be allowed or [will] have their applications rejected”. Written by Staff Reporter. Public push for pet-friendly housing. The perils of finding a pet-friendly rental. Pet-friendly rental properties are few and far between. 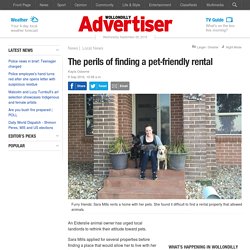 Furry friends: Sara Mills rents a home with her pets. She found it difficult to find a rental property that allowed animals. An Elderslie animal owner has urged local landlords to rethink their attitude toward pets. Sara Mills applied for several properties before finding a place that would allow her to live with her two cats and two dogs. Rspca-queensland-says-shelter-animals-pay-the-price-with-antipet-landlords. Why tenants MUST have the right to keep family pets. Shockingly - it's estimated 19,879 family pets per year are surrendered to the RSPCA because landlords say NO. 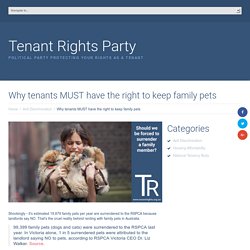 That's the cruel reality behind renting with family pets in Australia. 99,399 family pets (dogs and cats) were surrendered to the RSPCA last year. Why Most Landlords Fear Tenants With Pets. Australia is a nation of pet lovers, with 63 per cent of households owning a four-legged friend - including pets with fins, wings and everything in between. 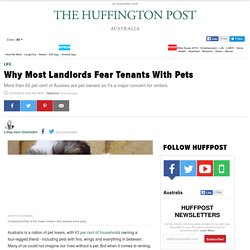 Many of us could not imagine our lives without a pet. But when it comes to renting, finding a home that will allow one or more pets is always challenging. Dogs are the most common pet (39 per cent) followed by cats (29 per cent). Triumph for tenants: VCAT rules against pet bans` The blanket bans on pets in apartments, units, and townhouses could soon come to an end with the recent landmark determination from the Victorian Civil and Administrative Tribunal (VCAT). 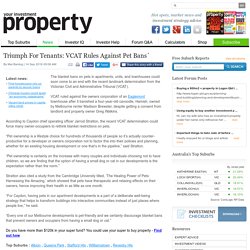 VCAT ruled against the owners corporation of an Eaglemont townhouse after it banished a four-year-old cavoodle, Hamish, owned by Melbourne renter Madison Brewster, despite getting a consent from landlord and property owner Greg Watkins. According to Caydon chief operating officer Jarrod Stratton, the recent VCAT determination could force many owner-occupiers to rethink blanket restrictions on pets. “Pet ownership is a lifestyle choice for hundreds of thousands of people so it’s actually counter-productive for a developer or owners corporation not to factor this into their policies and planning, whether for an existing housing development or one that’s in the pipeline,” said Stratton.

Tenant not liable for dog urine damage to rental carpets. A Foxton landlord is appealing a ruling from the Tenancy Tribunal that stated the woman living in his rental property did not have to pay to replace carpets that her dog urinated and defecated on - even though he had a no pets policy. 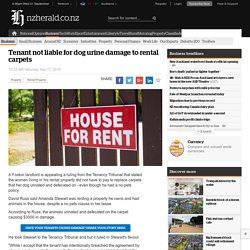 David Russ said Amanda Stewart was renting a property he owns and had animals in the house, despite a no pets clause in her lease. According to Russ, the animals urinated and defecated on the carpet causing $3000 in damage. Tenants Union welcomes VCAT ruling on body corporate pet rules. Posted The Tenants Union of Victoria (TUV) has welcomed a ruling that body corporate rules prohibiting residents from having pets are invalid. 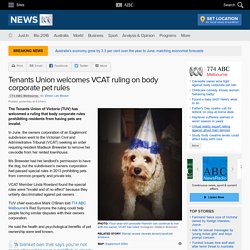 In June, the owners corporation of an Eaglemont subdivision went to the Victorian Civil and Administrative Tribunal (VCAT) seeking an order requiring resident Madison Brewster to remove her cavoodle from her rented townhouse. Ms Brewster had her landlord's permission to have the dog, but the subdivision's owners corporation had passed special rules in 2013 prohibiting pets from common property and private lots. No Cookies. Pets in mix of rent review. A Wodonga company wants to see more pet-friendly rental housing PET bonds and proof of puppy training are among suggestions by a Wodonga company to help landlords allow animals in their rental properties. Mars Petcare made a submission to the Victorian review of the Residential Tenancies Act, saying a few simple changes to the existing laws could support owners and tenants. Why landlords should accept tenants with pets.

Pet owners grapple with rental insecurity. Despite the popularity of pet ownership across countries such as Australia (where 63 per cent of households include a pet), the United States (62 per cent) and United Kingdom (46 per cent), rental policy rarely recognises pets as important members of households. Instead, landlords and property agents typically restrict the right to keep pets. Reports from animal welfare organisations suggest these policies make it difficult for pet owners to find rental housing.

There is also evidence of connections between rental insecurity and poor animal welfare outcomes. Loaded: 0% As pet owners suffer rental insecurity, perhaps landlords should think again. Pet owners grapple with rental insecurity, new research shows. Despite the popularity of pet ownership across countries such as Australia (where 63% of households include a pet), the United States (62%) and United Kingdom (46%), rental policy rarely recognises pets as important members of households. Instead, landlords and property agents typically restrict the right to keep pets.

Reports from animal welfare organisations suggest these policies make it difficult for pet owners to find rental housing. Greyhound racing ban: NSW Government introduces 'urgent' bill to Parliament. Updated Legislation to ban greyhound racing has been officially declared "urgent" to fast-track its passage through New South Wales Parliament, angering Opposition MPs who say they have not even had time to read it.

Key points: Labor objects to "undemocratic" fast passage of billDate for an end to greyhound breeding for racing unclearBill states compensation not payable by state. Greyhound adoption group. We help you save greyhounds. Animal Justice Party. Daily Telegraph. To use this website, cookies must be enabled in your browser. To enable cookies, follow the instructions for your browser below. Facebook App: Open links in External Browser There is a specific issue with the Facebook in-app browser intermittently making requests to websites without cookies that had previously been set. This appears to be a defect in the browser which should be addressed soon.

Daily Telegraph. Against the blanket ban on dogs in New Zealand city rentals.