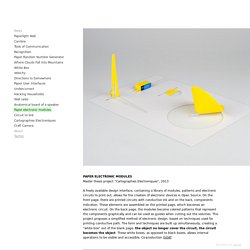 On the front page, there are printed circuits with conductive ink and on the back, components indication. These elements are assembled on the printed page, which becomes an electronic circuit. On the back page, the modules become colored patterns that represent the components graphically and can be used as guides when cutting out the volumes. This project proposes a simplified method of electronic design, based on techniques used for printing conductive path. Vincent leroy. Tele-present wind — David Bowen. Tele-present wind - 2018 This installation consists of a series of 126 x/y tilting mechanical devices connected to thin dried plant stalks installed in a gallery and a dried plant stalk connected to an accelerometer installed outdoors. 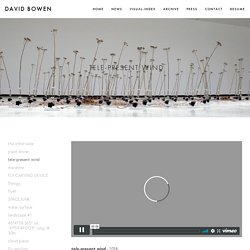 When the wind blows it causes the stalk outside to sway. The accelerometer detects this movement transmitting the motion to the grouping of devices in the gallery. Therefore the stalks in the gallery space move in real-time and in unison based on the movement of the wind outside. May-September 2018 a newly expanded version of tele-present wind was installed at Azkuna Zentroa, Bilbao and the sensor was installed in an outdoor location adjacent to the Visualization and Digital Imaging Lab at the University of Minnesota. 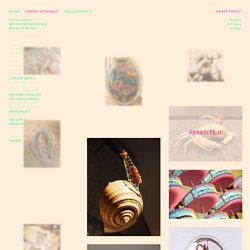 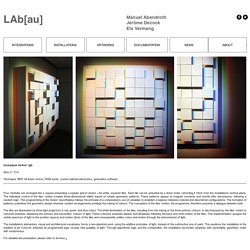 Each tile can be activated by a linear motor retracting it 10cm from the installation’s vertical plane. The individual control of the tiles’ motion creates three-dimensional reliefs based on simple geometric patterns. The tiles are illuminated by three light projectors in red, green and blue colour. 131. Zimoun. WORK — Studio Drift. Studio Drift is intrigued by the continuous attempts of humankind to deal with its limitations, so miraculously opposed to nature as some of these ventures might be. 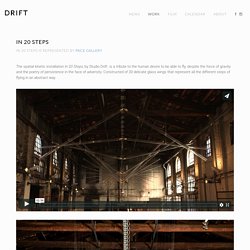 Humankind has always had the desire to fully understand nature while attempting to detach itself from earthly ties. No matter how far science has come, some things are likely to remain forever out of reach. In 20 Steps captures flight in a single moment. The glass emphasiSes the fragility of the movement, and of nature itself. The moving glass breaks the natural light in the space and reflets it in moving rays. 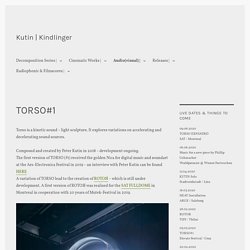 It explores variations on accelerating and decelerating sound sources. Composed and created by Peter Kutin in 2018 – development ongoing. The first version of TORSO (#1) received the golden Nica for digital music and soundart at the Ars-Electronica Festival in 2019 – an interview with Peter Kutin can be found HERE A variation of TORSO lead to the creation of ROTOЯ – which is still under development. A first version of ROTOЯ was realised for the SAT FULLDOME in Montreal in cooperation with 20 years of Mutek-Festival in 2019. Speed ostensibly perverts the illusory order of normal perception, the order of arrival of information. Four 100V speakers rotate on a biaxial structure with a diameter of 2.5 meters. Kutin’s interest to explore this field finds inspiration in the writings of the philosopher Paul Virilio and his concept of dromology – the science of speed. The material was filmed by Johannes Gierlinger and Peter Kutin.