NASA researchers are working on a laser propulsion system that could get us to Mars in 3 days. Despite how far we've come in space exploration, one thing still holding us back from interstellar travel is our slow spacecraft. 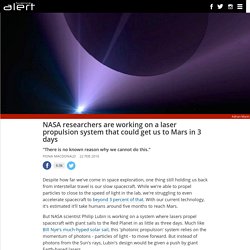 While we're able to propel particles to close to the speed of light in the lab, we're struggling to even accelerate spacecraft to beyond 3 percent of that. With our current technology, it's estimated it'll take humans around five months to reach Mars. But NASA scientist Philip Lubin is working on a system where lasers propel spacecraft with giant sails to the Red Planet in as little as three days. Much like Bill Nye's much-hyped solar sail, this 'photonic propulsion' system relies on the momentum of photons - particles of light - to move forward. How Many People Does It Take to Colonize Another Star System? Back in 2002, John Moore, an anthropologist at the University of Florida, calculated that a starship could leave Earth with 150 passengers on a 2000-year pilgrimage to another solar system, and upon arrival, the descendants of the original crew could colonize a new world there—as long as everyone was careful not to inbreed along the way. 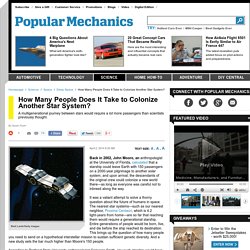 It was a valiant attempt to solve a thorny question about the future of humans in space. The nearest star systems—such as our nearest neighbor, Proxima Centauri, which is 4.2 light-years from home—are so far that reaching them would require a generational starship. Entire generations of people would be born, live, and die before the ship reached its destination. Na Marsu je voda. Tekoucí a hodně slaná, oznámila NASA. AKTUALIZOVÁNO | Echo24 Přelomový objev. 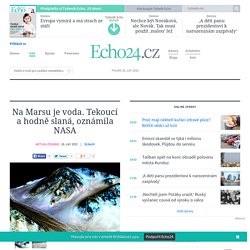 Colonization of Mars. An artist's conception of a human Mars base, with a cutaway revealing an interior horticultural area The colonization of Mars refers to the concept of humans setting out to live permanently on Mars. 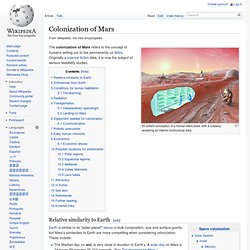 Originally a science fiction idea, it is now the subject of serious feasibility studies. Relative similarity to Earth[edit] Earth is similar to its "sister planet" Venus in bulk composition, size and surface gravity, but Mars's similarities to Earth are more compelling when considering colonization. These include: Differences from Earth[edit] Conditions for human habitation[edit] Conditions on the surface of Mars are closer to the conditions on Earth in terms of temperature, atmospheric pressure than on any other planet or moon, except for the cloud tops of Venus,[11] but are not hospitable to humans or most known life forms due to greatly reduced air pressure, an atmosphere with only 0.1% oxygen, and the lack of liquid water (although large amounts of frozen water have been detected). Elon Musk Says We Could Terraform Mars By Dropping Thermonuclear Bombs On It. Elon Musk has made no secret of his desire to get humans to Mars with his SpaceX company, but in an interview with Stephen Colbert last night, he took things one step further: He suggested it could be possible to terraform Mars by dropping thermonuclear bombs on the ice at its poles. 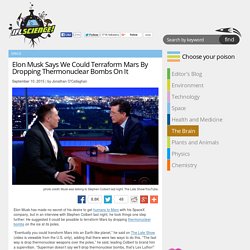 “Eventually you could transform Mars into an Earth-like planet,” he said on The Late Show (video is viewable from the U.S. only), adding that there were two ways to do this. “The fast way is drop thermonuclear weapons over the poles,” he said, leading Colbert to brand him a supervillain. “Superman doesn’t say we’ll drop thermonuclear bombs, that’s Lex Luthor!” Mars One (and done?) In 2012, the “Mars One” project, led by a Dutch nonprofit, announced plans to establish the first human colony on the Red Planet by 2025. 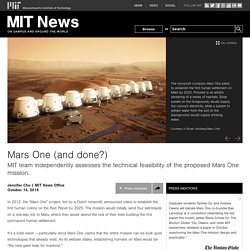 The mission would initially send four astronauts on a one-way trip to Mars, where they would spend the rest of their lives building the first permanent human settlement. It’s a bold vision — particularly since Mars One claims that the entire mission can be built upon technologies that already exist. Mars One. Mars Exploration, Astronauts on Mars & 50 Years of Human Spaceflight. Humanity has been flying in space for 50 years now, but we are still confined to a single planet — Earth. 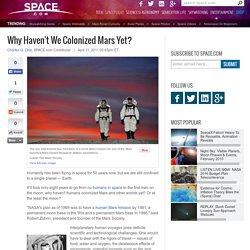 If it took only eight years to go from no humans in space to the first man on the moon, why haven't humans colonized Mars and other worlds yet? Or at the least the moon? Mars One Torn To Shreds In MIT Debate. Whatever your views on Mars One, at the very least they have put the topic of Mars colonization in the public eye. 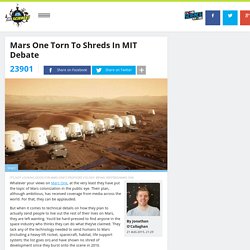 Their plan, although ambitious, has received coverage from media across the world. For that, they can be applauded. The Elon Musk interview on Mars colonisation – Ross Andersen. ‘Fuck Earth!’ 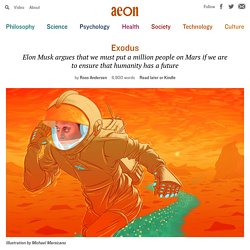 Elon Musk said to me, laughing. ‘Who cares about Earth?’ We were sitting in his cubicle, in the front corner of a large open-plan office at SpaceX headquarters in Los Angeles. It was a sunny afternoon, a Thursday, one of three designated weekdays Musk spends at SpaceX. Musk was laughing because he was joking: he cares a great deal about Earth. When I arrived, Musk was at his computer, powering through a stream of single-line email replies. It was a nice gesture, but in the year 2014 Elon Musk doesn’t need much of an introduction. Popular now Trading your gun for milk: welcome to the hunger games Are we ready for companies that run themselves? 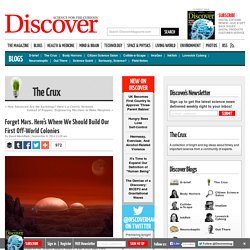 The U.S. has two operational rovers on the planet; a NASA probe called MAVEN and an Indian Mars orbiter will both arrive in Mars orbit later this month; and European, Chinese and additional NASA missions are in the works. Meanwhile Mars One is in the process of selecting candidates for the first-ever Martian colony, and NASA’s heavy launch vehicle is being developed specifically to launch human missions into deep space, with Mars as one of the prime potential destinations.