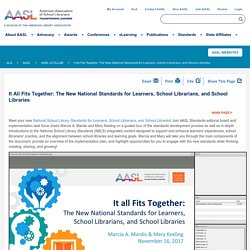 Mardis is associate professor and assistant dean, Interdisciplinary Research and Education, in the College of Communication and Information at Florida State University (FSU) in Tallahassee. A longtime member of AASL, Marcia is chair of the Standards and Guidelines Editorial Board. Among her recent honors were receiving the 2016 FSU College of Communication and Information’s Leadership Builder Award, a 2016 Michigan Association for Media in Education President’s Award for Outstanding Contribution to the Profession, and several research and teaching awards from FSU. Mary Keeling is district supervisor of library media services for Newport News (VA) Public Schools where she has led development and implementation of a district-wide inquiry process model. *AASL Learner Framework Spread. *AASL ReadingtheStandards OnePager 2017. Leading Learning – Standards of Practice for School Library Learning Commons in Canada. Evaluation Checklist. 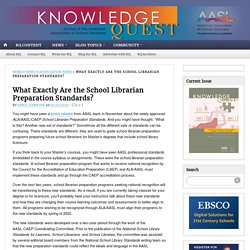 And you might have thought, “What is this? Another new set of standards?” Sometimes all the different sets of standards can be confusing. These standards are different; they are used to guide school librarian preparation programs preparing future school librarians for Master’s degrees that include school library licensure. If you think back to your Master’s courses, you might have seen AASL professional standards embedded in the course syllabus or assignments. Over the next two years, school librarian preparation programs seeking national recognition will be transitioning to these new standards. The new standards were developed over a two-year period through the work of the AASL-CAEP Coordinating Committee. ALA AASL CAEP School Librarian Preparation Standard 2019 Final. AASL Position Statements. Skip to main content Position Statements The following position statement is currently under review to align with the National School Library Standards: 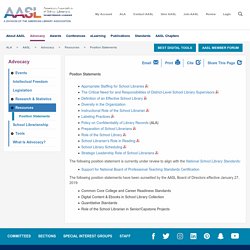 *Something Familiar and Something New: Unpacking the Standards. Drs. 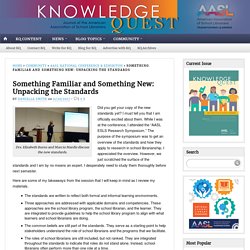 Elizabeth Burns and Marcia Mardis discuss the new standards. Did you get your copy of the new standards yet? I must tell you that I am officially excited about them. While I was at the conference, I attended the “AASL ESLS Research Symposium.” The purpose of the symposium was to get an overview of the standards and how they apply to research in school librarianship. Here are some of my takeaways from the session that I will keep in mind as I review my materials. The standards are written to reflect both formal and informal learning environments.Three approaches are addressed with applicable domains and competencies. Here are some additional features that I liked about the standards: Here are a few ways that you can get familiar with the new standards and the resources included in them. *AASL Standards Framework for Learners (pamphlet) *Shared Foundation Infographics - National School Library Standards (Click on each Shared Foundation) 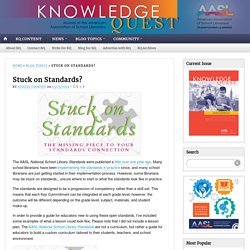 Many school librarians have been implementing the standards in practice since, and many school librarians are just getting started in their implementation process. However, some librarians may be stuck on standards,, unsure where to start or what the standards look like in practice. The standards are designed to be a progression of competency rather than a skill set. This means that each Key Commitment can be integrated at each grade level; however, the outcome will be different depending on the grade level, subject, materials, and student make-up.

Kathy Mansfield is the library media/textbooks consultant for the Kentucky Department of Education (KDE) and served as a member of the AASL Standards and Guidelines Editorial Board. 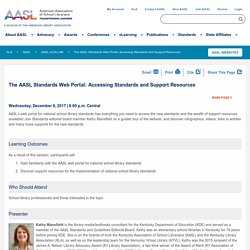 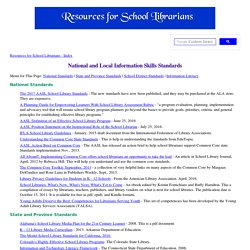 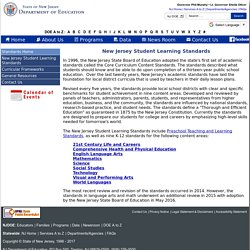 The standards described what students should know and be able to do upon completion of a thirteen-year public school education. Over the last twenty years, New Jersey's academic standards have laid the foundation for local district curricula that is used by teachers in their daily lesson plans. Revised every five years, the standards provide local school districts with clear and specific benchmarks for student achievement in nine content areas. Developed and reviewed by panels of teachers, administrators, parents, students, and representatives from higher education, business, and the community, the standards are influenced by national standards, research-based practice, and student needs. The most recent review and revision of the standards occurred in 2014. NYC: InformationFluencyContinuum. ISTE & Librarians. 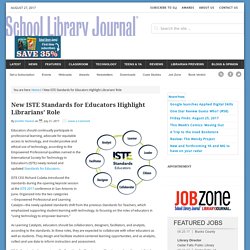 ISTE CEO Richard Culatta introduced the standards during the opening keynote session at the ISTE 2017 conference in San Antonio in June. Organized into the two categories—Empowered Professional and Learning Catalyst—the newly updated standards shift from the previous Standards for Teachers, which emphasized supporting student learning with technology, to focusing on the roles of educators in “using technology to empower learners.” As Learning Catalysts, educators should be collaborators, designers, facilitators, and analysts, according to the standards. In these roles, they are expected to collaborate with other educators as well as students. For Coaches. Standards For Educators. 2b Advocate for equitable access to educational technology, digital content and learning opportunities to meet the diverse needs of all students. 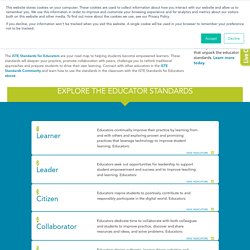 Equitable access: When all students have access to technology needed for learning and to culturally relevant curriculum and resources regardless of race, ethnicity, socio-economic status, gender identity, sexuality, ability, primary language or any other factor that might hinder or unfairly advantage one student over another. Educational technology: Devices, apps, webs resources, internet access, technology support and other digital tools used to deepen learning. Digital content: Digital content may include open educational resources (OERs); digital media and podcasts; digital curriculum, including culturally relevant curriculum; news and other websites; and digitized original or historical resources such as newspapers, virtual field trips or virtual reality (VR) software and devices.

ISTE Librarians Network. Manifesto for 21st Century Teacher Librarians. Editor’s Note: This article was originally published as a Tag Team Tech column on www.voyamagazine.com. It has been reprinted and reproduced numerous times and in many places. We are making it available here to ensure that all of our readers have seen it. Manifesto for 21st Century Teacher Librarians By Joyce Kasman Valenza October 2010 A couple of summers back a young school librarian, fresh out of library school, asked a very honest question at one of our state retreats: We’re all doing different stuff.

Well into the 21st century, it is clear that the concept of modern teacher librarian practice is not clear. What I know for sure is that if the Joyce who graduated from library school in 1976 (and again with a school specialty in 1988), heck, if the Joyce from the 2007/2008 school year, were to visit my library today, she would be stunned by the differences in my/our practice. Latest Study: A full-time school librarian makes a critical difference in boosting student achievement.