Bootstrap Alternatives: The Best 36 Options in 2020. These days, the number one requirement of any website is to run correctly on all kinds of devices (especially mobiles). 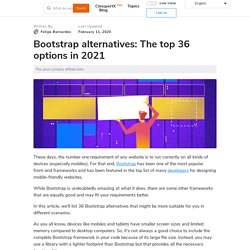 For that end, Bootstrap has been one of the most popular front-end frameworks and has been featured in the top list of many developers for designing mobile-friendly websites. While Bootstrap is undoubtedly amazing at what it does, there are some other frameworks that are equally good and may fit your requirements better. In this article, we'll list 36 Bootstrap alternatives that might be more suitable for you in different scenarios. As you all know, devices like mobiles and tablets have smaller screen sizes and limited memory compared to desktop computers. So, it's not always a good choice to include the complete Bootstrap framework in your code because of its large file size. There are tons of other reasons that may convince you to have a sneak peek at some available alternatives to Bootstrap. Sans titre. Flexbox Grid. Responsive Responsive modifiers enable specifying different column sizes, offsets, alignment and distribution at xs, sm, md & lg viewport widths. 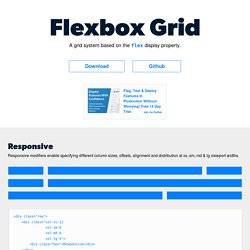 Top 5 Bootstrap Alternatives. Bootstrap is everywhere, but it’s not always the right tool for the job. 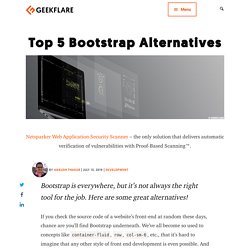 Here are some great alternatives! If you check the source code of a website’s front-end at random these days, chance are you’ll find Bootstrap underneath. We’ve all become so used to concepts like container-fluid, row, col-sm-6, etc., that it’s hard to imagine that any other style of front end development is even possible. And so when we have to build the next project, we reach for Bootstrap unconsciously. Primitive UI - CSS Framework & Sass Boilerplate. Quiz: What CSS framework should you use? CSS has many positive attributes but it can also be a real nightmare. 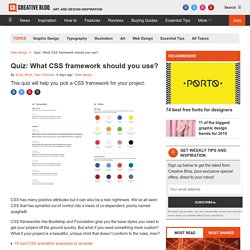 We’ve all seen CSS that has spiralled out of control into a mess of co-dependent, poorly named spaghetti. CSS frameworks like Bootstrap and Foundation give you the base styles you need to get your project off the ground quickly. But what if you need something more custom? IotaCasts - Learn how to build scalable interfaces from the creators of iotaCSS. Tailwind CSS - A Utility-First CSS Framework for Rapid UI Development.

While waiting on Bootstrap v4 to come out of beta, I went looking for other frameworks, especially flexbox based ones. Bulma to the rescue! Bulma is built by Jeremy Thomas and is fully open source. The modern design and layout features Bulma offers were the main reasons we chose to use it for Scotch. 6 Popular CSS Frameworks to Use in 2019. TACHYONS - Css Toolkit. Get to Know Bulma: My Current Favorite CSS Framework. HTML5 Authoring - HTML5 Framework. 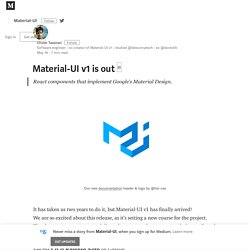 We are so excited about this release, as it’s setting a new course for the project. Thank you to everyone, especially to the team, and to everyone who’s contributed code, issue triage, and support. Thank you. See the 1.0.0 Release Note on GitHub. The 5 Most Popular Front-end Frameworks Compared. There’s a deluge of CSS front-end frameworks available nowadays. 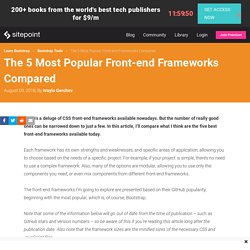 But the number of really good ones can be narrowed down to just a few. In this article, I’ll compare what I think are the five best front-end frameworks available today. Each framework has its own strengths and weaknesses, and specific areas of application, allowing you to choose based on the needs of a specific project. For example, if your project is simple, there’s no need to use a complex framework.

Also, many of the options are modular, allowing you to use only the components you need, or even mix components from different front-end frameworks. The front-end frameworks I’m going to explore are presented based on their GitHub popularity, beginning with the most popular, which is, of course, Bootstrap. Note that some of the information below will go out of date from the time of publication – such as GitHub stars and version numbers – so be aware of this if you’re reading this article long after the publication date. 1. 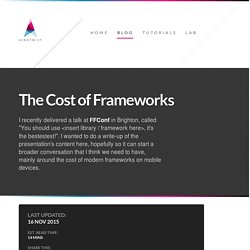 The 5 Most Popular Frontend Frameworks of 2017 Compared — SitePoint. This article was updated on May 17, 2017, to reflect the current status of the features present in the front-end frameworks listed below. 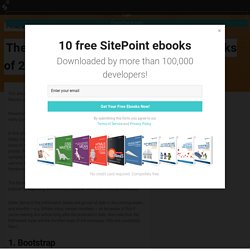 Nowadays there is a deluge of CSS front-end frameworks. But the number of really good ones can be narrowed down to just a few. UIkit. Topcoat. Basscss. Gridpak - The Responsive grid generator. Simple Grid. GroundworkCSS ♥ A Responsive HTML5, CSS & Javascript Framework. The Ultimate SASS Resources & Tools. The best collection of SASS resources & tools for web developers. 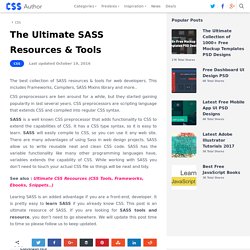 This includes Frameworks, Compilers, SASS Mixins library and more.. 15 Interesting JavaScript and CSS Libraries for March 2017. Danny Markov Our mission at Tutorialzine is to keep you up to date with the latest and coolest trends in web development. 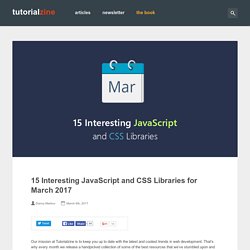 That’s why every month we release a handpicked collection of some of the best resources that we’ve stumbled upon and deemed worthy of your attention. La mort des gros frameworks CSS ? Découvrez 5 Frameworks CSS légers dans les tendances ! Concise Framework. Top 25+ Best CSS Framework 2016 for Web Designers. We already wrote an article about Responsive CSS frameworkbut today we bring you a lot more best CSS framework 2016 for a designer to choices and build their website within a less time frame. The purpose of today’s posts to expand the list of frameworks and provide you more free CSS framework over the internet.

Beaucoup de questions posées au sujet de KNACSS me laissent penser que cet outil, comme ses confrères, est parfois mal employé. FRAMEWORKS CSS vs bootstrap - AntheDesign. Il n'y a pas que Bootstrap dans la vie ! What are Frameworks? 22 Best Responsive CSS Frameworks for Web Design. This post aims to present what frameworks are and what they are used for, alongside a selection of the best that can be got for free on the internet. In this way, we want to help web designers and developers who are starting out to discover new resources and possibilities, as well as setting out concepts that can sometimes be too abstract for those who have already travelled far in the world of web design.

Cascading Style Sheets (CSS) is what gives the web its cozy looks. Writing plain HTML is a thing of a very distant past, and the language itself (CSS) has advanced so much in the recent years that it’s impossible to imagine what the web would look like without it. In the early days, much of webs styling could be achieved through HTML usage, while nowadays both HTML5 and CSS3 work closely together to achieve startling results in web design, application design, and in some cases even software design. It’s an evolving styling language. Web designer communities such as CodePen have enabled for designers and creative artists to understand more the full capacity of CSS3 features, and each day hundreds of new and inspirational concepts are being added to the CodePen community for indulging, exploring, and reusing within others own projects; tune in the Radio Station (Podcast) to get a weekly update on all the best stuff happening in the world of style sheets.