People are Demanding ‘Non-PC’ Comments on Terrorism — So Here’s the Mother of Them All. I’m seeing a ton of vitriolic comments all over Facebook, Twitter and other social sites about how we need to “stop being PC” and really address the terrorist issue by “really talking about what’s happening” without “censoring ourselves” to make everybody else comfortable. 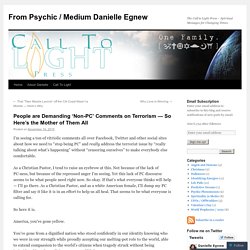 As a Christian Pastor, I tend to raise an eyebrow at this. Not because of the lack of PC-ness, but because of the repressed anger I’m seeing. Yet this lack of PC discourse seems to be what people need right now. So okay. If that’s what everyone thinks will help — I’ll go there. So here it is. America, you’ve gone yellow. Stop it. Get your intellect and your decorum back. Yesterday when I pastored church, I addressed how to curtail our need to demonize that which frightens us. I’m stunned by the amount of hyper-paranoia over one world religion because of a few minority extremist sects. How frightened we have become, America? Don’t turn into the people that terrify you. So how are you enjoying our non-PC discourse?

Def Poetry - Amiri Baraka - Why is We Americans. Surveillance Blowback: The Making of the U.S. Surveillance State, 1898-2020. The American surveillance state is now an omnipresent reality, but its deep history is little known and its future little grasped. 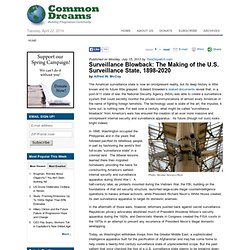 Edward Snowden’s leaked documents reveal that, in a post-9/11 state of war, the National Security Agency (NSA) was able to create a surveillance system that could secretly monitor the private communications of almost every American in the name of fighting foreign terrorists. The technology used is state of the art; the impulse, it turns out, is nothing new. For well over a century, what might be called “surveillance blowback” from America’s wars has ensured the creation of an ever more massive and omnipresent internal security and surveillance apparatus.

Its future (though not ours) looks bright indeed. Photo: Nicolas Nova/cc/flickr In 1898, Washington occupied the Philippines and in the years that followed pacified its rebellious people, in part by fashioning the world’s first full-scale “surveillance state” in a colonial land. American Blueprint. Lauryn Hill Rant: Singer Vents About Racism, Slavery And The IRS In Open Letter. The concept of reverse racism is flawed, if not absolutely ridiculous. 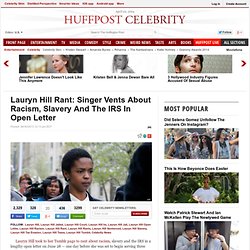 Most, if not all of the negative responses from people of color toward white people, are reactions to the hatred, violence, cruelty and brutality that they were shown by white people for centuries. Much of the foundation of the modern world was built on the forced free labor of black peoples. The African Slave Trade, the institution of slavery, colonialism, its derivative systems, and the multiple holocausts throughout history, where whites used race as the defining reason to justify their oppression, conquest, and brutal treatment of non-white peoples, are how race became such a factor to begin with. 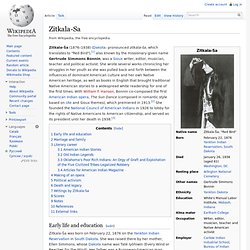 She wrote several works chronicling her struggles in her youth as she was pulled back and forth between the influences of dominant American culture and her own Native American heritage, as well as books in English that brought traditional Native American stories to a widespread white readership for one of the first times. With William F. Hanson, Bonnin co-composed the first American Indian opera, The Sun Dance (composed in romantic style based on Ute and Sioux themes), which premiered in 1913.[2] She founded the National Council of American Indians in 1926 to lobby for the rights of Native Americans to American citizenship, and served as its president until her death in 1938.[3] Early life and education[edit] Zitkala-Ša with her violin in 1898 Literary career[edit]

The most honest three and a half minutes of television, EVER... To be continued.