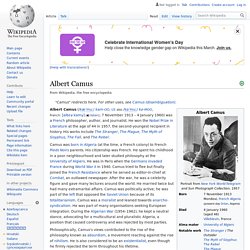 He is also considered to be an existentialist, even though he firmly rejected the term throughout his lifetime. Life[edit] Early years and education[edit] A 20th-century postcard of the University of Algiers. Delphine de Vigan - Wikipedia. Delphine de Vigan (born 1 March 1966) is an award-winning French novelist. 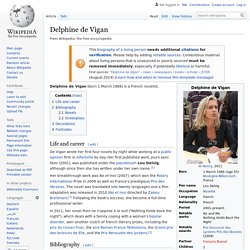 Life and career[edit] De Vigan wrote her first four novels by night while working at a public opinion firm in Alfortville by day. Her first published work, Jours sans faim (2001), was published under the pseudonym Lou Delvig, although since then she has written under her own name.[1] Her breakthrough work was No et moi (2007), which won the Rotary International Prize in 2009 as well as France's prestigious Prix des libraires. The novel was translated into twenty languages and a film adaptation was released in 2010 (No et moi directed by Zabou Breitman).[2] Following the book's success, she became a full-time professional writer. Faïza Guène - Wikipedia. Faïza Guène is a French writer and director. 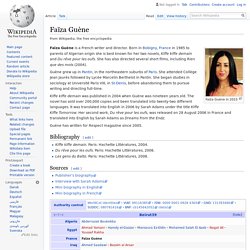 Born in Bobigny, France in 1985 to parents of Algerian origin she is best known for her two novels, Kiffe kiffe demain and Du rêve pour les oufs. She has also directed several short films, including Rien que des mots (2004). Guène grew up in Pantin, in the northeastern suburbs of Paris. She attended Collège Jean Jaurès followed by Lycée Marcelin Berthelot in Pantin.

She began studies in sociology at Université Paris VIII, in St-Denis, before abandoning them to pursue writing and directing full-time. Kiffe kiffe demain was published in 2004 when Guène was nineteen years old. Guène has written for Respect magazine since 2005. Guillaume Musso - Wikipedia. Guillaume Musso in Venice Guillaume Musso (French pronunciation: ​[ɡijom myso]; born 6 June 1974) is a French novelist. 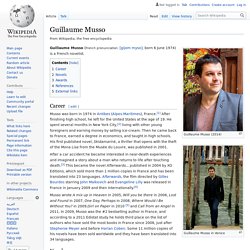 Career[edit] Musso was born in 1974 in Antibes (Alpes-Maritimes), France.[1] After finishing high school, he left for the United States at the age of 19. Jean-Jacques Sempé - Wikipedia. Jean-Jacques Sempé, usually known as Sempé (French: [sɑ̃pe]; born 17 August 1932), is a French cartoonist. 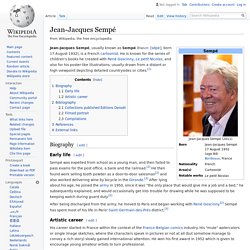 He is known for the series of children's books he created with René Goscinny, Le petit Nicolas, and also for his poster-like illustrations, usually drawn from a distant or high viewpoint depicting detailed countrysides or cities.[1] Biography[edit] Early life[edit] Sempé was expelled from school as a young man, and then failed to pass exams for the post office, a bank and the railroad.[2] He then found work selling tooth powder as a door-to-door salesman[2] and also worked delivering wine by bicycle in the Gironde.[3] After lying about his age, he joined the army in 1950, since it was “the only place that would give me a job and a bed,” he subsequently explained, and would occasionally get into trouble for drawing while he was supposed to be keeping watch during guard duty.[2] Artistic career[edit] His career started in France within the context of the Franco-Belgian comics industry. 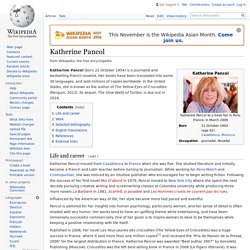 Her books have been translated into some 30 languages, and sold millions of copies worldwide. In the United States, she is known as the author of The Yellow Eyes of Crocodiles (Penguin, 2013). Its sequel, The Slow Waltz of Turtles, is due out in 2016. Life and career[edit] Influenced by the American way of life, her style became more fast paced and eventful. Pancol is admired for her insights into human psychology, particularly women, and her sense of detail is often shaded with wry humor. Published in 2006, her novel Les Yeux jaunes des crocodiles (The Yellow Eyes of Crocodiles) was a huge success in France, where it sold more than one million copies[1] and received the "Prix de Maison de la Presse, 2006" for the largest distribution in France. Katherine Pancol is divorced and has two grown children. Marc Levy - Wikipedia. Marc Levy (born 16 October 1961) is a French novelist. 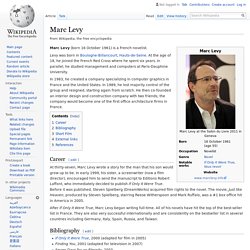 Levy was born in Boulogne-Billancourt, Hauts-de-Seine. At the age of 18, he joined the French Red Cross where he spent six years. Tatiana de Rosnay - Wikipedia. Tatiana de Rosnay (born 28 September 1961) is a French journalist, writer and screenwriter. 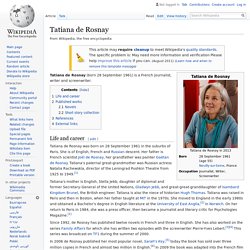 Life and career[edit] Tatiana de Rosnay was born on 28 September 1961 in the suburbs of Paris. She is of English, French and Russian descent. Her father is French scientist Joël de Rosnay, her grandfather was painter Gaëtan de Rosnay. Tatiana's paternal great-grandmother was Russian actress Natalia Rachewskïa, director of the Leningrad Pushkin Theatre from 1925 to 1949.[1]