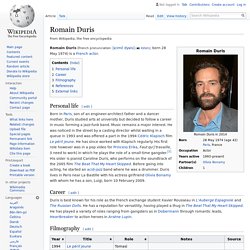 Personal life[edit] Born in Paris, son of an engineer-architect father and a dancer mother, Duris studied arts at university but decided to follow a career in music forming a jazz-funk band. Music remains a major interest. He was noticed in the street by a casting director whilst waiting in a queue in 1993 and was offered a part in the 1994 Cédric Klapisch film Le péril jeune. He has since worked with Klapisch regularly. Mélanie Laurent - Wikipedia. Mélanie Laurent (French pronunciation: [melani loʁɑ̃]; born 21 February 1983) is a French actress, singer, screenwriter and director. 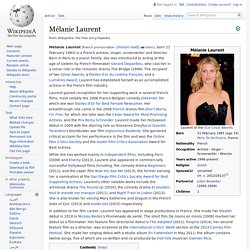 Born in Paris to a Jewish family, she was introduced to acting at the age of sixteen by French filmmaker Gérard Depardieu, who cast her in a minor role in the romantic drama The Bridge (1999). The recipient of two César Awards, a Étoiles d'or du cinéma français, and a Lumières Award, Laurent has established herself as an accomplished actress in the French film industry.

Laurent gained recognition for her supporting work in several French films, most notably the 2006 Franco-Belgian comedy Dikkenek, for which she won Étoiles d'Or for Best Female Newcomer. Her breakthrough role came in the 2006 French drama film Don't Worry, I'm Fine, for which she later won the César Award for Most Promising Actress, and the Prix Romy Schneider. Jean Dujardin - Wikipedia. Early life[edit] Jean Dujardin was born on 19 June 1972 and raised in Rueil-Malmaison (Hauts-de-Seine, Île-de-France region), a commune in the western suburbs of Paris, France.[2] After attending high school, he went to work for the construction company of his father, Jacques Dujardin.[3][4] Dujardin began contemplating a career in acting while serving his mandatory military service a few years later.[3] Career[edit] Dujardin began his acting career performing a one-man show he wrote in various bars and cabarets in Paris.[3] He first gained attention when he appeared on the French talent show Graines de star in 1996 as part of the comedy group Nous Ç Nous, which was formed by members of the Carré blanc theater. 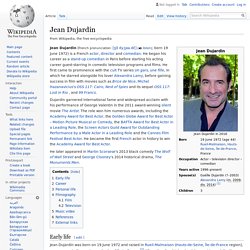 From 1999 to 2003, Dujardin starred in the France production of the originally Canadian comedy series Un gars, une fille, alongside his future wife Alexandra Lamy, before transitioning to a career in film. Jean Reno - Wikipedia. Early life[edit] Reno was born Juan Moreno y Herrera-Jiménez[2][3] in Casablanca, Morocco. 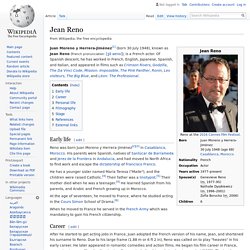 His parents were Spanish, natives of Sanlúcar de Barrameda and Jerez de la Frontera in Andalucia, and had moved to North Africa to find work and escape the dictatorship of Francisco Franco. He has a younger sister named María Teresa ("Maite"), and the children were raised Catholic.[4] Their father was a linotypist.[5] Their mother died when he was a teenager.[4] He learned Spanish from his parents, and Arabic and French growing up in Morocco. At the age of seventeen, he moved to France, where he studied acting in the Cours Simon School of Drama.[6] When he moved to France he served in the French Army which was mandatory to gain his French citizenship. Marion Cotillard - Wikipedia. Early life[edit] Cotillard was born in Paris, and grew up around Orléans,[1] in an artistically inclined, "bustling, creative household". 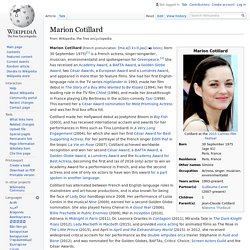 Her father, Jean-Claude Cotillard, is an actor, teacher, former mime, and 2006 Molière Award-winning director of Breton descent.[5] Cotillard's mother, Niseema Theillaud, who has Kabyle ancestry,[6][7] is also an actress and drama teacher.[8] Her two younger brothers Quentin and Guillaume are twins. Guillaume is a screenwriter and director. Cotillard began acting during her childhood, appearing in one of her father's plays.[9] Audrey Tautou - Wikipedia. Tautou achieved international recognition for her lead role in the 2001 film Amélie, which met with critical acclaim and was a major box-office success. 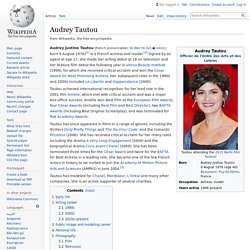 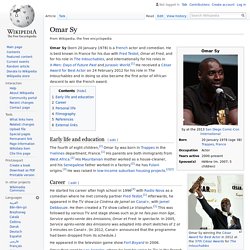 He is best known in France for his duo with Fred Testot, Omar et Fred, and for his role in The Intouchables, and internationally for his roles in X-Men: Days of Future Past and Jurassic World.[1] He received a César Award for Best Actor on 24 February 2012 for his role in The Intouchables and in doing so also became the first actor of African descent to win the French award. Early life and education[edit] The fourth of eight children,[2] Omar Sy was born in Trappes in the Yvelines department, France.[1] His parents are both immigrants from West Africa.[2] His Mauritanian mother worked as a house-cleaner, and his Senegalese father worked in a factory.[2] He has Fulani origins.[3] He was raised in low-income suburban housing projects.[2][3] Career[edit] Omar then went to Los Angeles, where he lent his voice to Zip in the French version of the Tomb Raider Legend video game.